Little Friday evening news for ya, boys and girls. The cast of Episode IX is official, Luke Skywalker’s back, LANDO MOTHAFUCKIN’ CALRISSIAN’S BACK, and everyone else you’d expect to be in the final installment to the Skywalker Saga as well (Daisy Ridley, Adam Driver, John Boyega, Oscar Isaac, Domhnall Gleeson, etc). Seeing as though Kelly Marie Tran is also back reprising her role as Rose Tico, I’m sure half of the internet has already decided that this movie raped their childhood in the ass, but that is what it is.

Even though we’re still over a year away from the Lucasfilm fanfare and “A long time ago, in a galaxy far, far away…” gracing the screen once again, I’m getting so giddy just thinking about seeing Lando back in the mix and interacting with these new characters. Maybe he’ll somehow get the Falcon back but ultimately give it to Rey at the end of the film? I think that’d be a really awesome way to finalize the passing of the torch to this generation. I could see Kylo somehow destroying the Falcon though, because if they run out of classic characters to kill, the ship that made the Kessel Run in under 12 parsecs may have to fill that role. Also, my best pal Mark Hamill is back as Luke Skywalker, so we’re gonna see some sick Force Ghost action! Hopefully he’s not the only one, either. I want Force Ghost Luke, Yoda, Obi-Wan, Qui-Gon, AND Anakin to train Rey in this flick. Take this fan art and crank that shit to 11! Mace too! Get that purple-sabered son of a bitch out to Ahch-To too. 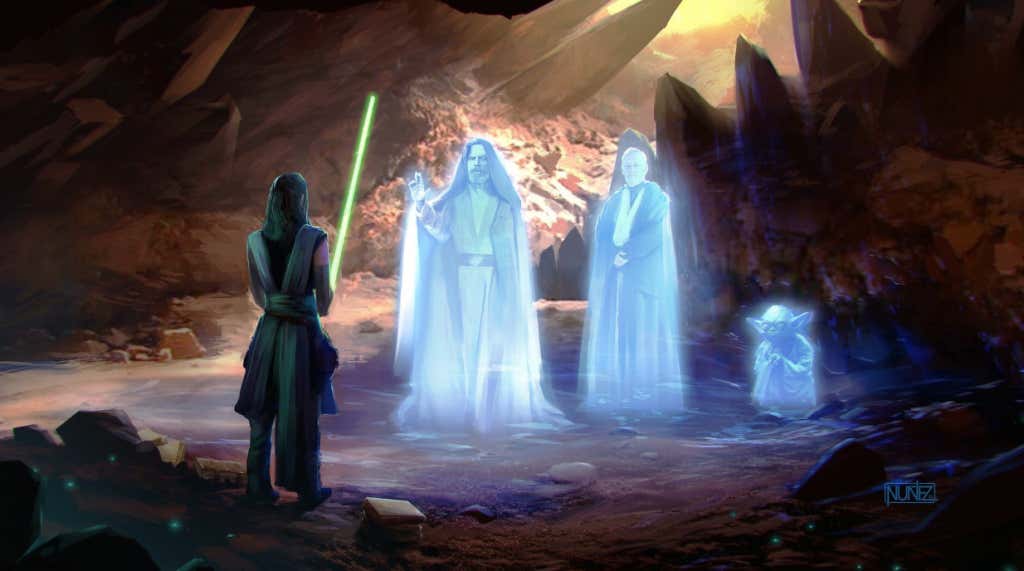 Now obviously there’s been a ton of questions about how Carrie Fisher’s death will affect Leia Organa’s role in Episode IX, and we finally got an answer to that question (sort of) in this press release:

The role of Leia Organa will once again be played by Carrie Fisher, using previously unreleased footage shot for Star Wars: The Force Awakens. “We desperately loved Carrie Fisher,” says Abrams. “Finding a truly satisfying conclusion to the Skywalker saga without her eluded us. We were never going to recast, or use a CG character. With the support and blessing from her daughter, Billie, we have found a way to honor Carrie’s legacy and role as Leia in Episode IX by using unseen footage we shot together in Episode VII.”

Sooooo, this pretty much sounds like the best thing they possibly could’ve done. I didn’t even know this was a possibility. I never wanted a recasting for Episode IX, and I definitely never wanted CGI, because honestly I felt it’d be super disrespectful to do. Carrie is Leia and Leia is Carrie. Nobody else will ever capture her energy and tone. But if this cut footage from ‘The Force Awakens’ works, I think there’s a chance for the character to have a beautiful sendoff, and I know that as a Star Wars fan, it’ll provide a little closure for those of us still mourning. If the footage involves Billie interacting with her even a little bit, though, I’m going to flat-out sob in the theater. Luke’s “Nobody’s ever really gone” scene in ‘The Last Jedi’ did all the heavy lifting, but Carrie talking to her daughter in her final on-screen appearance ever would send me over the emotional ledge.

And to not end this blog on such a downer…Maz Kanata’s back! Yay!