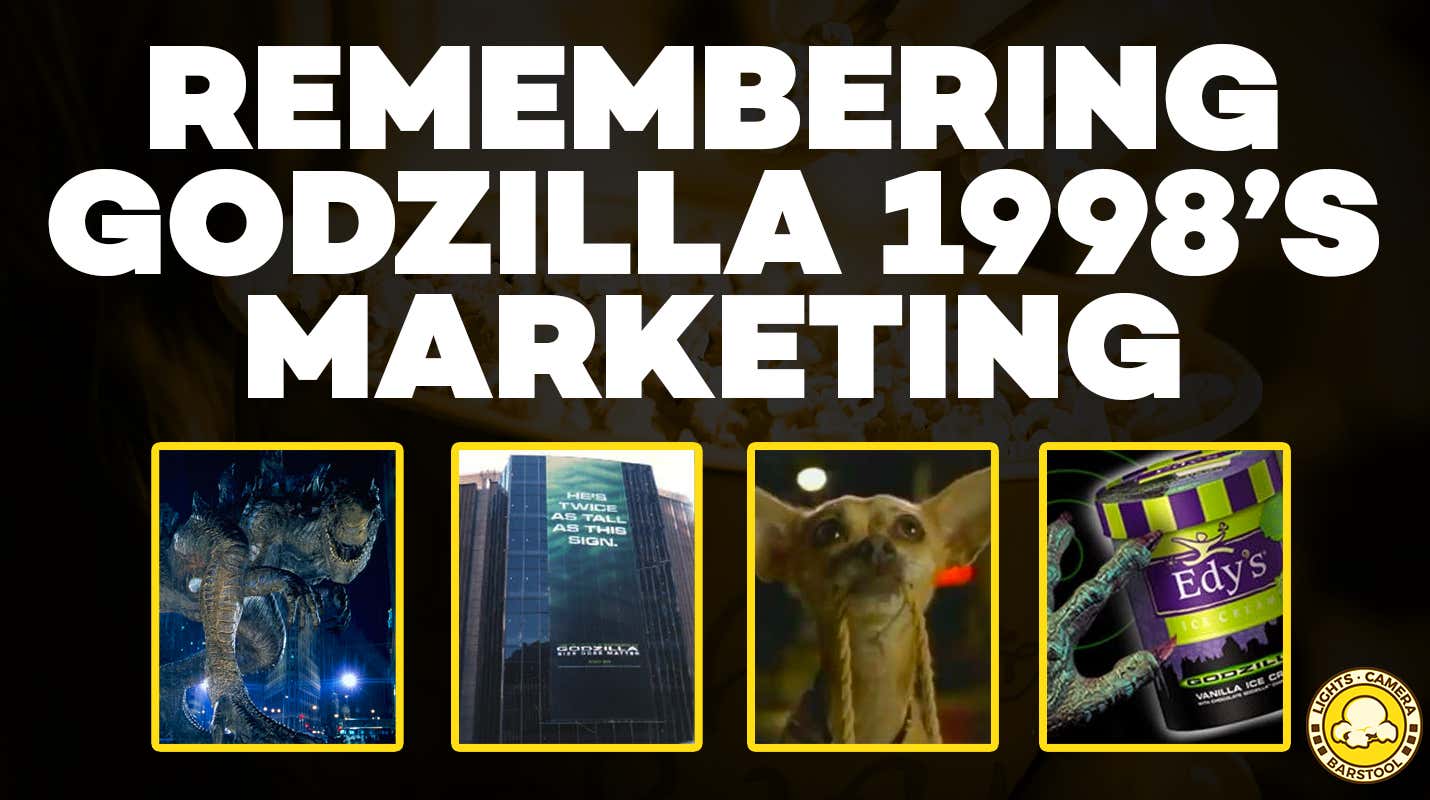 With the release of the first trailer for ‘Godzilla: King of the Monsters’, sequel to the 2014 ‘Godzilla’, I felt it was a great time to look back on the wild marketing campaign for the dreadful 1998 ‘Godzilla’ movie. The marketing campaign for ‘Godzilla’, which celebrated its 20 Year Anniversary back in May, is still considered one of the craziest of all time. Despite recent high dollar pushes for massive blockbusters from franchises like ‘Fast and the Furious’, ‘Star Wars’ and Marvel movies, nothing ever really compares to how memorable the all-out marketing blitz was for the 1998 ‘Godzilla’ movie. From a ridiculous slogan to food commercials, toys and more, despite only being 7 years old at the time, I still remember every bit of that campaign, even if the movie is hot garbage.

The trailers for ‘Godzilla’ were unique for two reasons: they never showed the full monster and they didn’t use any voiceovers. In an age where trailers sometimes reveal too much, I respect the move from Roland Emmerich and Sony to not show the monster. A big reveal for the actual movie is something I wish happened more often. Now, yes, the monster is hands down the shittiest looking Godzilla ever made, so I am sure it helped to not show it and piss people off, but I still love the move. The first teaser trailer, released a year before the movie came out, cost Roland Emmerich $600,000 to make and showed Godzilla stepping on a T-Rex skeleton.

Not bad, I guess, especially for a teaser. This was the type of trailer we basically got the rest of the way for the movie. Shots of every part of Godzilla, minus the head, as he destroyed various parts of New York City. The full trailer showed a lot of him, as you can see below, but also featured no voiceover whatsoever.

This was pretty rare for a movie in the 1990’s, especially one to the magnitude of ‘Godzilla’. There was no “In a world…” guy talking over the trailer, but instead just dramatic shots, people screaming and the tease of the crazy monster. People were actually excited to see the dinosaur reveal for quite some time and the movie garnered a ton of hype largely due to the trailers. 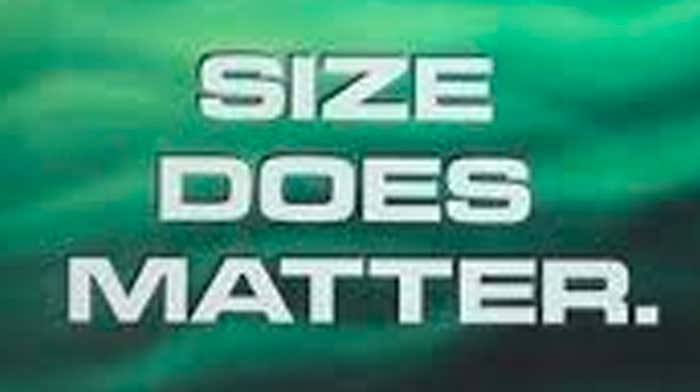 This slogan was everywhere. I imagine that every famous building in New York City had a massive “Size Does Matter” billboard next to it. They all had variations of the slogan and with a phrase depicting how big Godzilla would be. For example, a city bus had an arrow across its side saying, “His Foot Is As Long As This Bus.” 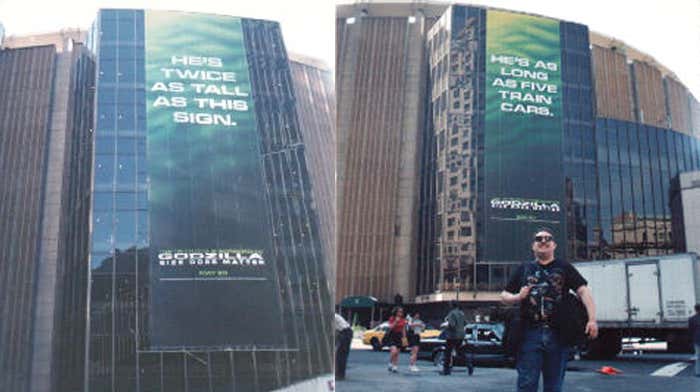 I guess they accomplished their goal because I still remember the campaign 20 years later, but that doesn’t take away from how absurd it was. The funniest part about the slogan is that the 1998 Godzilla is only 197 feet tall, which is almost half as small as the newest Godzilla. That’s weak.

This may be the most memorable part of the campaign, mostly because of the Taco Bell integration. If you were born in the early 1990’s or earlier and you don’t remember the Godzilla Taco Bell commercials, then there’s something wrong with you. The “Yo Quiero Taco Bell” chihuahua is one of the most famous food mascots ever created and starred in multiple Godzilla commercials. The most notable one is where the chihuahua, named Gidget, tries to trap Godzilla in a box and uses the lines “here lizard, lizard, lizard” and “I think I need a bigger box.”

Rest in peace to that chihuahua. I am not totally sure, but I am pretty confident the dog has to be dead at this point. I’d also be willing to bet that no one ever won that trip to New York City. Seems highly unlikely. There were a few different versions, but they all involved the chihuahua hanging out with Godzilla.

I went to Taco Bell a lot back when ‘Godzilla’ was getting ready to come out and the commercials were a big reason why. The other reason? The toys. 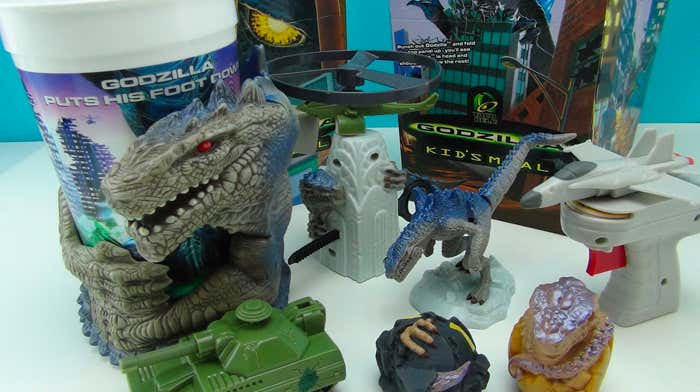 I personally loved the Chrysler Building helicopter toy (also, props for using the Chrysler Building and not the Empire State Building). But most people will remember the Godzilla window cupholder because it was massive and very visible. It also seemed like this was an absolute disaster waiting to happen. Having a massive drink attached to your moving car’s window is just you begging to have your Pepsi spilled all over the front seat. 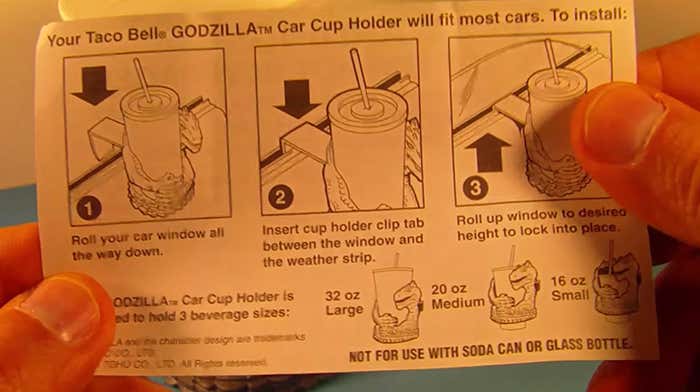 Yum! Brands also had ‘Godzilla’ integration with Pizza Hut and KFC. The KFC integration was the Godzilla Monster Meal that included actual French fries. Not the usual steak fries from KFC, but the actual regular fast food French fries. What a world. 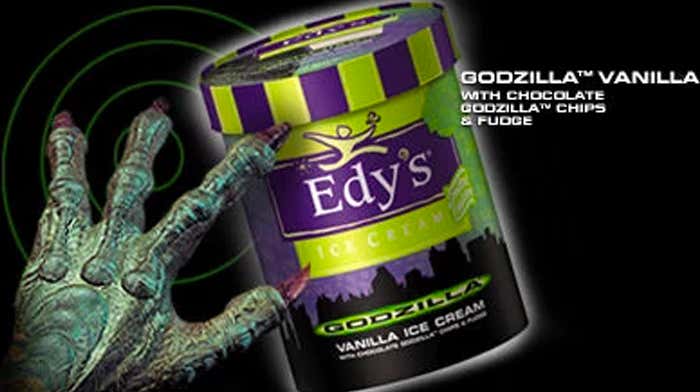 Lastly, the food I liked the most from this campaign was easily the special edition Godzilla Edy’s ice cream. 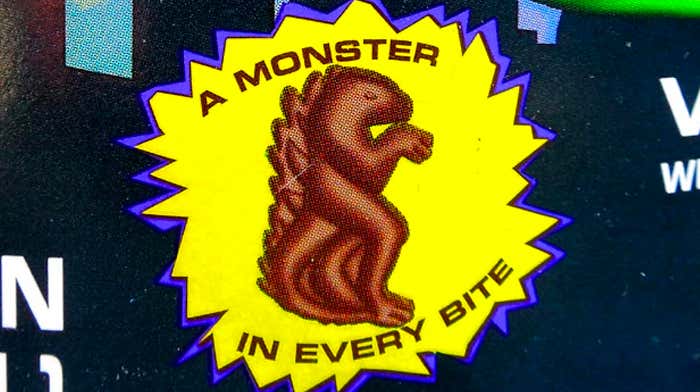 The little Godzilla chocolate chunks were delicious, especially with the fudge. To celebrate 20 years, Edy’s should really bring this flavor back.

You couldn’t make a movie in the 1990’s without having a killer line of merchandise. They released a ton of toys for this movie, including the highly coveted Matthew Broderick action figure and a Brooklyn Bridge battle set. 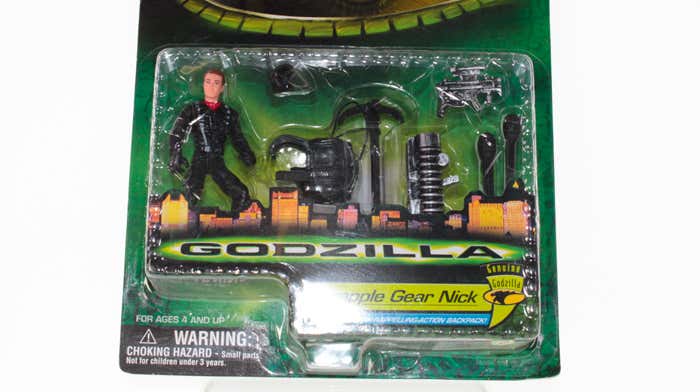 The coolest toys, that I was never able to get, were the 11-inch and 21-inch Godzilla action figures. 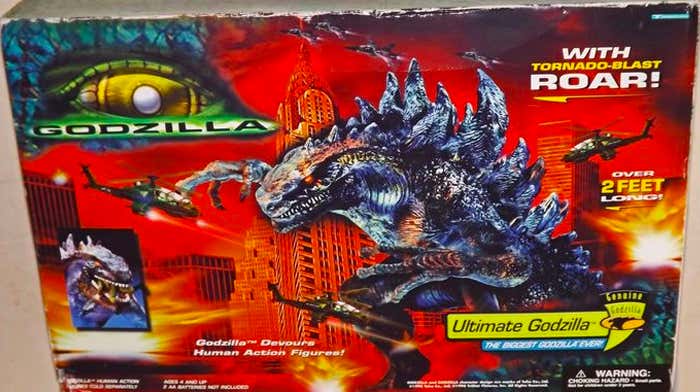 The merchandising for the movie was actually a massive flop and didn’t sell well at all. Which is even crazier considering this was the fucking in-store display for the toys. 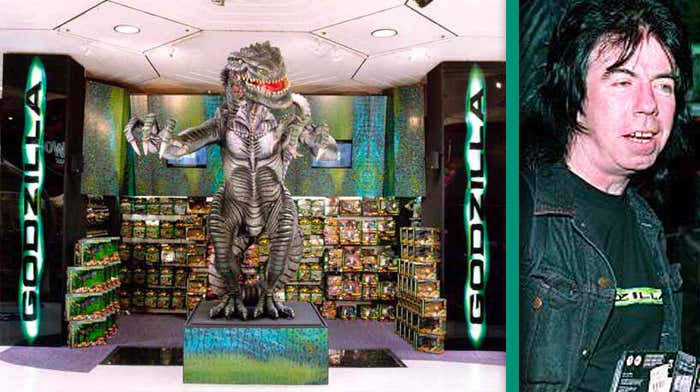 Look at that thing! It’s insane. But hey, at least this British rock band looking guy was pumped to get some new toys for one of the worst looking movie monsters ever put on the big screen.

Never forget the absurd Puff Daddy song and music video for “Come With Me,” which used “Kashmir” by Led Zepplin, released in conjunction with this movie.

‘Godzilla’ 1998 is a total dumpster fire of a movie. The monster was turned into some weird Jurassic Park thing (probably on purpose), the Matthew Broderick stuff was strange and it set up a sequel that never happened with the baby Godzillas being born inside Madison Square Garden. Did you know that the baby Godzillas were actually humans in suits? It’s a true story. 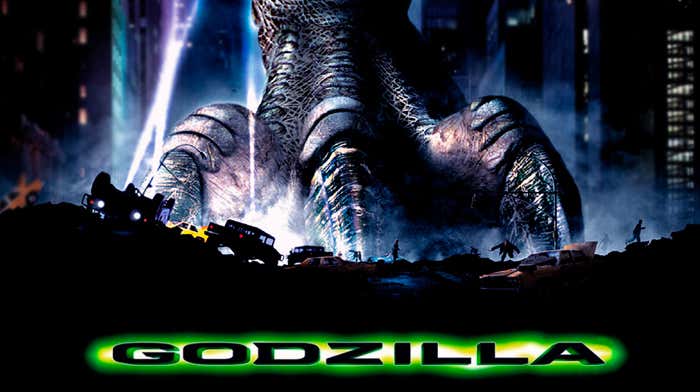 Despite being an awful movie, it still holds a lot of meaning to me as it was one of the first movie campaigns I remember getting excited about as a kid. It will always qualify as a massive “so bad it’s good” summer blockbuster.

—
Make sure to subscribe to Lights, Camera, Barstool by clicking here and rate all 2018 movies in the links below.