TALK THAT SHIT JEROME! TALK THAT SHIT!!! I have to admit that when I started logging onto the World Wide Web in the mid-90s, I never thought I would see the internet would evolve to a point where I could watch quiet-as-a-church mouse Jerry Rice would turn into a WWE wrestler right in front of my eyes and rant about how he’s the greatest fucking football player ever before making an entire room chant “JERRY JERRY JERRY” like a goddamn Jerry Springer audience. But I’m happy we are here. Shout out Al Gore and Dave Portnoy for inventing the internet and making this all possible.

Now I’ll admit that I have no clue how Jerry got whipped up into that frenzy. Maybe Charles Barkley turned into Grandpa Simpson yelling at a cloud again and said NFL players are just like NBA players, which means the ones from the 90s are much better than the ones today no matter what our eyes, brains, or stats say. Or maybe Jerry was tired of seeing all the Terrell Owens love on Twitter since it’s the place you are told your favorite things you grew up thinking were the best actually weren’t good at all. Jerry probably saw the word GOAT put near TO’s name too many times since Jerry is a a 3-time Super Bowl champion, 10-time All Pro, as well as the all-time leader in receptions, receiving yards, and receiving touchdowns by a significant margin. 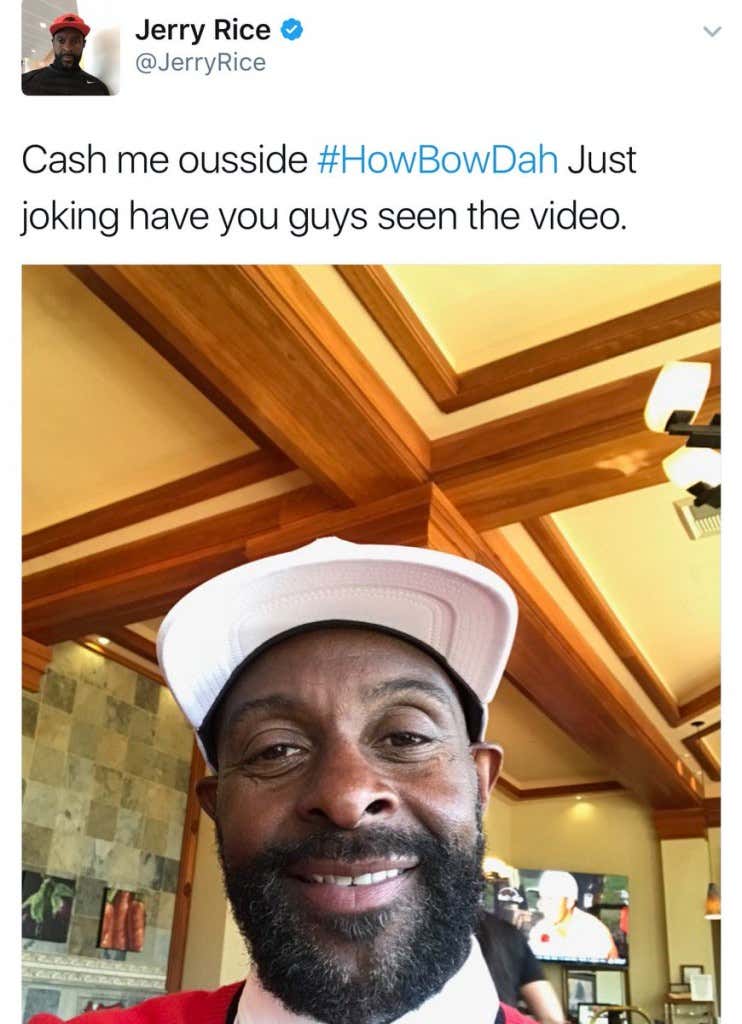 You don’t just start rattling off every single one of your stats to the third decimal spot that apparently include non-receiving touchdowns and yards unless you have been quietly stewing about something. Maybe this goes back to Tom Brady locking up NFL GOAT status in the world’s eyes after he got the one for the thumb by engineering the greatest comeback in Super Bowl history. People have always talked about Brady’s legendary drive and how he became Alex Guerrero’s personal science experiment that had avocado ice cream shoved down his throat. Meanwhile, the entire world conveniently forgot that Jerry Rice used to run The Hill, which was the scariest thing a fat kid like myself ever saw pretty much every time the 49ers were on nationally televised games, which was a lot.

Who’s the true GOAT after watching that? You tell me.