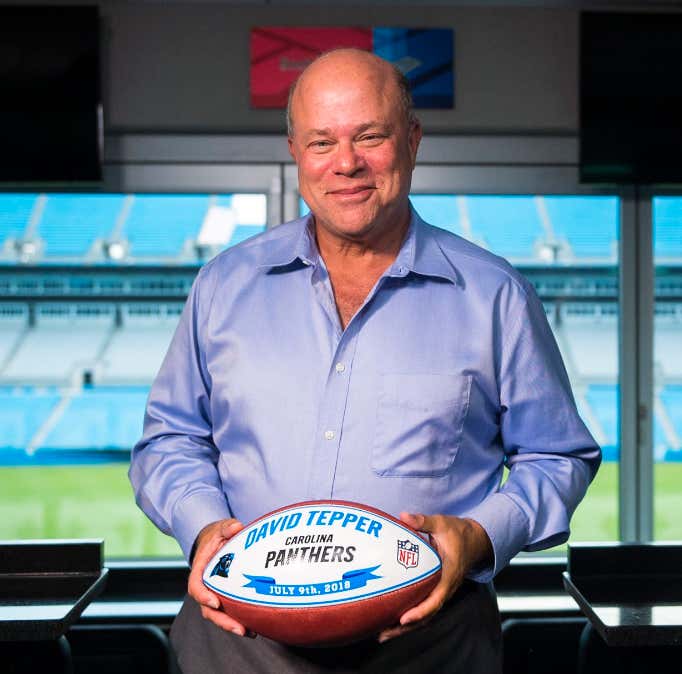 Before we get to Mr. Tepper’s comments on gambling, it would be a crime to not mention how much of a rich guy move it is to have your 2 top buttons unbuttoned when being introduced as an NFL owner.

Tepper is worth 11 billion, and Forbes has him as the richest man in New Jersey thanks to founding a global hedge fund. The global hedgehog has made his fair share of great business decisions, but I can’t agree less with this take:

This is the furthest thing from the truth. There is are a lot of factors that have led to the NFL owning a day of the week from September through the first weekend of February, but one of the biggest is gambling/fantasy. You think 10.6 million people are tuning into a color rush Thursday Night Football game between 4-9 Broncos against the 3-10 Colts if there isn’t money on the line? Negative.

Since the Supreme Court allowed for gambling to be legal on a state by state basis, the NFL continues to galivant with virtue signals about “protecting the integrity of the game.”

SOURCE- Wegner: What threats are there to the integrity of pro football in the United States?

SOURCE-Goodell said in a statement said that his main priority was protecting the integrity of the sport.

“Our fans, our players and our coaches deserve to know that we are doing everything possible to ensure no improper influences affect how the game is played on the field. Last week’s ruling by the Supreme Court has no effect on that unwavering commitment,” Goodell said.

Blah, blah, blah, blah, blah. The NFL knows exactly the role of gambling and how it strengthens its product. Injury reports are required because of gambling/fantasy. Late games have been moved to 4:25 PM, instead of 4:00, in part so fans can watch the ending of their 1:00 bets and then get in last second wagers. This is no secret.

The thought that ratings will go down is nonsense. To think that there are rumors that the NFL is telling their networks to not include gambling lines in any of their pregame/in-game/postgame coverage is also nonsense.

Last year, a research report found the obvious: ratings would go up if the NFL embraced gambling.

Legal Sports Report-One potential change in the direction of viewership and ad dollars would be an evolution in the NFL’s view of legalized national sports gambling. …

Up to this point, the NFL has been reluctant to embrace [NBA Commissioner Adam] Silver’s point of view. Perhaps that would change if broader business decisions — and the health of the NFL’s TV partners — were taken more into account.

If the US were to legalize sports betting, roughly 10 percent of non-bettorswould be likely to bet on sports, which would raise the overall time spent by viewers watching NFL games.

“On a network by network business, the NFL Network and ESPN were more likely to be viewed by sports bettors versus the average viewer. These trends would be further inflated if gambling were to be legalized …. If gambling were allowed, a majority of NFL Network viewers would be sports bettors, followed closely by 47 percent on ESPN. The broadcast networks would all be closer to the 40 percent range.”

This is similar to the Nielsen Sports report that found the exact same thing in September 2016:

Legal Sports Report-That report found that legal sports betting in the US would increase viewership and engagement of NFL fans in a meaningful way.

I couldn’t find an exact report on this, but I don’t think anyone would be surprised to find if a line (e.g. Patriots are -11.5 against New York Jets. It’s 28-14 with 2:30 left in the 4th and the Jets have the ball on the Patriots 48 yard line) is in play at the end of an NFL game, viewers stay tuned in more than if the line is not.

It’s time for the NFL to embrace gambling like they did fantasy (at least publicly, instead of behind closed doors like they have for decades).