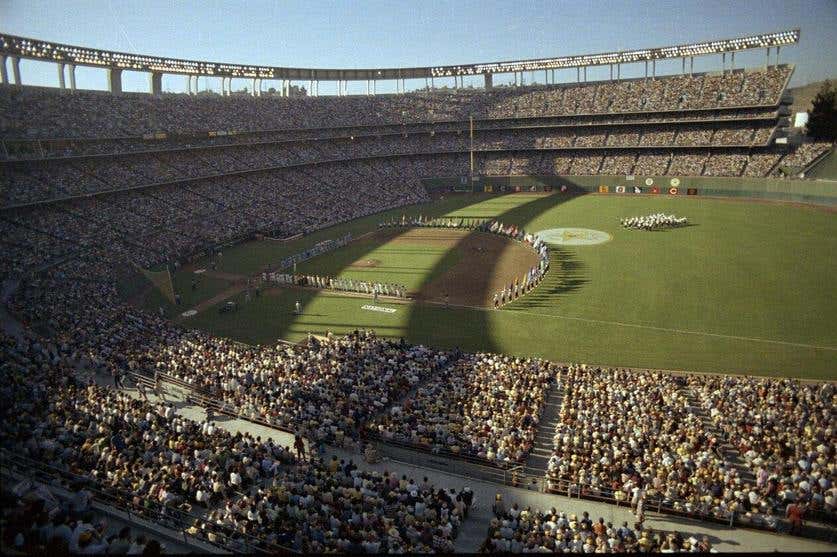 The National League continues its dominance in the All-Star Game beating the American League 7-3 at San Diego Stadium. Steve Garvey of Los Angeles Dodgers joins Willie Mays as the second player to win the All-Star Game MVP previously winning in 1974. Garvey drove in two runs to tie the game in the third and started the four-run rally that won the game with a triple in the seventh.

It was the age of colorful uniforms, as Billy Martin of the New York Yankees managed the American League, while Tommy Lasorda of the Los Angeles Dodgers was the skipper for the National League. Martin tabbed Jim Palmer of the Baltimore Orioles to start for the AL, while Vida Blue of the San Francisco Giants got the call for the NL.

The American League with six straight losses got off to a fast start as Rod Carew of the Minnesota Twins led off with a triple. Carew would come into score on a double by George Brett of the Kansas City Royals. After being pushed to third, on a groundout by Jim Rice of the Boston Red Sox, his teammate Carlton Fisk followed up with a sacrifice fly to make it 2-0. In the third inning, the American League used a similar formula to make it 3-0 as Carew tripled and scored on a sac fly from Brett. The National League answered in the bottom of the third as Larry Bowa of the Philadelphia Phillies led off with a single. After retiring the next two batters, Palmer faltered walking Joe Morgan and George Foster from the Cincinnati Reds. Palmer’s struggles continued as issued a third straight walk to Greg Luzinski of the Phillies to force in a run. The next batter Steve Garvey from the Dodgers made Palmer pay for his wildness, singling home two runs to tie the game 3-3. Matt Keough of the Oakland Athletics relieved Palmer to stop further damage.

Pitching ruled over the next few innings, as Larry Sorensen of the Milwaukee Brewers, pitched three scoreless innings, while Jim Kern of the Cleveland Indians and Ron Guidry of the Yankees handled the seventh. The National League meanwhile got strong pitching from Steve Rogers of the Montreal Expos and Rollie Fingers of the hometown San Diego Padres. After Bruce Sutter of the Chicago Cubs buzzed through the AL in the eighth. For the bottom of the inning, Martin called on Yankees Closer Goose Gossage to keep the game tied. However, he found trouble right away when Garvey led off with a triple.  He would come into score on a wild pitch to give the National League a 4-3 lead. Gossage meanwhile continued to implode walking Dave Concepcion. Dave Winfield of the Padres followed with a single. The two runners would advance into scoring position when left-fielder Chet Lemon of the Chicago White Sox booted the ball. Winfield and Concepcion would score on a single by Phillies Catcher Bob Boone to make the score 6-3. After moving to second on a groundout by Ron Cey of the Dodgers, Boone scored to make it 7-3 on a single by Dave Lopes of the Dodgers. Gossage would strikeout Jack Clark from the Giants, while Lopes was thrown out stealing. In the ninth Sutter retired the first two batters, before Phil Niekro of the Atlanta Braves came on to get the last out, getting Royals catcher Darrell Porter to pop up to third base.