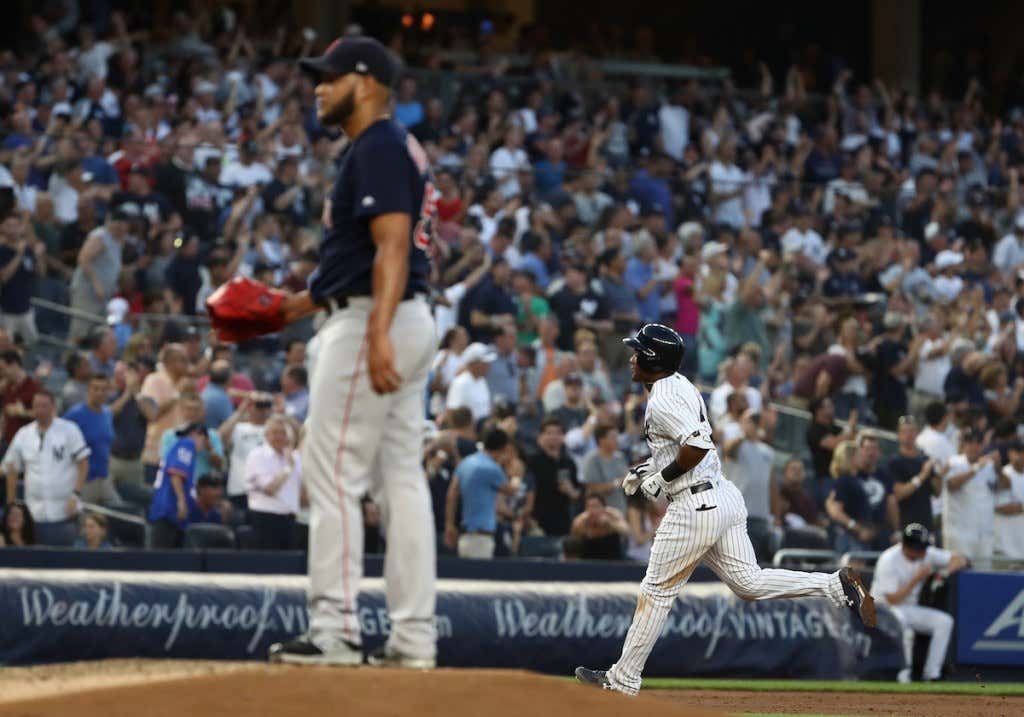 Credit to the Yankees for stepping on the gas and never letting up. There’s no such thing as running up the score when these two teams compete against each other. A 5-1 lead going into the sixth inning of a Red Sox-Yankees game is about as safe as the beachgoers at Amity Island. That was a Jaws reference. Credit to me.

Eduardo Rodriguez had been on one hell of a run, posting a 2.38 ERA over eight starts from May 10 through June 17, but his last time out, he got touched up for four earned runs in four innings against the Mariners. In a perfect world, that would’ve been a one-start hiccup, but uh. It wasn’t. Like, not at all. Rodriguez got torched for five earned runs on seven hits, walked a couple of guys and gave up a pair of homers to Miguel Andujar and Greg Bird. The game ended up looking way worse by the end of it, because Justin Haley, who’s got 45 seconds in the big leagues, came in and gave up two more homers to his former college teammate Aaron Judge and then Bird again.

A lot has been made out of the new Yankee Stadium being a joke because anything up in the air to right field is a home run, which is not unfair to say, but the Red Sox played in that same stadium last night. You can rag on how much of a launching pad that place is, but let’s not lose sight of the fact that the Red Sox had the same opportunity to put some balls over the fence in right last night, and they did not. Instead, they went 1-for-6 with runners in scoring position and left six men on base.

CC Sabathia was excellent, as he has been many times in the past against Boston. He wasn’t, however, in his last start against the Red Sox when he squared off against Rodriguez in the Bronx last month, giving up four runs in four innings before hitting the showers. It was a different CC on Friday night, though. The left-hander had been pitching really well over his previous five starts, and kept that momentum rolling against a Red Sox lineup that had just scored nine runs or more in four out of their last seven games.

Mookie Betts had a couple of hits, the newcomer Steve Pearce had a couple hits from the clouds, Andrew Benintendi drove in a run in the fifth inning, and Eduardo Nunez even had a hit. Other than that? 0-for’s across the board. It was such a buzzkill watching nine innings go by with essentially nothing happening in the batter’s box for Boston. That was just the fifth time in their last 62 games that the Red Sox have been held to one run or fewer.

I’ve got a feeling that that won’t be the case in the middle game tonight when Chris Sale opposes Sonny Gray. Since being acquired by the Red Sox prior to the 2017 season, Sale has made six starts against the Yankees and has a 2.48 ERA with 58 strikeouts in 40 innings. That’s a mark of 13.05 strikeouts per nine innings, folks. Pretty good. Sale also has a 1.29 ERA over his last four starts with a ridiculous 43 strikeouts in 28 innings. My God.

Sonny Gray is a bum. He’s got an ERA a tick under five on the whole year, he’s got a 5.40 ERA in his last three starts, he’s given up four earned runs or more in six of his 15 starts, and he’s got a 7.20 ERA in three starts against the Red Sox since joining the Yankees at last year’s trade deadline. He’s a bum. With such a mismatch on paper, the Red Sox have a golden opportunity to even up the series, as long as the bats cooperate, which is easier said than done when Sale’s on the mound.