Just getting into hour 2 with Willie Colon on the Barstool Breakfast radio show on Sirius Channel 85.  Maybe save this post for later (it’s kind of long), and tune in now.  Never met Willie before today, and trying to get a feel if he’ll invite me back.

As most of you know, I spent a week in Tennessee with my family, and I think I love the South.

I say this because I spent most of my life in NYC, and I have been very vocal with the fact I fucking HATE New York.

It’s not my first time in the South.  I lived in Atlanta for a year in the late 90’s, but had to get the fuck outta there because of the brutal July and August temps, and I worked for a shit-kicker I didn’t respect in the least… He was the kind of guy that was managing a firm, but would’ve been better suited refilling the drawn butter fountain at one of land-locked Tennessee’s many all-you-can-eat seafood buffets.

Which brings me to the food.  I gained 11 pounds in 6 days while in Tennessee, so the food agreed with me.  Eleven pounds may seem like a lot, but an elevator smells a lot different when you’re a midget… It’s all about perspective.  I take 6 pound dumps.

Either way, one of the reasons I am fatter is Gus’s Chicken.  I went to the original Gus’s in Memphis years ago, and apparently it has opened 25 other locations since then.  This time we went to the Knoxville outpost, right outside of the University of Tennessee, and maybe 15 minutes from Knoxville Airport. 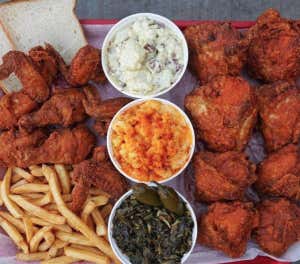 There were five of us, including the bride and my three kids.  Got there as soon as it opened.  Our waitress was a Southern belle named “Perceval”.  I called her “Percy” for short, and I am not sure she liked it, but she soldiered on regardless.  I ordered enough sweet tea, chicken, and sides for 10 people, and it wasn’t until after I was done ordering did Percy say, “I forgot to mention, but we have catfish today… Not on the menu.”

And I immediately said, “Oh, you son-of-a-bitch, I’ll take that too.”

I thought she hated “Percy”, but Perceval really hated being called “son-of-a-bitch”.

She said “Excuse me?!?”, and I explained that it was a term of endearment in this case.  The mere mention of fried catfish tugged at my emotions so quickly that I blurted out the first expletive I could think of.  I told her it was like a case of joyous Tourettes.

And before you say it, I know catfish is a filthy bottom feeder, but so are most of the customers I spent the past 25 years blowing for working equity orders.

Food came, and I tore into it like I had a tip on a famine.  I had to excuse myself towards the end of the meal because I was covered in grease. Went into the men’s room and looked in the mirror.  I had hot sauce on both shoulders… Which is tough to do when you’re an adult.

I came out, and sat back down at the table as the rest of my family then went to their respective bathrooms to wash up.

I sat there alone and began to package up the leftover thighs in the to-go bags the restaurant provided… Which were just generic brown-paper lunchbags with wax paper balled up on the bottom.

Percy came back one last time and as I asked for the check, she said to me, “I will get your check, but we just had some homemade pecan and chess pies* come out of the oven, almost too hot for the scoop of ice cream we put on top.”

To which I blurted out, “Oh, you filthy cocksucker, I’ll take a slice of each.”

This time she looked at me… And she smiled.

Another thing in the South that apparently I love is pimento cheese.  Went to some steakhouse and instead of a bread basket, they put a basket of warm biscuits on the table and a crock of pimento cheese on the side.  A regular bread basket is dangerous, but warm biscuits and pimento cheese is a fucking appetite killer.  I almost downgraded my ribeye to a side salad after my third biscuit, but kept with my original order out of respect for a restaurant that loves it’s patrons so much they hit them with a legit pimento biscuit app as soon as they sit down (“app” as in appetizer… Pimento cheese doesn’t have a iPhone app… Fucking millenials).

I will stay with food, and I know this isn’t limited to the South, but took the kids to a Krispy Kreme for the first time because I saw the light was on under the sign, which is fat-guy code for “the conveyor belt is on”.  And for those who don’t know, Krispy Kreme has a fully automated donut conveyor belt that uniformly pumps out hundreds of raw donuts into hot oil.  Then they go through an overpass that flips them.  Then they go through a waterfall of hot sweet glaze that reminded me of the Kardashian sisters in an NBA locker room.

I ordered 6 and the young African-American woman behind the counter said, “Half dozen will just make you mad, sugar… Get yourself a dozen.”

Apparently young African-American women down South get me.  So I did order the dozen… My kids had 2 a piece… My wife had 1… I had 5, almost on accident.

Moving away from food.  Here’s a casual observation.  I sometimes dance the edge of racism on the blog, just to be funny.  I have no hate in my heart and no rope in my trunk, but I like the laughs that inappropriate racism brings… Was a big fan of Archie Bunker growing up. 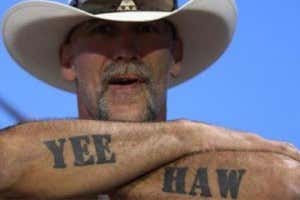 I am not condoning nor celebrating that.  Just giving you guys a heads up.

We had no wifi in the cabin I rented.  Did that on purpose.  Wanted to have the kids disconnect for a week.  I didn’t want to get to a point where my wife and I were enjoying the sun setting behind the Smoky Mountains, while my kids enjoyed Fortnite on their iPads.  After a couple days, they were scratching their arms like junkies looking for a fix, so I took them to a Starbucks so they could grab a signal long enough to download a couple movies.

Mainly because they don’t put a premium on the language rules that Starbucks wrote for its employees and customers.  I saw a guy come in and say to the barista, “I’ll have a large black coffee and an Egg McMuffin.”

And did she correct him and say, “Don’t you mean a Venti blonde roast and a bacon gouda crumpet?”

She got him his coffee and his sandwich, and sent him on his fucking way.

Which is probably easier than trying to teach these rednecks how to order Starbucks.  Some other poor bastard came in for a frozen drink, and I coulda swore he pronounced it “Moo-Lot-Oh”, which is dangerously close to an unacceptable term for a person of mixed race… Coincidentally, a word I got chided for using on Barstool Radio on more than one occasion… So I lol’ed when I heard this mouth breather say it with earnest, frozen coffee drinking intentions.

After 5 days down there I realized there wasn’t a single thing I missed from back North.  Even our pets became less and less of a priority.  We have one black goldfish named OJ Swimson (after the murderer) and a Welsh Terrier named O’Shea (after Ice Cube), and if either died while we were away it would take a considerable amount of responsibility off my wife and I… Especially since my prick kids do not feed the fish or walk the fucking dog.

There are, of course, some negatives about living in the south.

The overt racism I mentioned above is certainly one.

The brutal summer heat from that unrelenting sun is another.

And the general acceptance of family members marrying each other is probably the last. 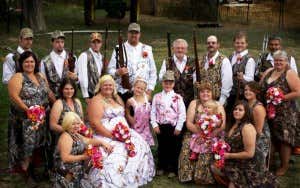 Reminds me of an old joke:

How does an Auburn fan find his sister after a football game?

I also went to a waterpark while I was down there with the family.  I say “with the family”, but I assume it’s implied by now that I am not the type of guy who goes to waterparks by himself.  Not sure if I can mention the name of the establishment, but it was maybe 20 miles away from where we were staying in the Smokies and it is owned by an old country western singer with REALLY big tits.

Will probably write about it in more detail once I can figure out how to post pics from my fucking phone, because there were some fucking doozies walking around.

And I am gonna post an Ass From The Past a little later on today, and you can be damn sure it’ll be a Southern broad (not Dolly).

* “chess pies” are like gooey pound cakes baked into pie crusts… They are fucking delicious.