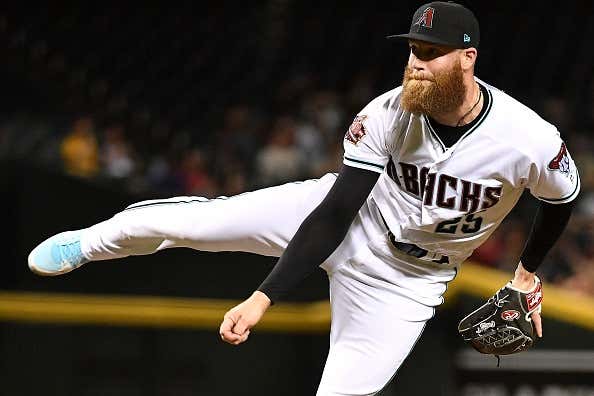 I was warming up to go in a game. I knew I had the next hitter. I knew he was on deck. The at-bat was kinda taking a little bit. As a bullpen guy in these big situations, I call ’em nervous pees, where like I don’t have to pee a lot, but I know I have to pee before I go in the game. I can’t believe I’m telling you this.

So it’s a 2-2 count, and I’m like, ‘Man, I have to pee. I have to go pee.’ So I run in our bathroom real quick, I’m ready to go. I’m trying to pee and I actually s— my pants. Like right before I’m about to go in the game, I pooped my pants. I’m like ‘Oh my gosh.’ I know I’m a pitch away from going in the game, so I’m scrambling to clean myself up. I get it cleaned up the best I can, button my pants up, and our bullpen coach Mike Fetters says, ‘Hey, you’re in the game.’ So I’m jogging into the game to pitch with poop in my pants essentially.

It was the most uncomfortable I’ve ever been on the mound. And I actually had a good inning. I had a clean inning, and I walked in the dugout and I was like, ‘Guys, I just s— myself.’ They didn’t believe me, then the bullpen came in and they’re like ‘Oh my God, you had to see this.’

You know, courage comes in many forms. There is facing danger. There is channeling your Fight or Flight instinct to overcome your fears. There is performing when you are needed most. And then there is getting the job done when facing the stark raving terror that can only come from having a fresh dump in your pants. And to me, Archie Bradley demonstrated all of them that day. Then doubled down on his bravery by showing the sheer will to talk about it in public.

It can’t have been easy. But in doing so, he’s an inspiration to people everywhere who need to be at their best with a Sewer Trout in their underwear. He essentially has pulled a Finless Brown Fish version of a Billy Madison:

I’ve often asked myself how this doesn’t happen more often. Especially in baseball, where guys are out there in the field every half inning for sometimes four hours with four or five at bats in between. With no halftime. No between the periods where you can run to the clubhouse. Times 30 MLB teams and 162 games. You’d assume it happens all the time, but Archie Bradley’s case is so rare as to be blog worthy. And the only answer I can come up with is a thing comics call “Performer’s Health.” I can’t tell you how many times I felt like I had to drop a giant deuce before a show and wondered if I was going to make it, only to get on stage and feel perfectly fine. Do 30+ minutes of stand up, come off stage and not have to go at all. It’s just some kind of thing your brain does where it overrides what your digestive system is telling it. Because it doesn’t want to live the rest of its life with the reputation as The Brain of the Comic Who Shit Himself. Mind over matter.

In this case, Bradley’s ass got the final say. But in no way is that a brown mark upon him. On the contrary. I want that guy in my bullpen. I need that guy in my bullpen. The guy who’ll take to the mound and put that ball in his hand, the fact he’s got a rosebud in his trousers be damned. And – his words – pitch a clean inning. By God, you have to admire that kind of bravery.

Finally, I’d be derelict in my duty if I wrote this without including the longtime Barstool favorite “George Brett Poops His Pants” video, the greatest baseball story ever told.