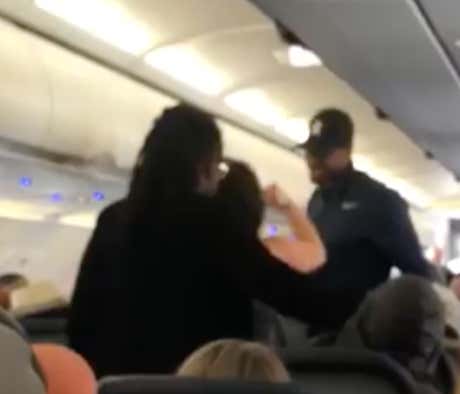 LOTS to unpack in this story. Wait til you see the video. But first, the story because it’s so god damn Spirit Airlines.

NY Post - A woman was caught on video going ballistic aboard a Spirit Airlines plane that made an emergency landing because of a medical emergency — leaving other passengers and at least one flight attendant in tears, according to reports.

The Houston-to-Minneapolis flight was forced to divert to Rochester, Minn., when a man required medical help about an hour into the trip.

“The attendant thought that he was just sleeping but he was actually in a coma,” passenger Stephanie Calder told KHOU.

Ok, let’s hold it here. Two crazy things happening in 3 short sentences. Passengers and flight attendants were in tears, AND a dude on the plane is in a coma. But the former has nothing to do with the latter. Oh Spirit Airlines, how are we so blessed to have you?

In the video taken by passenger Chianti Washington and posted to Facebook, fellow fliers are seen praying and consoling each other during the woman’s meltdown.

“She was yelling at the two gentlemen that were trying to block her — it was very scary,” Washington told ABC News. “She would just not stop, and as police escorted her off the aircraft continued to remain belligerent.”

She added: “All I could think about was the children on the aircraft — I said a prayer. You just didn’t know what she was going to do. We were very much scared and shaken by her behavior.”

Washington told click2houston.com that at least one flight attendant was in tears after the incident and that other crew members handed out tissues to passengers who were crying.

Again, there is a dude in a freaking coma on this plane, and the focus of attention to everyone on the plane is this woman losing her mind. Nobody is scared because someone basically just went brain-dead on the plane, people are weeping because some woman is throwing a temper tantrum. Nobody cares at all about the coma guy whatsoever. It’s Lord of the Flies out there.

An hour after the frightening incident, Flight 346 took off for Minneapolis. “We apologize to our Guests who had to witness this and for the inconvenience of the delay. Safety is our top priority at Spirit Airlines.”

Ok so at this point I need to change the blog real quick. We see plane freak outs here and there and usually they are good fun. This video is going viral, but according to the article, the woman was in the military and might have PTSD. Unconfirmed, but it’s in the article. So that makes it significantly less funny, like from a 7 to a 0. I wrote this blog because I originally saw the story that a dude with a coma was on a flight where a woman had a tantrum, and that’s what stuck out at me, that nobody cared at all about coma guy. So here’s the video, that’s going viral:

Hopefully the man in the coma, and this woman, are both ok. I have to say though, the shaking of the fist in the guy’s face is an all time power move.