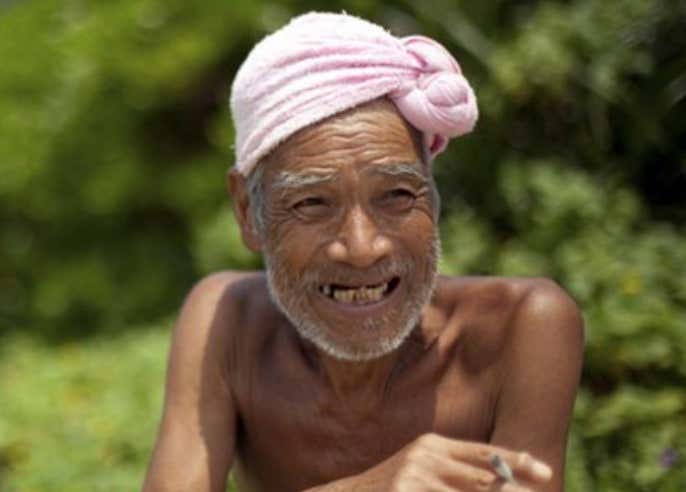 Source-  For almost 30 years, Masafumi Nagasaki has been living in near-total isolation.  Now 82 years of age, Nagasaki has been removed from his home after becoming the longest lasting voluntary castaway alive. For decades, he was the sole inhabitant of Sotobanari island in Japan’s tropical Okinawa prefecture.

Alvaro Cerezo, who travels the world documenting isolationists like Nagasaki, reported his eviction on his site Docastaway. “He was kicked out of the island, someone saw him on the island and it seems like he was weak,” Cerezo told news.com.au. “They called the police and they took him back to civilisation and that’s it. He couldn’t even fight back because he was weak. They won’t allow him to return.”

“I don’t do what society tells me, but I do follow the rules of the natural world. You can’t beat nature so you just have to obey it completely,” he said.  Nagasaki had hoped to die on the island, he told Reuters in 2012: “Finding a place to die is an important thing to do, and I’ve decided here is the place for me.”

Unfortunately, the 82-year-old’s condition means his days of island life are at an end. “Sadly, last month the Japanese authorities forced Nagasaki to go to a hospital with no hope of returning to his island,” Cerezo wrote in his blog. “His dream days in the paradise are over.”

This is the dream. I can’t tell you how many times I’ve been on the subway or walking down a city street and thought about dropping off the grid completely. No more crowds, no more internet, no more trolls, no more haters, no nothing. Just me and mother nature. I don’t think I’d even tell anyone, I’d just disappear…Only to be rediscovered days later, hungry and delusional mere miles from my point of origin. It took me a while to admit that to myself but it’s true. I couldn’t last in the wild. I’ve watched enough NatGeo to know what I have to do, I just couldn’t execute it. My shelter would be half-assed, I’d feel bad about hunting, it would be a disaster. Realistically I could do a week before I’d have to go back to society. To think that this old man was able to do TWENTY-NINE years blows my mind.

Shame on the Japanese Government for taking him back to society. Clearly he didn’t want to be bothered. He was happy. They should’ve let him die on the island; his words not mine.

Nagasaki had hoped to die on the island, he told Reuters in 2012: “Finding a place to die is an important thing to do, and I’ve decided here is the place for me.”

I didn’t even know you could force someone into the hospital. I knew they did it for Steve-O but that’s because he was high on nitrous, Masafumi seems completely lucid. The only thing wrong with him is the fact that he’s weak. #Same. I wouldn’t be surprised if he died the second they brought him back to the hospital. Harakiri style. Birds like Masafumi aren’t meant to be caged.

The worst part of this story is that it ruined survival shows for me. Naked & Afraid, Survivor, The Last Alaskans, Life Below Zero; they all seem fake now. If only he had been discovered twenty years earlier he could’ve had his own show. Oh well. Good luck readjusting to society, Masafumi.