You know what? I believe this crazy son of a bitch. I don’t know why, but I just do. Perhaps it’s because he could probably kill me if he wanted to, but with Vlade and Peja leading the way for the Kings? Super team, baby.

Even if they don’t turn out to be a super team, which is just crazy to think they won’t, Vlade gave himself an out by saying they are just young. That’s how you GM, folks. Put a bunch of pressure on but don’t live up to these expectations because it’s a young team and ready to compete in a few years. They are just waiting the Warriors to get older, that’s all. 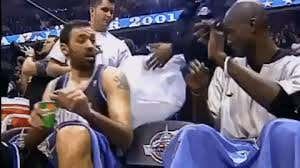