PLYMOUTH MEETING, Pa. (WPVI) — Kathy McVay of Plymouth Meeting learned the hard way that a hot dog can hurt. “It just came out of nowhere. And hard,” she said. On Monday night, McVay was at the Phillies-Cardinals game at Citizens Bank Park. She was seated behind home plate when the Phanatic rolled out onto the field with his hot dog launcher. The big green mascot started firing away into the stands. The Phanatic shoots real hot dogs, but they are wrapped in duct tape.

Head on a swivel, Kathy. I’m sorry, but the Phanatic going mad with his hot dog gun and almost committing manslaughter on an old lady is funny. I know it’s funny. Action News knows it’s funny. Hell, even Kathy admits it’s funny, which of course is the only reason we’re allowed to think it’s comical.

Getting a black eye via a wiener shot out of a cannon isn’t ideal, but it could’ve been worse. The Phanatic wields his long distance weaponry like a goddamn madman every single game. The “Hot Dog Cannon” may sound like a toy, but it’s a legitimately piece of artillery. I mean, look at this thing: 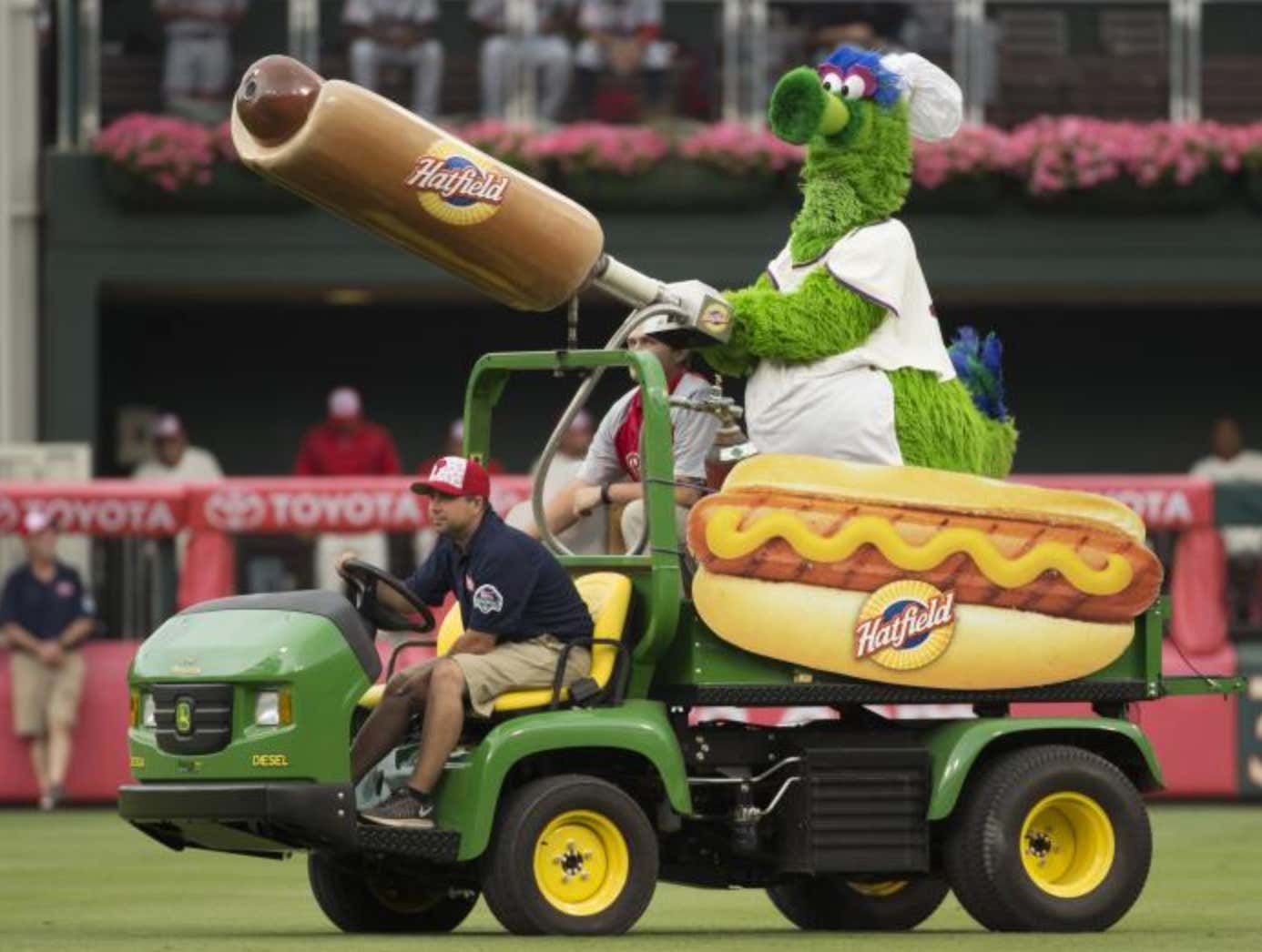 The Phanatic is like 11 ft tall and fits comfortably on the war machine. The damn thing’s the size of a howitzer (the battle, not babydick kind). And he takes no prisoners. Here is the green maniac with his “Toy” committing first degree murder a pig a few years back:

BAM! Right in the hams. It takes a couple of takes to actually get a visual of the wiener being shot out faster than a speeding bullet, so we see how it can do some damage. Good on Kathy for laughing it off in stride. Plus the Phillies won in extras on Monday. I’ll take a wiener to the face at mach speed every game for a W. You do what you gotta do to support the team.

Oh, and the Phillies won their 3rd straight series today beating St. Louis, 4-3. Odubel Herrera is on a TEAR as he’s the first Phillies centerfielder ever to homer in 4 straight games (5 of 6, too). Take THAT – Doug Glanville, Endy Chavez, and Ben Revere. Ring the damn bell.