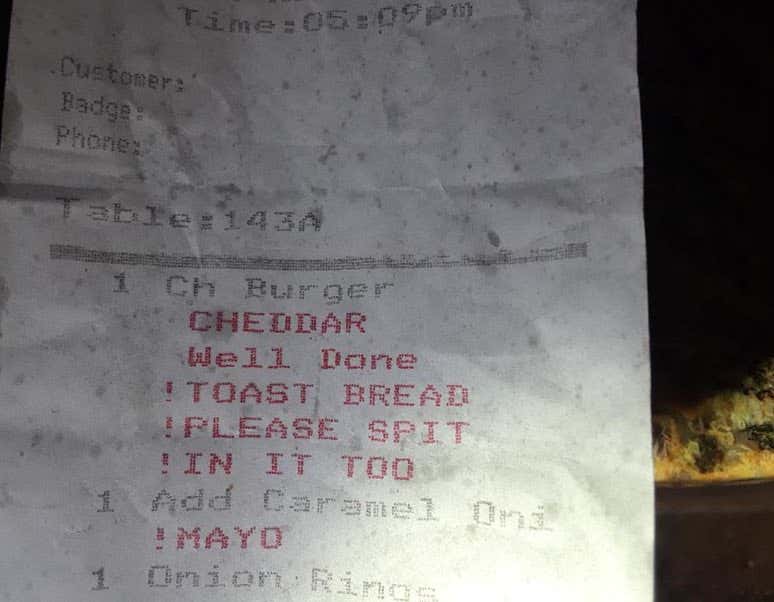 ABC- On a scorching hot summer night, what is better than a cold brew? Pair it with a juicy burger – cheddar cheese, well done – and toast the bread. And please spit in it, too! Don’t forget the mayo! Wait…spit in it?

In an exclusive interview with Eyewitness News, Curtis Mays says it all started because his order got mixed up. “I ate my burger already, I felt like I was gonna throw up,” he said. He asked his waitress for his receipt, and that is when he noticed that ‘extra’ ingredient. “I asked her ‘why would you do this?’ And she couldn’t explain it. She said she didn’t do it, so I as like ‘who prints out the receipt?’ So she said ‘I take it up there and print it myself.'” Mays said, “So you did it? Why are you lying about it? She just walked off.”

The Sea Cliff man says he was being treated to a Father’s Day dinner by his daughter and granddaughter at the Bohemian Hall and Beer Garden in Astoria when it happened. He says the evening started off pleasant. “She was very nice – she comes up to the table, ‘hi, how are you doing?'” said Mays. Mays said the manager fired the waitress immediately, and he got a refund, of course. “He was saying, ‘how can we compensate you?’ I was like, ‘how can you compensate somebody for spitting on your food? I ate this already,” adds Mays.

Call me crazy, but I actually respect the waitress a little bit for this savage move. Don’t get me wrong, if you spit in or tell somebody to spit in someone else’s food, you are an asshole. Plain and simple. But the waitress mindfucking this guy and saying “I hope your burger tasted good, I put a little something extra in there for you” with a wink as he was eating the burger and caused him to go full Farva trying to figure out if he had just eaten spit or worse would have been significantly more vicious.

Plus lets be honest, seeing the polite request of Please Spit In It Too is laugh out loud funny. Again, seeing some random chef’s spit as part of your burger order is a goddamn nightmare. But you also have to hear both sides here. I have a hard time believing this waitress put her job at risk with a literal paper trail to the unemployment line for no reason. She didn’t have to put that order of spit on a receipt. I imagine waitresses and chefs have a system where a simple look, nod, or code word means give this customer the special sauce. Each code word can mean a different sauce if you want to get gross. But the bottom line is if you act like a dickhead to your waitress or send food back for pretty much any reason, your ass is officially in the jackpot and the cleanliness of the food you eat is officially at the mercy of the service industry that has to deal with wayyyyy too many assholes for not enough money on a daily basis. I’m not saying it’s fair or not. I’m just saying that’s the way it is. To know what type of bodily fluid you just ate is almost a mercy killing when it comes down to it.

P.S. This quote from the manager was downright hilarious.

The manager added that is very unlikely a cook actually spat in the burger, but he understands why the customer is upset.

Look, I hope that guy didn’t eat spit and I love the Astoria Beer Garden for the countless hours of debauchery I spent there back during my five years as an Astoria resident before I traded a life of happiness and married bliss for a life of sleepless nights and kids. But that sorry son of a bitch definitely ate some random chef’s spit if it said it on the receipt. That’s as black and white of a Spit or No Spit case as it gets.