So I actually meant to blog this last week when Lil Wayne won his lawsuit against Cash Money. It’s one of my favorite YouTube videos ever. It happened fairly recently. The date on the video says February 2017 so a little less than a year and a half ago. It’s an incredible video that really has no reason to be as incredible as it is. On its face, it’s a musical act performing on a popular daytime talk show. We’ve seen that a million times. But it turned out to be much more than that.

I love this video for a few reasons. Let’s take each of the reasons and break them down individually. I sure hope you’ll join me on this journey.

The first thing is how LOL funny Lil Wayne looks standing next to 2 Chainz. Everybody is thinking it and I wanna get the elephant in the room outta the way up top. 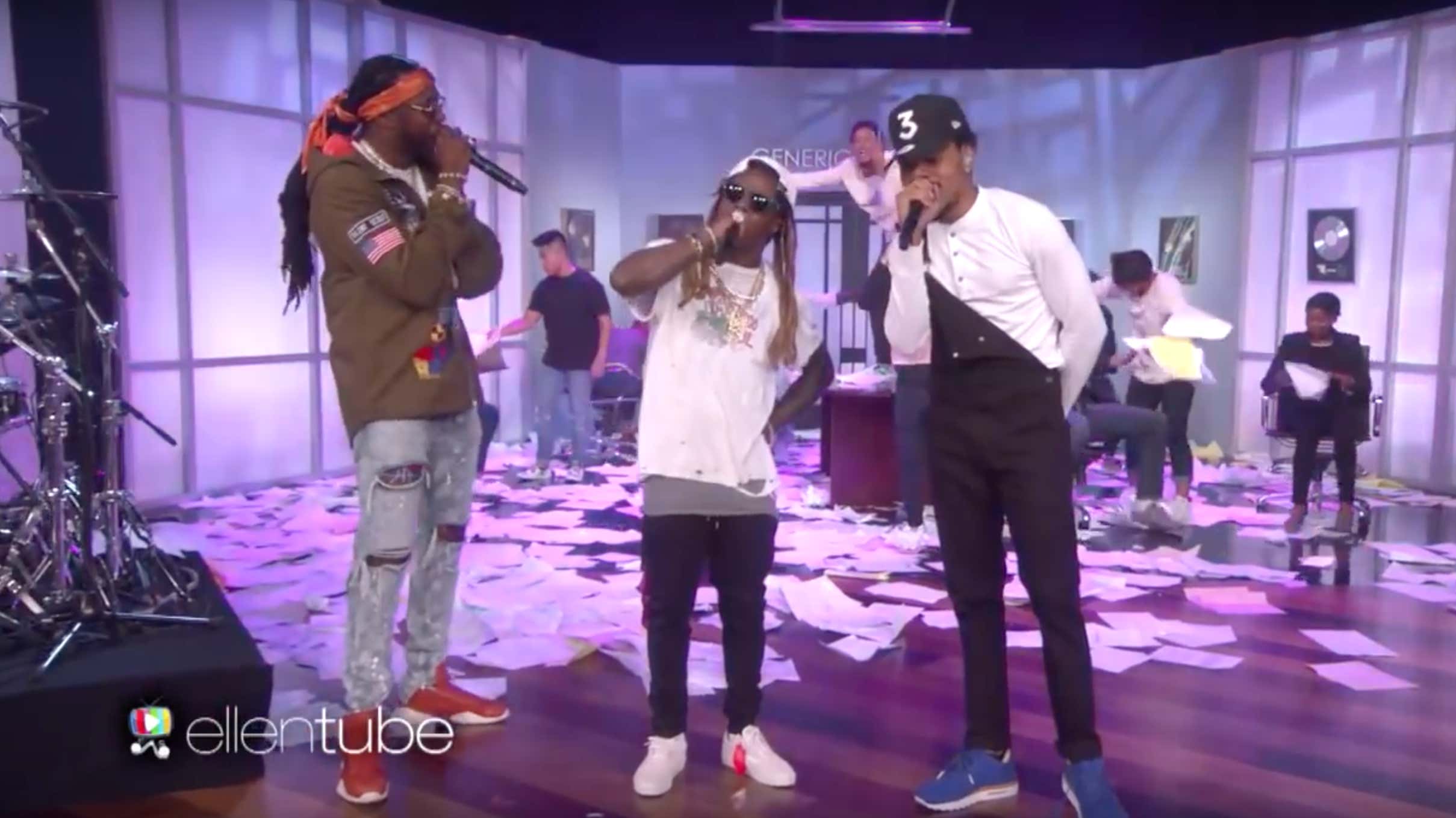 That’s hilarious. A person on Twitter said 2 Chainz looks like a damn building and they’re right. Weezy is already a small guy (5-foot-5) but it doesn’t help to stand next to a 6-foot-5 Tity Boi. The great part about Lil Wayne is that his size does not matter in the slightest. He’s one of the great wordsmiths of our time. His talent and persona make him larger than life. Remember at the beginning of ‘Mr. Carter’ when he’s talking about how he feels colossal? Well he feels that way cause he’s a mother fucking giant when he stands in front of a microphone. It doesn’t matter that 2 Chainz could pick him up and put him in his pocket. It’s funny though.

The next thing I wanna talk about is Lil Wayne talking about taking percocets. That might not seem like a big deal if you’re even the least bit familiar with Lil Wayne. He has, by all accounts from himself to the people who know him to the medical staffs who have worked on his seizuring body, done all the drugs in the world. Then done them again and again against the advice of everyone. So it’s nothing new. The thing about him rapping about taking percocets (5 of them, only a buzz) in this particular instance is that he rapped about it ON THE ELLEN SHOW.

You’re familiar with Ellen DeGeneres, yes? Me too and we all have a general feel for what her audience is like. Lotta middle-aged housewives and, not only does Lil Wayne rap about taking 5 percocets and barely catching a buzz on a show those people are watching, he takes a big ol’ step forward before he does it.

This is where he’s standing before he says it 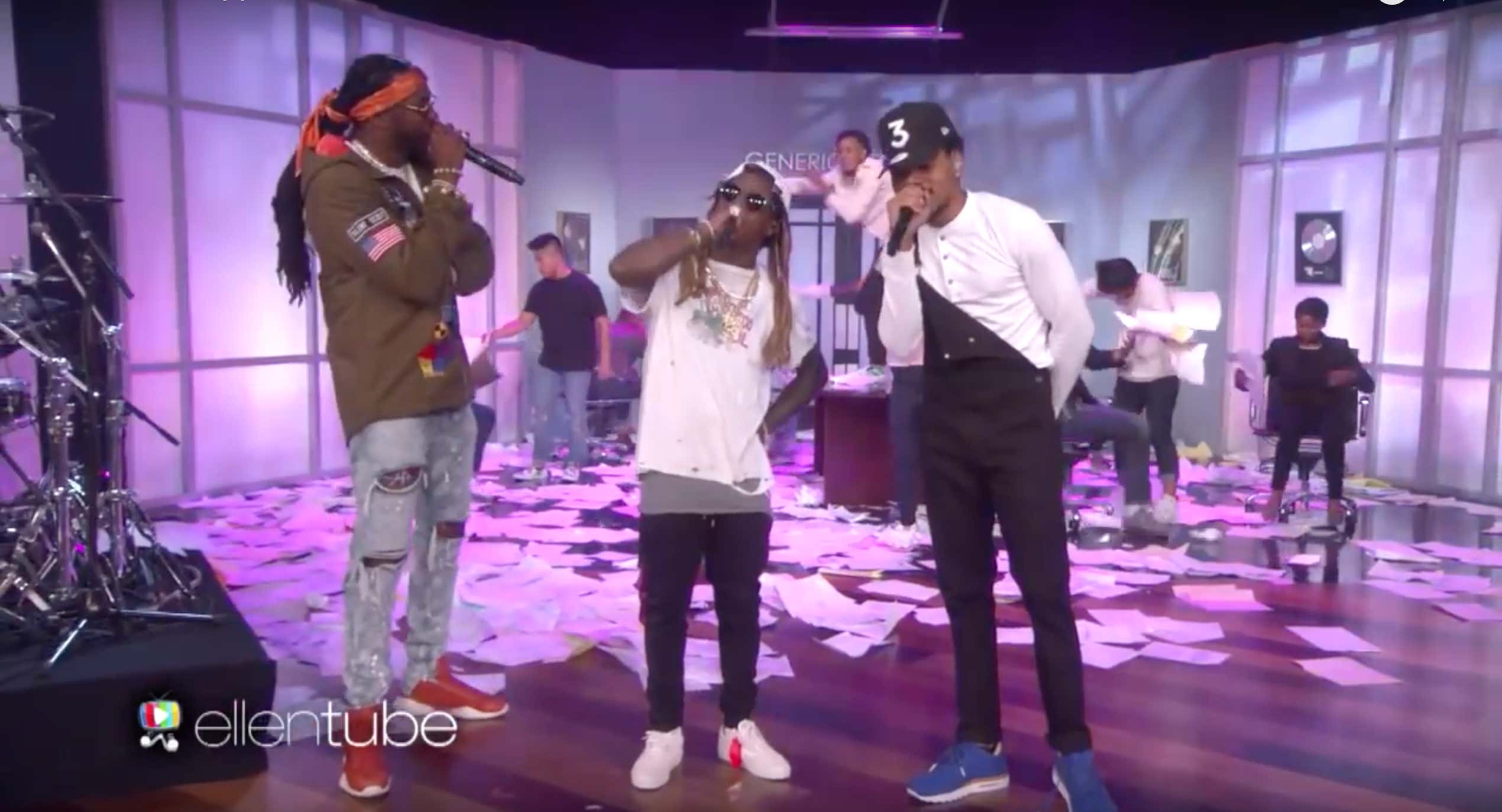 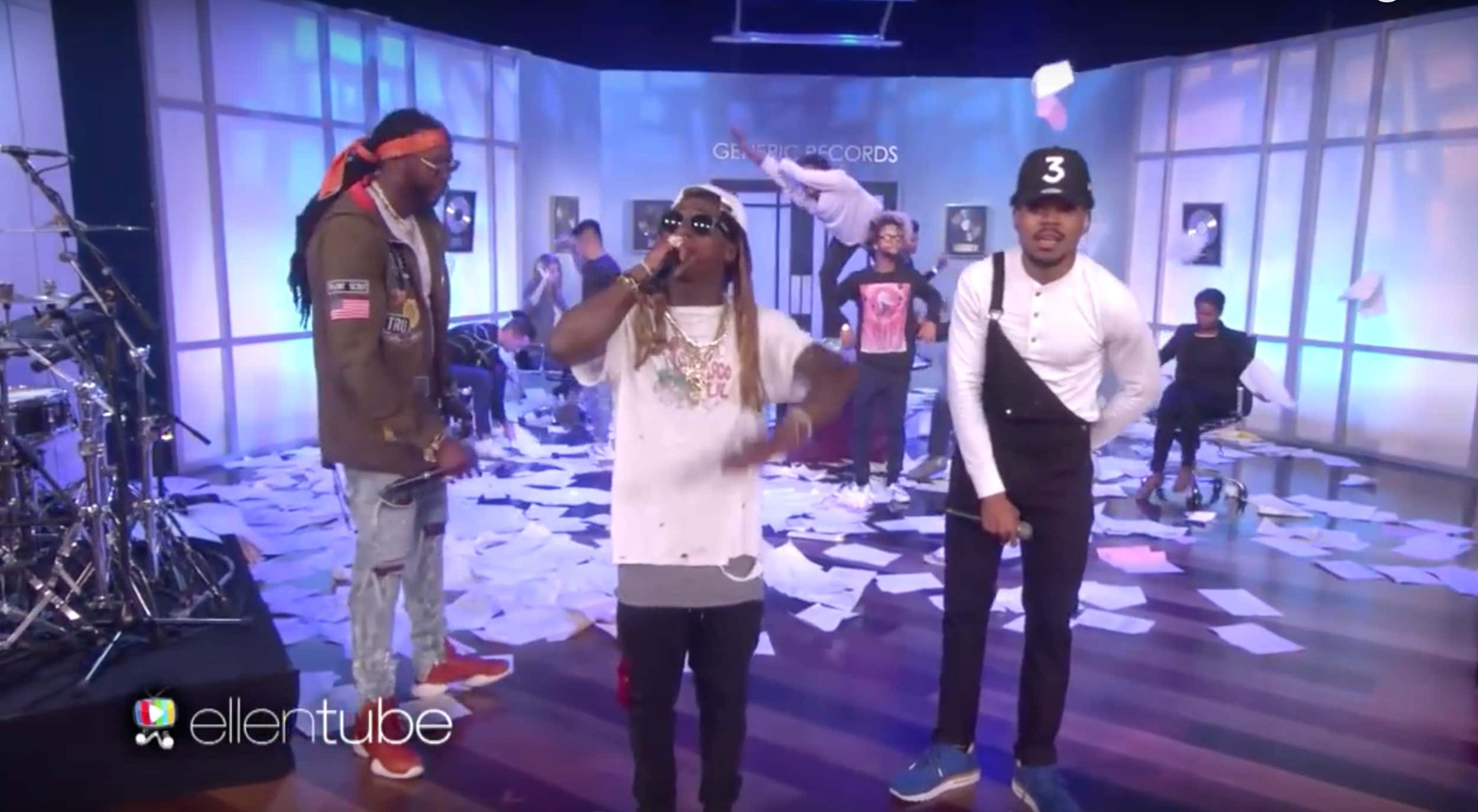 It’s really one of the cockiest things I’ve seen in a long time. He’s basically like, “Alright I’m on Ellen and I’m about to talk about how many percocets I take. Fuck it. Might as well step up and let these middle-aged women know how I roll.” He steps right into their living rooms. And holds up his hand. To make sure they really heard him I guess? 1-2-3-4-5 percocets! It’s a spectacular display of showmanship and don’tgiveafuckery.

Listen back and you hear 2  Chainz let out a loud, “LAWD!” Am I gonna look back on these words one day when Dwayne Carter dies from drug use and feel bad? Yeah probably. It doesn’t make the moment any less cool to me. We’re gonna get to the Ryan Lochte/Chance moment next but this is by far my favorite part of the video.

Move on, put my goons, they kid nap newborns

In the streets my face a coupon

Her pussy too warm

I just love the idea of Lil Wayne saying absurd things on a show where the viewers aren’t used to it. Like Ellen had probably just handed a soup kitchen a check for 2 millions dollars and Wayne is like, “FYI I’ll tell my people to kidnap your newborn baby.”

Now let’s move on to the end where Lil Wayne changes up the lyrics to take shots at Cash Money and blows everyone’s mind.

And if that label try to stop me

He changed the lyrics to

And if Cash Money try to stop

It was a topical reference at the time cause and A) Lil Wayne’s relationship with Cash Money and Birdman was souring to the point where it was going to court and B) Ryan Lochte had just been robbed at the Rio Olympics.

Here’s a little refresher on what happened with Lochte

On the morning of August 14, 2016, Lochte and Jimmy Feigen said that they and teammates Gunnar Bentz and Jack Conger were robbed in Rio de Janeiro, Brazil, during the 2016 Summer Olympics after men forced them out of their taxi at gunpoint in the early morning hours. After surveillance video and a police report emerged that confirmed a security guard had brandished a gun after one or more of the athletes vandalized the gas station bathroom, Lochte stated in an interview that he had been drunk and that he “over-exaggerated that story”. However his amended story raised concerns about the facts, and soon it emerged that Lochte’s taxi had not in fact been stopped by armed men, but that the swimmers had stopped to use the fuel station’s bathroom which Lochte was accused of vandalizing. 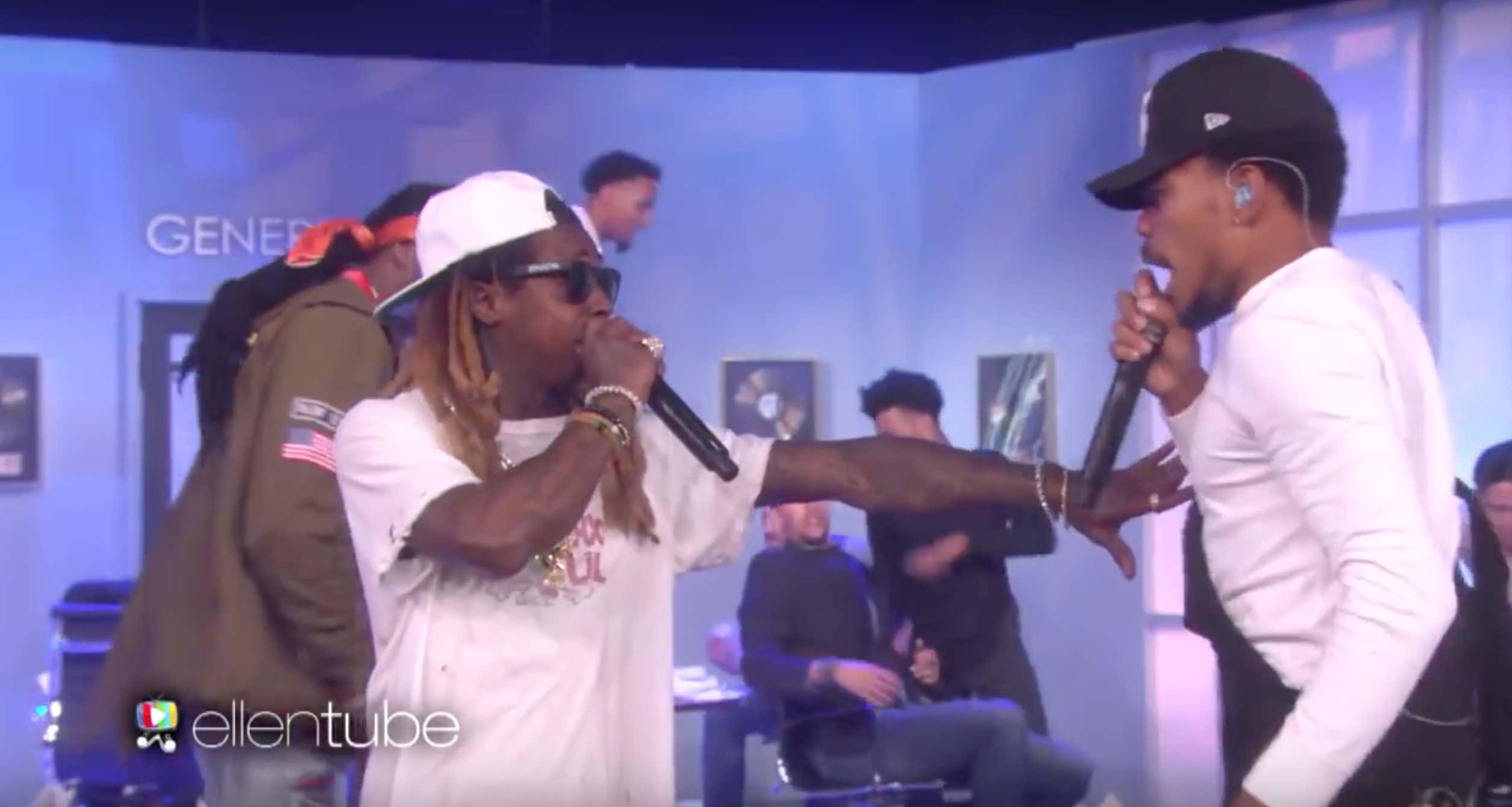 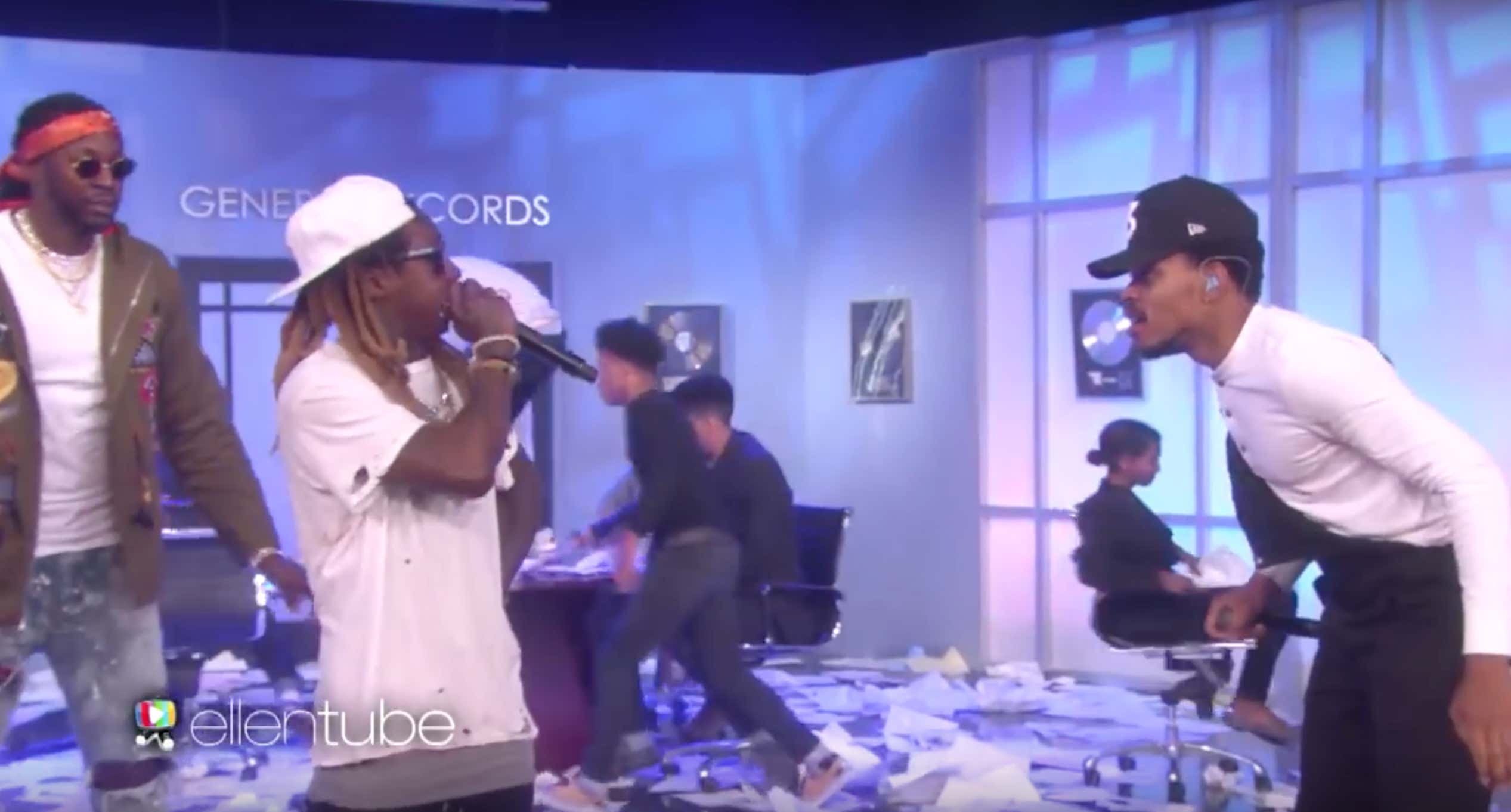 And then Weezy F Baby proceeds to explode Chance’s brains all over Ellen’s studio. Chance legitimately loses his mind. He freaks out and dances around like a maniac. That’s a guy who realizes he just had a front row seat to watching a master at work. That takes serious balls from Lil Wayne. I’m sure he didn’t think much of it cause he’s Lil fucking Wayne but to change up a lyric without telling anyone on TV is ballsy. That could go sideways in a hurry. Or he could mess up the line. He didn’t. He knocked it out of the park cause, again, he’s Lil fucking Wayne.

This is entire blog is to say that Lil Wayne is a legend and should forever be regarded as such. A true American icon.