Thursday, June 12th 2008. A day that I will stick with me for the rest of my natural born life. Who am I kidding, I’ll also remember it long after I’m dead as well. I remember that day well, what a roller coaster ride of emotion it was to watch our beloved Celtics try and respond from a disappointing 87-81 loss in Game 3 of the NBA Finals. After taking the first two at the Garden the Celts looked as if they were going to roll through the series. They were riding a 4 game winning streak into LA, and everything sort of changed with that Game 3 (Kobe had 18 FTA by the way, BOS had 22. Fucking Stern) loss and when the Celtics came out in Game 4 and immediately got down 20-6 things looked pretty terrible. It wasn’t even really Kobe either, he didn’t make a shot in the first quarter, mostly it was Lamar Odom, and after the first 12 minutes the Lakers had a 35-14 lead. Once again the Lakers had 15 FTA in the first 12 minutes. Some might say there was a good amount of home cooking in the two games at the Staples Center. I wouldn’t, but some people might.

Things got really out of hand when fucking Sasha Vujacic was celebrating and pounding his chest. 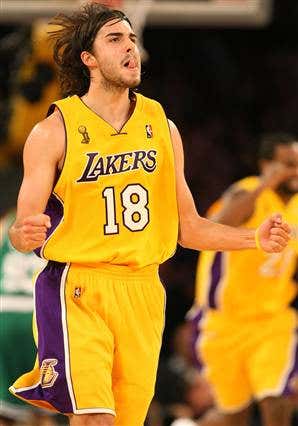 At the break, the Celts managed to bring the lead down to 18 points. Things didn’t really change about midway through the third quarter with the Celtics still down 20, but then it happened. The switch was flipped, and NBA history was on the horizon.

Here came the Celtics defense we all knew and loved. The one that ran the league. All of the sudden they pulled out a 20-3 run in that third quarter and we had ourselves a one possession game with a potential 3-1 Finals lead a real possibility. We all remember what happened next, Ray Allen put that cocky sonofabitch Vujacic in a blender for the game sealing layup, and just like that the comeback was complete.

The Celtics as we know, went on to close the series out in Game 6 at home which to this day remains one of the best days of my life.

Looking back closer after all these years, it’s still pretty wild. Did you know that Ray Allen had a 143 Ortg in this game? Or that James Posey had one of 153? Years later we talk about Paul and Ray and how good they were down the stretch, but make no mistake, they Celtics don’t win this game without the huge 29 points from Posey (18 points on 5-10 shooting, 4-8 from deep) and the 11 from my man Eddie House (11 points 4-9 shooting, 2-4 from deep, team best +20). These points were huge because Rondo was relatively quiet in this game, and Pierce and Garnett could not stop turning the ball over (they had 8 of the team’s 11). At the end of the day the difference simply was in the two benches. The Lakers got a combined 15 points from their reserves, while the Celtics had double that. You don’t pull off a comeback like this without defending first, and the Lakers scored just 33 points over the final 22 minutes.

Poor Kobe ended the night going just 6-19 from the field and had a second worst -9 in his 43 minutes. Nothing like making his 36 point Game 3 completely worthless, and doing it on his own floor was the cherry on top. Not only did he choke, but he also couldn’t inspire any of his teammates to show up after their first initial run. I for one am still waiting on the Detail episode about this. Something tells me we won’t be getting it.

Anyways, hopefully you enjoyed this trip down memory lane. I know I sure am erect. See everyone on the same day next year so we can relive it all again.