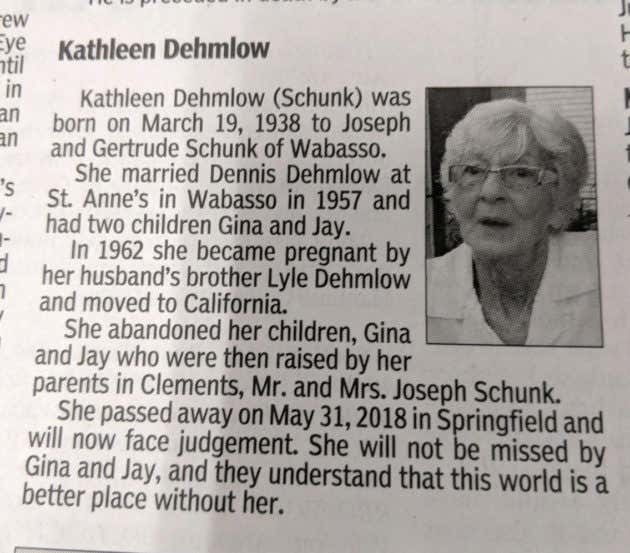 MPR News-Kathleen Dehmlow (Schunk) was born on March 19, 1938 to Joseph and Gertrude Schunk of Wabasso. She married Dennis Dehmlow at St. Anne’s in Wabasso in 1957 and had two children Gina and Jay.
In 1962 she became pregnant by her husband’s brother Lyle Dehmlow and moved to California. She abandoned her children, Gina and Jay who were then raised by her parents in Clements, Mr. and Mrs. Joseph Schunk.
She passed away on May 31, 2018 in Springfield and will now face judgement. She will not be missed by Gina and Jay, and they understand that this world is a better place without her.

Today I learned that you do NOT fuck with Gina and Jay Schunk. They are two badass mamma jammas that go hard in the paint and somehow killed their biological mom in her own obituary. And it wasn’t done with any real spinzones either. They simply by recited her choices in life yet still had the reader feel like they were watching this scene unfold in person.

If that obituary doesn’t inspire you to shape up as a parent, nothing will. Every time my infant son screams in my face for an hour straight or my 3 year old daughter gets sick and ruins yet another holiday, I imagine a world where I go for a walk to buy my first pack of cigarettes and never return home. That’s not uncommon for parents. You almost always snap out of it however because those little SOBs do jussssssssssst enough to make you love them more than literally anything else in the world. However, I will now also remember that my kids will have the power to remind the world of any fucked up thing I have done in my life and cause my dead ass to go superviral.

Then again, Kathleen Dehmlow doesn’t strike me as the sentimental type. You don’t cheat on your husband with his brother, get pregnant, and then abandon your first set of kids unless you are cold-blooded and/or the baddest bitch on a soap opera. I’m sure Kathleen is handling everything just fine, no matter how hot it may be wherever she is.