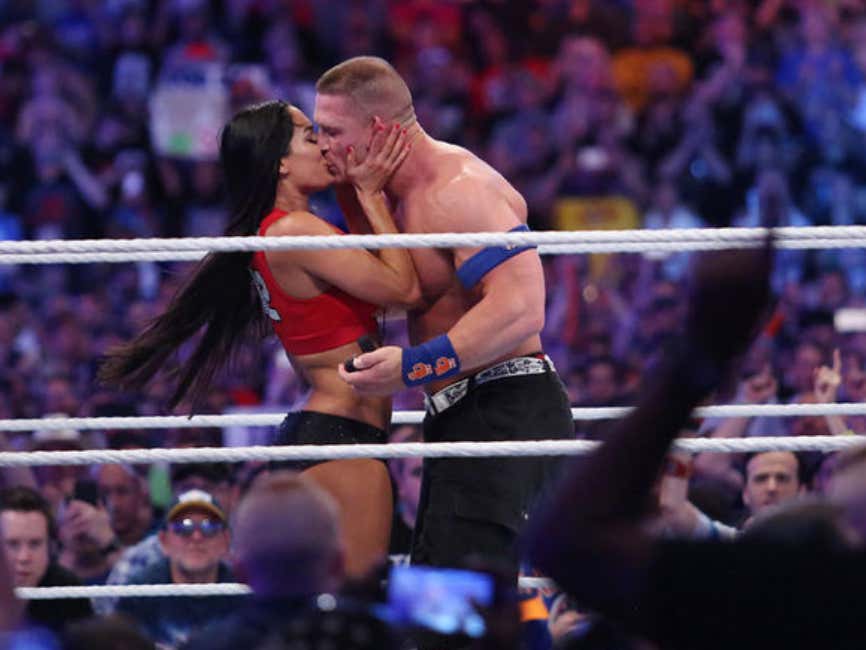 UsWeekly- Distance makes the heart grow fonder! Just a month and a half after calling off their engagement, Nikki Bella and John Cena are back together, Us Weekly can exclusively reveal. The break was good for the pair, a source tells us, for Bella especially.

“Nikki called off the wedding earlier this month so she could have more time to make a decision with what she wanted in life,” an insider close to the pair tells Us. “Calling off the wedding was the right decision at the moment and their relationship only grew from it. It didn’t mean that any love was lost, or that they lost any feelings for one another, but they both have realized that they love each other and want to be with one another.”

I’m going to address the elephant in the room right off the bat. Yes, this all now smells of a big ol’ work. A “work”, if you’re unaware, is a wrestling term that means something is part of the on-screen storyline. So, “Stone Cold” Steve Austin hating The Rock, or Vince McMahon, was a work. CM Punk’s “pipebomb” promo, was a work. If someone goes off-script, or goes rogue, however, then we’ve got a “shoot” on our hands. These are obviously much more rare in the business, although they do happen from time to time, a famous example being Kurt Angle vs Daniel Puder on SmackDown…

So the big question as far as this breakup has been concerned was, is it a shoot, or is it a work? John Cena and Nikki Bella had an off-screen romance for a while that developed into an on-screen romance, both on Total Divas/Bellas and on WWE television, so the waters were muddy to begin with. Could this have all been a storyline for the next season of Total Bellas? Things would seemingly lead to a “yes” there now that they’re back together (and so quickly, at that), but I’m honestly not sure.

When John Cena was in the office last month, just days before the Nikki Bella breakup news hit the tabloids, he was NOT in the best mood. You may have noticed a few of the guys chatted him for a bit and got pictures and whatnot with him…

…but I did not. Now why would someone who considers John Cena to be one of his top five favorite wrestlers of all time not get a picture with him? Because I left before I had the opportunity to…on purpose. He was just in such a bad mood that I had a “Don’t meet your heroes” moment and left. I was like, “Ah, fuck, I don’t want this guy to be an asshole to me and change the way I think about him. He’s probably just having a bad day.” A few days later, after I’d talked to some friends at the WWE who said the attitude I described was extremely uncharacteristic of Cena and the breakup news came out, my decision was completely validated and I felt a bit better about my guy Super Cena. I’m telling you all of this to say that if this breakup was a work, John Cena is the greatest method actor of all time and went to absolutely preposterous lengths to keep kayfabe alive. I mean, the man unmistakably looked like a disheveled middle-aged man just weeks after the breakup:

He also poured his heart out on national television ala Johnny Drama and uttered the saddest, funniest, and most pathetic sentence I’ve ever heard…

“…and everyday from 6 to 9 I get out of the house and talk to strangers.”

There’s no way a man kayfabing a breakup would ever admit to steeping to such low levels publicly like that, so in conclusion, yes, John Cena and Nikki Bella broke up…but no, it wasn’t a work, and yes, they’re back together because true love prevails. Only thing that woulda made this better is if they saved getting back together with each other for next year’s WrestleMania and pulled a Macho Man/Miss Elizabeth at WrestleMania VII.

Gets me every time.

Congrats to John and Nikki. I’ll see you all at their wedding, which I assume will be bigger and better than the Royal Wedding in each and every way.