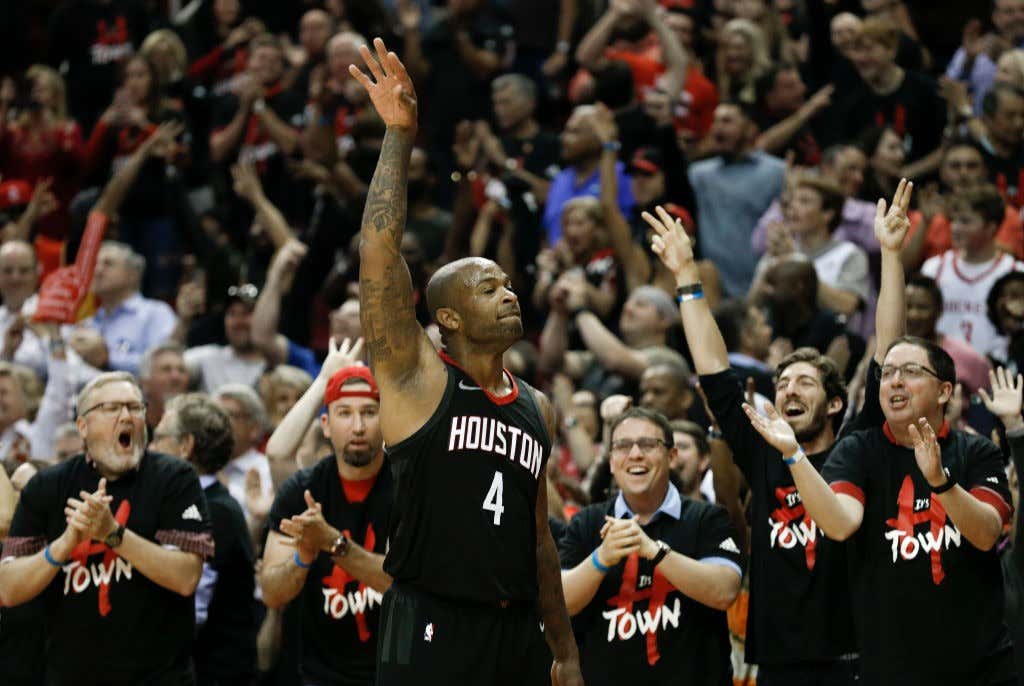 (Source) – As impressive as forward P.J. Tucker’s play was throughout the Western Conference Finals and in the Rockets Game 7 loss, it took even greater toughness than was displayed on the floor.

Tucker played Game 7, Rockets coach Mike D’Antoni revealed, hours after undergoing three root canal procedures. While playing through pain, despite the pain medication, Tucker did not tell his teammates that he went directly to a dentist after the Rockets flight from San Francisco landed on Sunday or that he had played Game 6 with several cracked teeth.

Say what you want about PJ Tucker as a basketball player, but holy shit is he one tough son of a bitch. Here I am, a guy that has to take a second to regroup when I drink the water I get from my fridge (mixed with crushed ice of course, only way to go) too fast and my teeth hurt. Knocks me out for a good 15-20 seconds. Not only is PJ Tucker playing Game 6 with cracked teeth, but then turns right around after three goddamn root canals and plays a Game 7? I have to imagine one root canal is pretty uncomfortable, but three? If you don’t respect that then I don’t know what the hell is wrong with you. He was awesome in that game too, putting up a nice 14/12 with 4 steals on 5-9 shooting. Much respect for being able to block out the pain and discomfort and show up that like in the biggest game of his life. I also love the fact that he didn’t tell a soul, no excuses.

Tucker was pretty good in the entire WCF series too. He averaged a respectable 8.7/9.0/1.9 on 47/48% splits with 1.9 3PM a night. Pretty impressive that a 33 year old could be that productive playing 33.5 minutes a night while also experiencing extreme pain. If there is one guy on HOU that shouldn’t hang his head even though they came up short, it’s Tucker. He played his goddamn heart out.

And to be honest, this is a great look for the NBA. We hear all the time about how NBA players are soft, and hockey guys are tougher blah blah blah, well even the hockey hardos should respect this right? I know in hockey guys lose teeth and don’t miss a shift, but this is as close as the NBA is going to get to that in my opinion outside of that time Isaiah Thomas played with a missing front tooth. This also shouldn’t really surprise us when it comes to Tucker’s toughness, this stat is pretty crazy

The Rockets have an interesting decision as to what they are going to do with Tucker moving forward if they want to get serious about opening up cap space for Lebron/CP3. He currently has 3 years left on his deal, but the 3rd year is only partially guaranteed. That becomes fully guaranteed at $7.9M if he is not waived on or before July 1st 2020. He’s slated to make around $15M over the next two seasons, and he’ll be 35 at the end of his deal if it’s picked up. The problem is going to be if Morey wants to get past GS, someone is going to have to go whether it’s Gordon or Anderson or Tucker. If it were me, I would do everything I could to try and open up space while still being able to keep Tucker, because you need guys like him if the Rockets want to get to where they are looking to go.

I like to joke about how everyone calls PJ Tucker the Lebron Stopper, but I have nothing but respect for this move. What a badass.