SAMMY DEEP THROAT. Well wouldn’t this be something. You heard that anonymous kid who we have no way of fact checking if he took Hinkie’s class at Stanford: Sam Hinkie is 1000% the source. A THOUSAND PERCENT. That’s 900 more percents than certain. Put it in the books.

Now I know nothing about Sam Hinkie from a personal standpoint. Maybe he would have too much “Honor” and “Respect” to pull this move. But from an outsiders perspective of the man, this calculated move outing Colangelo’s burner accounts based on algorithms and analytics is way too Hinkie to not consider. As we know, Sam Hinkie was ousted by the Colangelos after the long time Father-Son tandem was inserted personally by Adam Silver because the commish was tired of the Sixers embarrassing the NBA. Me thinks Samuel was not too pleased to see stuff like this being trolled about by his successor: 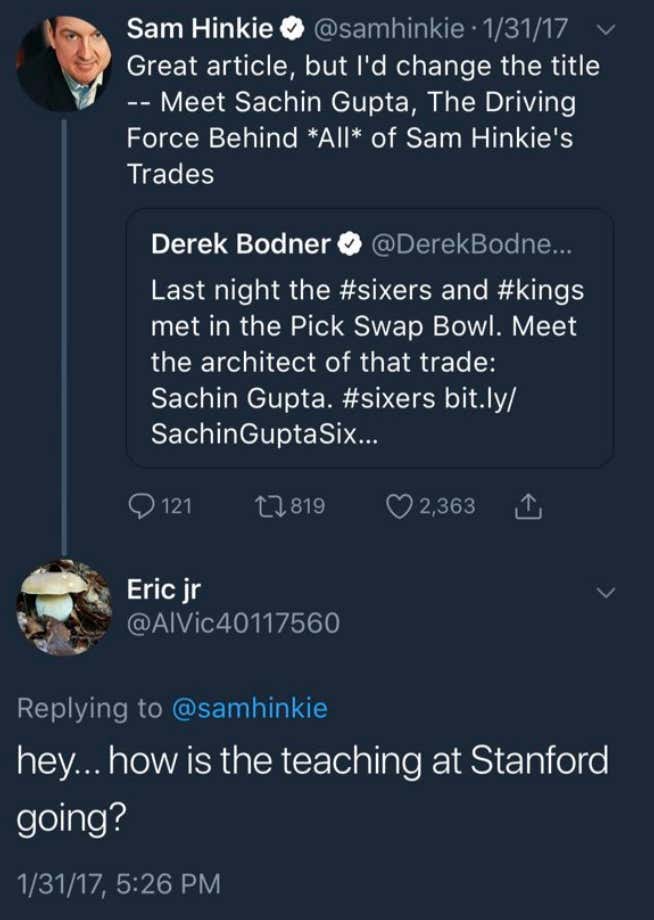 Yeah, it’s not THAT far out of the realm to think Sam Hinkie got some revenge. Meanwhile, Colangelo is frantically reaching out to the owners of the burner accounts…so he’s possibly contacting himself? That’s some next level PR stuff.

Otherwise, I wonder what Colangelo’s Barstool commenter names (yes, plural) could be? A quick glance behind the mainframe of the blog and I see the same exact IP address under the names PatsSuck69, bigwang24, trey432, and dozens more created usernames under anonymous AOL.com email addresses. Could it be Bryan Colangelo bashing his own team while defending himself, and his shirt collars, to the masses in the comment section? Eh, I don’t know. This single commenter under multiple names spends his time commenting on, again, DOZENS of handles while stating almost every single time “I’m from Philly, Smitty doesn’t know Philly, Philly deserves a Philly blogger” and the dreaded, always a real life nail in the coffin “#FireSmitty”. If that were Colangelo were that much of an internet troll to be that dedicated from a single IP address on the Maryland/Virgina border outside of D.C. (Nate Land, coincidentally)…touche. I would have no choice but to admire the art. Still kind of do respect someone who would put that much time and effort into attempting to disparage a fucking blogger, anyways.

Also, for those who have no idea what a “Burner Account” is, Riggsy explained it well this morning to some from Cretaceous period: