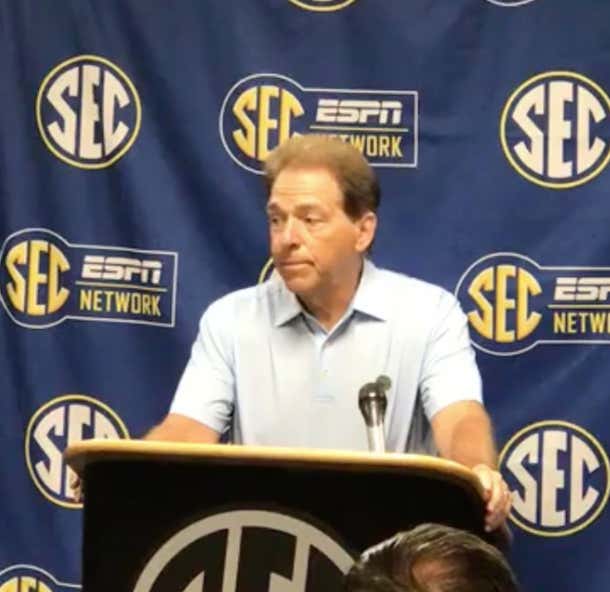 Yesterday, SEC spring meetings began and will continue for the rest of the week. The spring meetings are not as great as the infamous SEC Media Days, but thankfully for us, Nick Saban was in mid-season form when he was on the mic:

Mouse manure…..elephant doo doo…..rat poison…Nick Saban is the animal metaphor king. I really look forward to his future after coaching (lol if there is a future for Nick Saban after he retires)…maybe he could write a metaphor book? I’d love to learn how to talk more like Saban. Hell, I’d read a children’s book by him.

Later on, a reporter asked Saban his thoughts on the current SEC transfer rules and how they relate to recent Alabama transfer Brandon Kennedy, which Saban was slightly triggered by:

“When we make a rule that guys can transfer whenever they want to transfer, how are we supposed to get people to do what they should do?” Saban asked.

“If we agree in the SEC in these meetings that we’re going to have free agency in our league and everybody can go wherever they want to go when they graduate and that’s what’s best for the game, then I think that’s what we should do,” Saban said. “Then Brandon Kennedy can go wherever he wants to go. But if we don’t do that, why is it on me?”

A little backstory: Brandon Kennedy is a recent graduate transfer from Alabama. The offensive lineman expressed his desire to transfer to either Tennessee or Auburn. Although he is a graduate transfer, Kennedy does have two years left of eligibility, after graduating as a redshirt sophomore. However, Alabama has blocked Kennedy from all communication with other SEC schools and seven future out of conference opponents. This is typically how it goes with SEC transfers. Is it fair? No. Should you blame Nick Saban about it? No.

The press conference wasn’t it for Nick Saban as he hoped on the radio waves with PAWLLLLL:

This is a completely bizarre quote from Nick Saban. His theory on early vs. late season losses in relation to the playoff was tested perfectly, by his team, just last season after a loss to Auburn in their last game, but still won the national championship.  That’s not to say he is completely wrong, but there are other things that are bigger problems when it comes to the playoff.