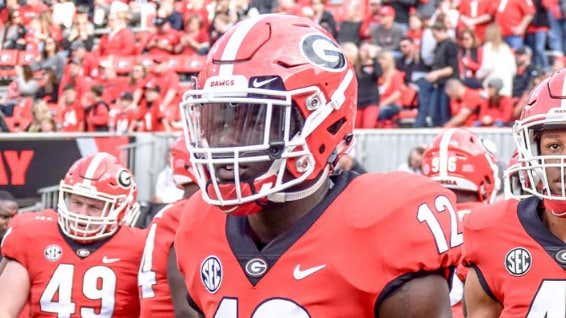 Dawg Nation-Detravion “Tray” Bishop, a redshirt freshman defensive back from Dawson, Ga., was booked into Athens-Clarke County Jail at 12:25 p.m. on Wednesday and released less than an hour later on $5,700 bond. The arrest came after UGA Police began investigating a complaint made by a woman on April 28, who told authorities that Bishop recorded a sex act without her permission on Nov. 5, 2017.

“The complainant wished to report that there was a student going around showing people a sex tape of her … without her consent,” the police report said. “… A subsequent investigation into this incident led us into determining that the crime of unlawful eavesdropping occurred on [Nov. 5]. The investigation showed that Detravion Bishop had recorded [victim’s name] inside his dorm room without her permission and without her knowledge.”

Eeeeekkkkk!!! Never got the idea of recording yourself having sex and then showing it off to your friends. Talk about taking the bragging about sex to a whole new level.

Georgia went on to lose the next week to Auburn, 24-10. Bishop was just a freshman in 2017, but could his infamous sex tape have distracted Georgia? According to reports, it seems as if he was really showing it off. Maybe the defense was studying a different film than the ones they were supposed to be watching featuring Jarret Stidham and Kerryon Johnson?! All possibilities.

The video was not reported until April 28th, so it seems Bishop was quite proud of this video to be showing it for almost half of a year. It being reported 6 months after the fact is definitely a bit strange, BUT according to the reports, UGA Police seemed to have done a thorough investigation.

No word yet from Kirby Smart on a punishment for Detravion. Bishop was a 4-star recruit in the class of 2018 and was expecting to compete for a starting position in 2018. He wouldn’t be a significant loss for Georgia, but definitely was someone that the Georgia D was expecting to contribute.