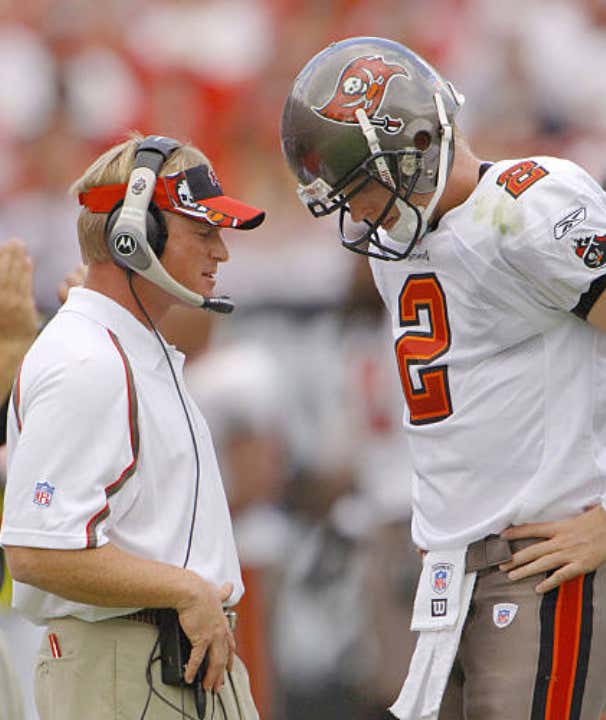 Football guy. You think Jon Gruden believes in honeymoons? I bet when Jon took his wife Cindy on their post-marriage getaway he had her running wheel routes in the sands of some tropical island. He probably mixed in a few corner routes and some sluggos here and there until she got it right. And that was all before lunch!

I’m just trying to picture Jon back in the early 2000’s with his flip phone trying to get Simms on the horn. Simms probably came back from a night out with his wife at some romantic restaurant right near the Venice Canals and found 100 missed calls all accompanied with voicemails.

“Hey Simms, it’s Coach again. If you’re facing Cover 0 on the left side, but zone on the right who is going be your Mike linebacker and how are you going to audible your receivers to get the first on 3rd and 7. Looking forward to hearing from you in the next 90 seconds.”

March is typically a resting period for football players with the season having just ended the month prior. Guys are taking vacations, not touching a football, and trying to reset their minds before the offseason training program kicks in. Here’s Chris Simms thinking he can sneak in a full two week escape with his new bride, but not on Chucky’s watch. Hey Chris I’ve got an idea! How about turn your phone off dude. It’s like 2005, you don’t need your phone if you’re with your wife on your honeymoon. It’s not like today’s day and age where we’ve got Twitter and the internet at our disposal. You needed your phone back then for one thing and one thing only: phone calls. You just turn that bad boy off and Gruden can’t harm you.

To be fair if Simms turned his phone off I could see Jon getting on a flight to Italy and finding him like Liam Neeson in Taken. This was a lose-lose for Simms the moment he booked this flight. Luckily for Derek Carr, he married his wife back in 2012 so this won’t be an issue for him.