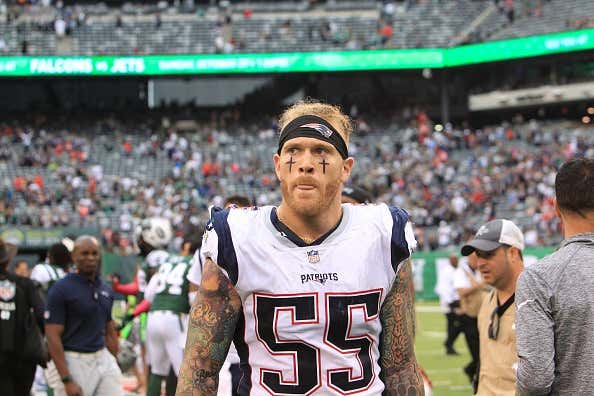 The San Francisco Chronicle just did a profile of 49ers defensive end Cassius Marsh where he bared his soul about how much he loves his dog, loves John Lynch and loves being a Niner, and how much he flat out hated being with the Patriots:

In New England, Marsh, a classic speed rusher, said he was miscast as a “coverage” linebacker. And he became so disenchanted with his role and the Patriots’ culture that he “wanted to get waived” when he requested a meeting with head coach Bill Belichick that precipitated his exit.

“They asked me to do a bunch of stuff that I had never done: covering running backs and receivers and basically almost never rushing the passer, which is what I did in playing defensive line,” Marsh said. “They don’t have fun there. There’s nothing fun about it. There’s nothing happy about it. I didn’t enjoy any of my time there, you know what I’m saying? It made me for the first time in my life think about not playing football because I hated it that much. …

“I confronted (Belichick) about all the things that were going on,” Marsh said. “I won’t get into detail, but it was B.S. things they were doing. I just wasn’t a fan. And so I, basically, without asking to get cut, I kind of asked to get cut. … I had confidence that I would have an opportunity elsewhere and I would take advantage of it.”

I suppose the natural thing would be for me to get pissed off at Cassius Marsh and resenting the fact that a guy the Patriots traded a 5th- and a 7th round draft picks for spent all of his nine games in New England bellyaching about how he was being overworked. But I’m not even mad. Which is to say, I’m not as mad about what he said as I am about the fact they squandered two picks on a guy who gave them a total of 14 tackles and one sack before whining his way out of town.

Sure, this will be spun in a way that confirms what Lane Johnson’s spent his whole Spring saying, that Bill Belichick pretty much runs the team like a Far Asian cell phone factory where the workers hope the guards put their rifles down just long enough for them to get to the roof and hurl themselves off or whatever. But that’s fine. All Marsh is really doing is confirming what Pats fans love most about this team. That here it’s all about winning and nothing else.

In Foxboro, no one cares what personal numbers they put up. It’s not about focusing on your favorite specialty (ie rushing the passer) and leaving the other stuff (ie pass coverage) to somebody else (ie the other 10 guys). And everyone measures success in rings, not how often your coach rubs your belly and tells you what a good boy you are.

And that’s not for everyone. Some guys want to win, others want Pete Carroll to validate their feelings. Here, it’s winners only wanted. It speaks volumes that Marsh was so unhappy last year on the defending Super Bowl champions that had the best record in football, but found his bliss in San Fran, a team that at the time he joined them was 1-10. So he was never, ever going to be a fit in a system that only cares about team goals. Which explains why they kicked him out the door at a time when they were desperately thin at DE. Because they’d rather go with Eric Lee and or move Kyle Van Noy outside than stand the sight of a guy who only wanted to rush off the edge and pad his meager stats.

So best of luck to him. I look forward to seeing how the Niners will do this year. Maybe they’ll make the playoffs and Marsh will record the first postseason tackle of his career. Meanwhile, Belichick will be in hot pursuit of his eighth ring. And the Pats will keep looking for the next Shea McClellin. Who, retiring yesterday due to the accumulated effect of five concussions, had this to say to Mike Reiss:

“It was awesome, first year we won the Super Bowl, can’t complain about that. Just meeting all the guys in the locker room, that’s going to be the biggest thing I’m going to miss, that’s for sure. It’s a great locker room culture in New England. Everyone is so close there, it’s just something special. You can just tell because it transfers to the field.”