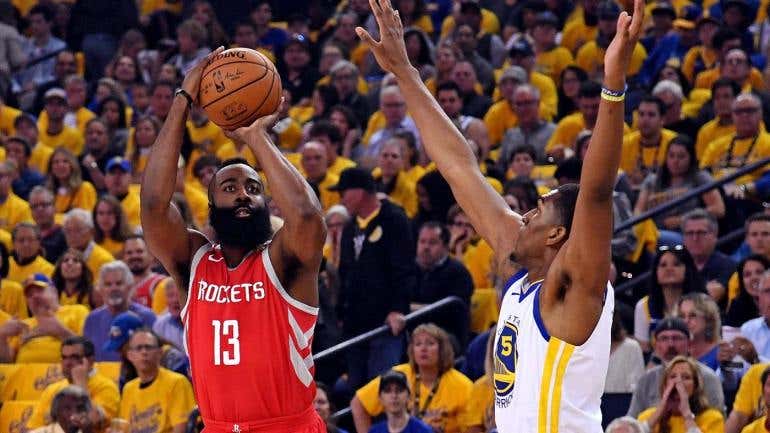 We know all about last night. We know about the missed threes and the Warriors shooting 16% from behind the arc. We know all about Trevor Ariza going 0-for-12 from the field, James Harden going 12-for-29 and Eric Gordon going 9-for-22. You can debate all you want about the shooting and the thought process of a team like Houston relying on the 3-point ball so much. That’s for an entire different blog. This blog is all about tears. This blog is all about shitty performances in the playoffs and more specifically terrible shooting performances. Now, this can be anything from bad shooting for an entire game, a specific shot, etc. These are just the ones that popped into my mind right away when watching the Rockets chuck up bricks late last night.

This one hurts a bit, but it’s the one that everyone immediately talks about when you look at bad shooting performances. Game 6 ended with Hakeem getting enough of his hand on a three by Starks and then game 7 happened. This was supposed to be the Knicks year and Starks was a good player. Unfortunately this shooting performance happened quite literally at the biggest moment and one that will always be talked about.

Nick Anderson, Game 1 1995 NBA Finals
0-for-4 from the free throw line over the last 8.5 seconds
So a bit of a different one here as you don’t typically see free throw shooting here. That said, Nick Anderson’s missed free throws at the end of Game 1 is the epitome of bad shooting performances. Anderson was a 70% free throw shooter and just needed to make one. The Magic led by three with 8.5 seconds left and Anderson missed short on the first two shots. Next time up, just about 7 seconds left and the Magic still up three. One make and the Magic go up 1-0. This time, Anderson misses long on both free throws. Kenny Smith hits a three to force overtime and the rest is history. Free throws, kids. They are free.

Kobe Bryant, Game 5, 2000 NBA Finals
4-for-20 from the field
There are a couple of different ways you can go with Kobe and bad shooting in the playoffs. That said, Game 5 against the Pacers always sticks out to me. Not only did Kobe go 4-for-20 but the Lakers got absolutely dominated by the Pacers, losing 120-87. Granted, the Lakers did go on to win in Game 6, but in his first NBA Finals, 4-for-20 isn’t exactly the best stat line.