Summer basketball is here for a lot of players, which means we’re about a month away from getting full court 5-on-5 All Star game level talent runs out of New York and LA featuring players like LeBron, Hoodie Melo, Durant, and many other Hall of Famers. But not Joel Embiid. Not every great player needs or desires to play with the guys they have to see over the course of an 82 game schedule. Some dudes prefer to work solo with a shooting coach, other guys like to run back in their home towns, and then there’s Jojo who seems to prefer dunking on regular, every day folks from Broad Street to Bermuda.

I know some curmudgeons are tired of his “try hard” act but if you watch this video and your takeaway is anything other than “That’s fucking awesome” then you have a big, runny dump in your pants. Because that was hilarious. First of all, why did this dude try to double team the post after Embiid dropped in an entry pass. Uhh, hey man, you’re covering JOEL EMBIID. Let Travis and Tyler duke it out on the block and you try and deny the pass back out to the lone All Star on the court.

Once Embiid gets the ball back and that whole half of the court is cleared out, there’s nothing left you can do. I’d like to give this young man props as he didn’t fall for the same pump fake that Al Horford did 10000 times in the second round. But maybe Al knew what he was doing because I’d much rather jump at a pump fake than get the ball thrown directly off my face in front of all my pals, some of which holding cameras. Off The Heezy is hilarious 100% of the time and will remain that way from now until the Sun explodes. But where this bearded fella really screwed the pooch was in this moment. 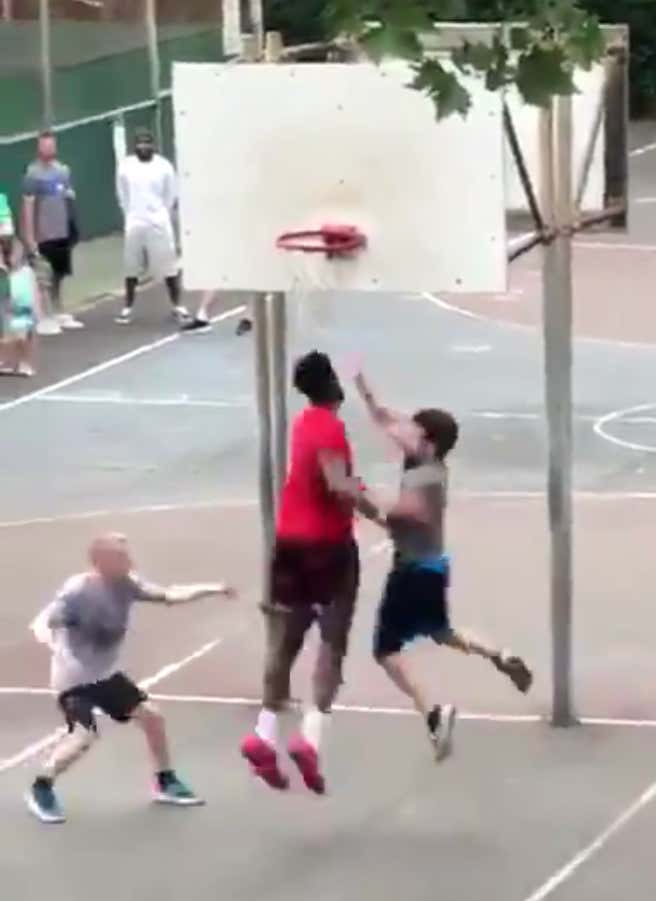 What are you jumping for? You think you’re going to block the 7’2″ all world athlete at the rim? Really only negative things can happen for you here. Either you get dunked on, which isn’t all that bad given the circumstances – the circumstances of course being that he’s Joel Embiid and you are not – OR he lands funny on your corpse, re-injures his knee and now you’re the public enemy #1 in Philadelphia. I think tar and feathering is still super legal in Philly, too, so maybe just pull back a little bit next time for your own safety.