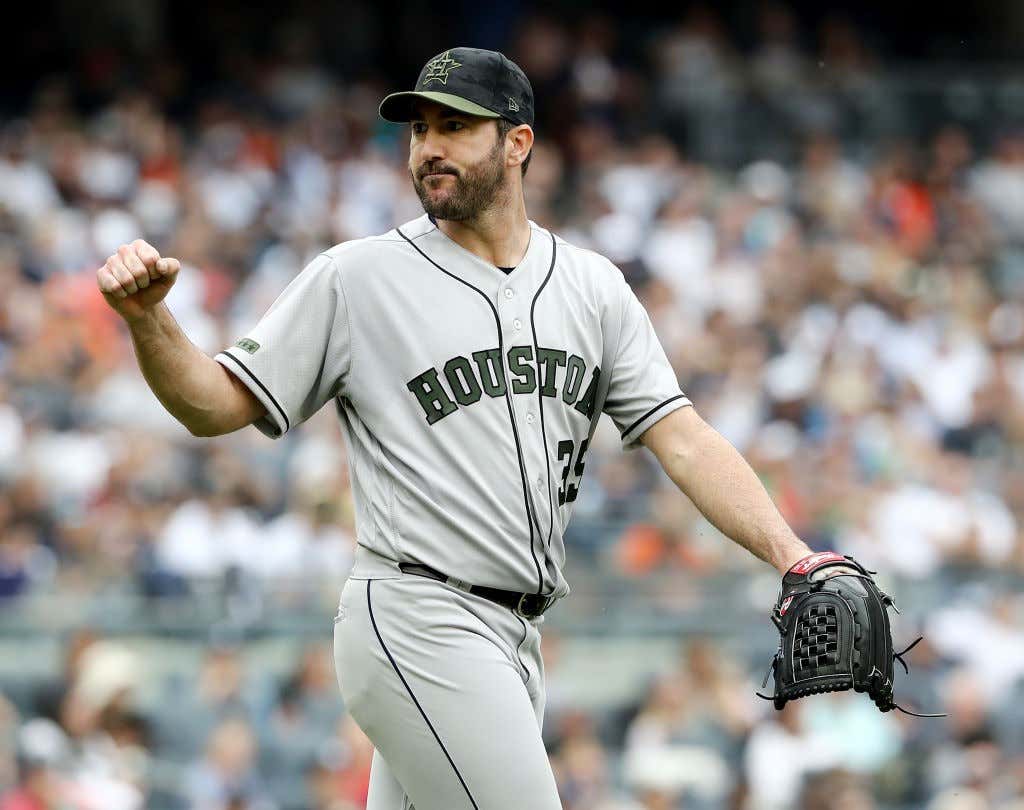 Goddamn Justin Verlander continues to be a machine. I mean this game went pretty much how you would expect, with Domingo German facing the former CY Young winner. Verlander went 6.1 IP giving up one run and saw his ERA jump up 1.11. His road ERA is now 0.44 as he completely neutralized this lineup. He’s just stupid good. Verlander tipped his cap to the Yankee crowd as he departed in the 7th while they showered him with boos. That’s got to be a great feeling as a road pitcher.

The Astros offense did their job early in the game grabbing three runs in the 2nd on a J.D. Davis homer. German had to come in with a 3-1 fastball and he left it too far over the middle of the plate.

The moment that ball landed over the left field wall every Yankee fan pretty much knew this one was over. German really wasn’t bad in this one, but saw his defense fail him several times. To start the 2nd Didi Gregorius should have had a slow roller hit to his right side. It trickled off his glove on a bad bounce, but he somehow wasn’t charged an error for whatever reason. Who knows if Didi makes that play what happens the rest of the inning.

In the 4th the Astros tacked on another run, which all started with a lazy Gleyber Torres throwing error. After two atrocious outings against the Royals and A’s, German was much more effective today. He commanded his fastball and secondary pitches way better and as a result only walked two batters while punching out seven. I would assume Boone liked what he saw today from the right hander and will give him at least one more start when his turn comes around next in the rotation.

There were two “bright spots” in the lineup today. The slumping Didi Gregorius picked up two hits off of Verlander, one being a dribbler down the third base line against the shift, and the other a ground ball up the middle. I’ll take it if it means getting his mind in the right place and breaking out of this nightmare stretch. Greg Bird was slotted in as the cleanup hitter and picked up a pair of hits as well, including his first homer of the season.

Bird worked pretty good at bats all day which is something you can always expect from him. He’s got an excellent eye and rarely chases out of the zone. Gleyber Torres moved up from the 9 hole to the 5 spot and went 1 for 4. I don’t think that’s going to be a permanent spot for him moving forward and just think it was a product of Stanton having the day off, but we’ll have to see.

Overall, a pretty boring game on this Memorial Day afternoon as Verlander asserted his dominance over this lineup. Ken Giles worked a scoreless 9th inning this time instead of blowing the game and punching himself in the face. Tomorrow finesse pitcher-turned 100 mph flame-thrower Charlie Morton gets the ball against C.C Sabathia who looks to rebound from three mediocre starts in a row.

Tommy and I just spent an hour trying to record The Short Porch, but ran into technical difficulties because we’re stupid people. We’ll be recording at the break of dawn tomorrow and will have the new episode out by around 10:30 AM. Apologies.