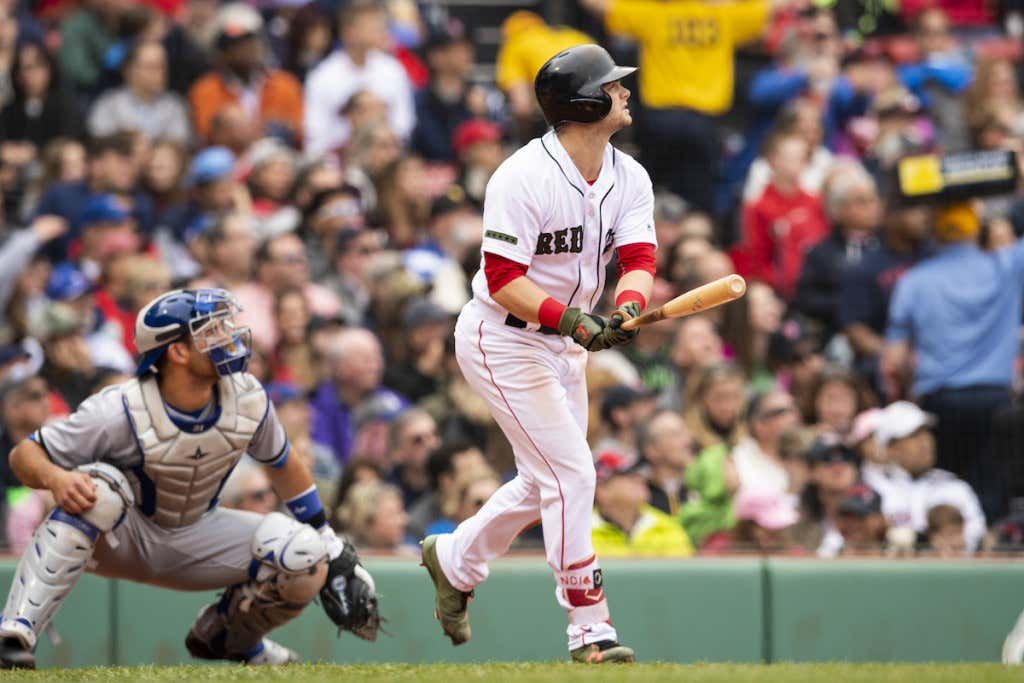 Back on April 25, Andrew Benintendi was hitting .218 with a .706 OPS. Since April 26th, he’s quietly been one of the best hitters in the American League.

After going 3-for-5 on Monday with a homer, a double, a single, and 4 RBI, Benintendi is now hitting .342 with 1.032 OPS over his last 29 games. He’s eighth in the league in batting and seventh in OPS over that span. The reason why he’s flown under the radar so much is because Mookie Betts (1.182 OPS, 1st) and JD Martinez (1.136 OPS, 3rd) have both been better over that same range of games.

Despite his struggles through the first four weeks of the season, he hasn’t struggled at any point when hitting at home this year. Like, at all. In his 25 games and 114 plate appearances at Fenway Park this season, Benintendi is hitting .378 with an 1.143 OPS. That batting average is fourth in the majors and his OPS ranks eighth.

David Price got the start in this game, and took a comebacker to the chest in the first inning. Price fielded the ball and recorded the final out of the frame, walking off the mound without reacting to the impact at all, but the contusion appeared to have bothered him when he came back out in the second inning. Price walked the first batter on ten pitches and the second batter on four pitches. To his credit, after a mound visit to check in on the status of his health, Price stayed in the game and got out of the inning without allowing a run.

He walked four total on the day and exited the game after five innings, so there were certainly some things to not like, but the fact that he held his opponent to two earned runs or less for the fourth straight start is something to feel great about. There’s a pattern here.

JD Martinez went deep again, his 17th. That tied Mookie Betts and Mike Trout for the major league lead at the time, but Trout hit his 18th today. Mookie sat out again on Monday with what’s being called “side tightness” and is expected to return tomorrow.

Over his last 162 games, dating back to last year, Martinez has hit 56 home runs, which is second to only Giancarlo Stanton, 59, who has played in five more games. Martinez has also driven in an MLB-best 136 runs, has an MLB-best 397 total bases, and is second to only Mike Trout for the best OPS in the majors (1.019). He’s been worth every penny out of John Henry’s pocket. He’s also currently on pace to hit 51 home runs this season.

On Tuesday, it’s Rick Porcello versus Marco Estrada. Out of the 11 starts that Porcello has made this season, his four worst starts have come in the month of May. His last time out was statistically his worst start of the season, and that’s with a pair of five earned run starts this month outside of that. He’s going against a Blue Jays team that he’s faced once this year, going seven innings with three earned runs and nine strikeouts back on April 24.

For Toronto, I’d say that “stellar” is not a word that I’d use to describe Estrada’s season thus far. He’s got an ERA of about five and a half on the year, an ERA a shade below five for this month, and his last time out he gave up four earned runs in four and a third to the Angels, taking his fifth loss of the season. He faced the Red Sox back on April 26 and gave up five earned runs on eight hits in five innings. Took an L that day, too.