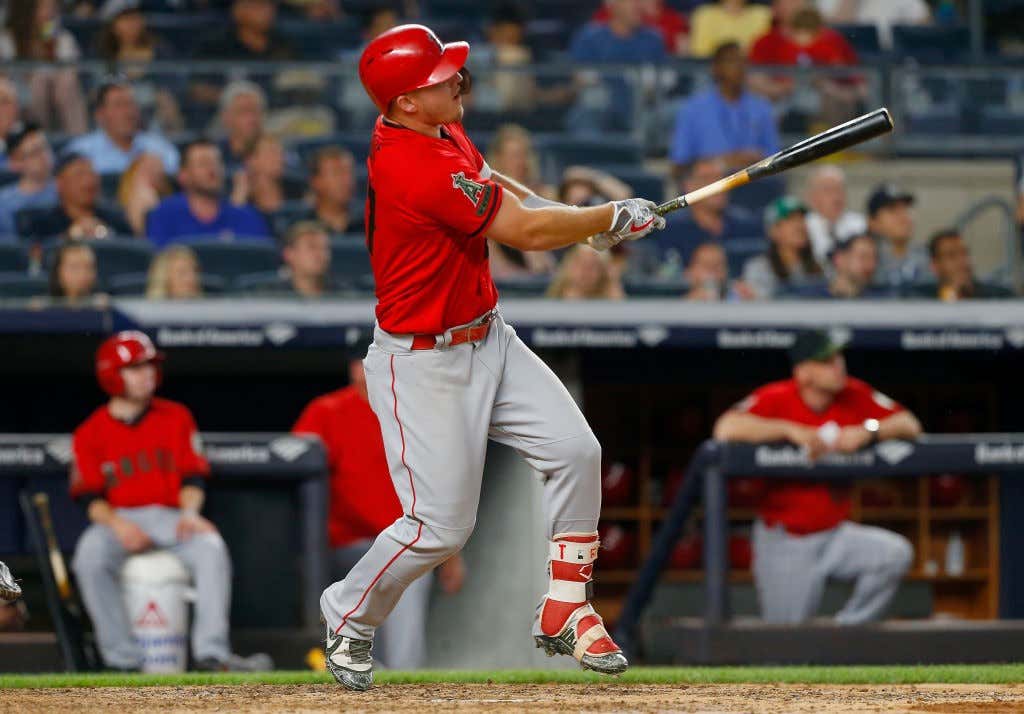 So that Mike Trout guy is really good at baseball huh? I mean, holy shit he really is the best player in this game and it ain’t close. Any Red Sox fan that actually thinks Mookie Betts is better than this man is certifiably insane. He’s a fish and he doesn’t get out. Last night the God of Major League Baseball went 5 for 5 with four RBIs including a towering home run. Sonny Gray literally stood zero chance of getting him out at the plate all night long.

Sonny was laughably terrible on Saturday, after maybe his best start in pinstripes last weekend. He claimed he had good stuff out there. Well, this best sums up Sonny’s outing.

Just great. To start off the night, Gray allowed a lead off single to Cozart after a long battle, bringing up Trout with a man on, which is always a death sentence for any pitcher. Trout made Sonny pay to no surprise, jumping on a first pitch fastball.

The Yankees offense certainly made their presence known immediately as Gardner and Judge belted back to back jacks in the first inning to claim the lead. Austin Romine later followed with a two run homer of his own off the right field foul pole. It felt early like a night where the Yanks would score a billion runs and cruise to a W. The Fish had other plans.

I don’t know why you would ever pitch to Mike Trout with first base open. Quite frankly I would walk Trout if the bases were loaded. You’re just asking to get burned if you pitch to him with anyone on. Sonny found out the hard way.

This was a tough day for Gray after solid starts in three of his last four. Many had hoped with his quick pace he would mow hitters down like he did against Kansas City last weekend. That was not the case last night. Sure, he had seven strikeouts, but when he wasn’t getting hitters to chase he was leaving balls well over the middle of the plate just asking to get tattooed. He now owns the highest home ERA of all qualified pitchers and the third highest among starters in general. He faced 21 batters last night and 11 reached safely. That’s unacceptable anyway you cut it. After the game he essentially held himself with zero accountability, which was goddamn infuriating.

He kept acknowledging he had good stuff, but that the results simply weren’t there. How about just saying you have sucked all year and you need to pick your shit up? How about acknowledging that this organization traded some good young players for you to be their number 2 guy and you’ve barely earned a spot in this rotation this year? Don’t go out there and give me 3.1 IP getting hit all over the place with zero control and tell me you had good stuff. That’s a fucking joke Sonny. Hold yourself accountable like Giancarlo did when he couldn’t hit shit in April and was getting booed out of the stadium. What did he do then? He stepped right in front of the media every night and said he deserved the boos because he sucked. Don’t spit in my face and tell me your stuff was good on a night you got shelled. Fuck that, man.

Once Sonny departed in a 5-4 game, Jonathan Holder took over and held things together. I think we just have to accept as a fanbase that Holder is going to get people out at this point. Holder went an inning and a third last night, striking out three, and walking just one. He has not given up an earned run since April 6th and has not allowed an inherited runner to cross home plate since May 6th. I trust Holder getting big outs now. He’s been nails.

Tommy Kahnle made his return from the disabled list and I thought got a really short end of the stick. He did walk the first batter of the inning which is always a cardinal sin, but he should have been handed two outs when Cozart hit a tailor made double play to Andujar. Gleyber Torres took his eye off the throw from third as he got ready to turn the double play. He dropped the throw and everyone was safe, setting up Mike Trout with two men on and nobody out. Trout obviously came through with an RBI double, followed by a Chris Young walk and a Pujols RBI single. The game was over at that point, but it all could have been way different if Gleyber turns the DP. A positive I’ll take from Kahnle was that his velocity was back, hitting 96 mph consistently on the gun. That was a big problem of his that led to his DL stint. Everything after the Gleyber error I throw out the window because that changed absolutely everything with his outing.

The big news of the day was not necessarily the return of Greg Bird, but the demotion of the beloved Yankees utility man Ronny Torreyes. I did say in the beginning of the year I did not see where Ronny Baseball fit within this 25 man roster when everyone was healthy, but I’ve got to admit I was still shocked by this move.

I thought A.J. Cole or Austin or somebody else was getting the demotion, and never thought in a million years Ronny would get the unlucky draw. Torreyes has such an incredible impact within this locker room and is loved by every single player and fan that bleed pinstripes. Yes I know this is a business at the end of the day, but you hate to fuck up team chemistry like that. Boone mentioned that he planned on getting Austin some starts against lefties coming up, including Keuchel in a few days while Ronny’s potential starts were not guaranteed. I’m sure they’ll be fine in the long run, but seeing Ronny be the name sent down was a bit jarring to say the least. Bird went 0-4 with two strikeouts in his debut, but didn’t break his ankle which is a positive sign.

It was an ugly loss for the Bronx Bombers with Sonny being atrocious and the defense failing Kahnle leading to the Halos’ explosion. Today the Yanks look to grab the series victory with Tanaka on the bump against Garrett Richards. Just turn the page and move on. Oh, and maybe don’t pitch to Trout anymore.