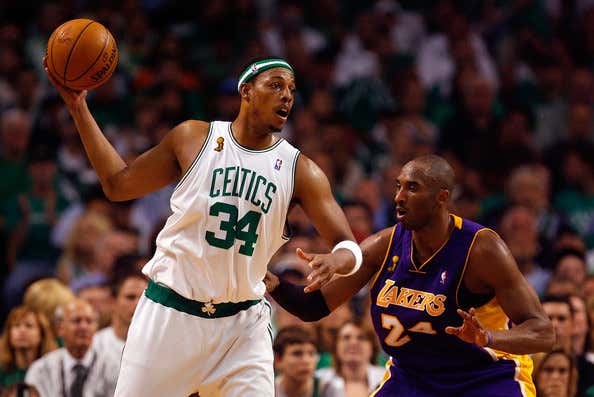 No. 6 – 2010 Finals – Los Angeles Lakers 4, Boston Celtics
MVP: Kobe Bryant
Notable Players: Kobe Bryant, Pau Gasol, Ron Artest, Paul Pierce, Kevin Garnett, Rajon Rondo, Paul Pierce
Coaches: Doc Rivers (Boston Celtics), Phil Jackson (Los Angeles Lakers)
Best game: Game 7 (Lakers won 83-79)
Biggest moment: From one standpoint you can argue the biggest moment was Kendrick Perkins tearing his MCL and PCL in game 6, forcing him to miss game 7. Now, Perkins wasn’t one of eight best players in this series, but his role was vital to the Celtics and what they wanted to do on both sides of the ball. In terms of just basketball go to the last minute of game 7. The Celtics had just cut the lead to three after a Rasheed Wallace three. Ron Artest answered with a three of his own immediately after to push the lead back up to 6. Ray Allen then came down and hit a three to cut it back to three. Kobe missed (shocking) but then Pau Gasol got the offensive rebound and then kicked it to Kobe who hit two free throws. The Celtics answered again as Rondo hit a three to cut the lead to 81-79, but ultimately Vujacic’s two free throws with 11 seconds to go ended the game.
Background: A rematch from the 2008 NBA Finals, the Celtics and Lakers had two very different paths to the Finals. The Lakers were the best team in the West and pretty easily advanced winning the three series 4-2, 4-0 and 4-2. The Celtics on the other hand were just the 4 seed in the East, but ended LeBron’s first run in Cleveland with a 4-2 series win in the Eastern semifinals. The Lakers were able to get to the Finals for the 3rd consecutive season, losing to the Celtics in 2008 and beating the Magic in 2009.
Historical standpoint: This would be the last time the core of Garnett/Allen/Pierce/Rondo would really compete for an NBA Finals. They fell to the Heat in 2011 and 2012, ultimately deciding to rebuild after the 2012 season. The Celtics eventually took a step back until recently with Stevens/Horford and that group. For Kobe, he won his MVP though it was one of the more weird MVP awards in NBA Finals history as he did struggle in that game 7. That game also provides us one of the what-ifs in NBA Finals history as you wonder if the Celtics win with Perkins out there. For the Lakers, it was the last time they were competitive. The following season, they lost to the Mavericks in the NBA playoffs and Jackson retired.
Video highlights from the series: