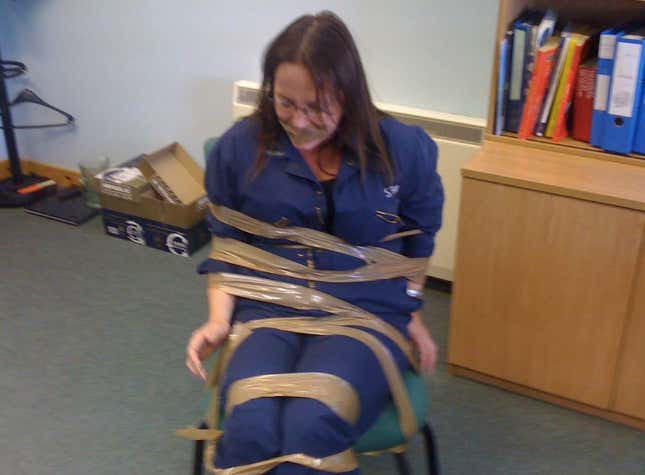 NY Times- In the photograph, the woman, wearing a blue jumpsuit, is strapped to a green chair with tape wrapped around her legs, arms, torso and mouth.

The picture was taken in 2010, and the episode was a warning, according to the woman in the chair, DeeAnn Fitzpatrick, after she complained about what she called a toxic atmosphere of bullying and harassment by co-workers at a fisheries office on the north coast of Scotland.

“I was taped to a chair by two of my colleagues and told, ‘This is what happens when you speak out against the boys,’” she told a judge in 2017.

Ms. Fitzpatrick, now 49, took the government of Scotland to court that year, accusing co-workers of waging a campaign of harassment in the Scrabster office of Marine Scotland, a government fisheries watchdog, on the Caithness coast.

Pretty fucked up story out of Scotland today. In 2010, DeeAnn Fitzpatrick was punished for complaining about the lads at work by being taped to a chair and gagged. Not exactly sure what’s going on in Scotland, but uhhhh nope. That’s not a good idea at all. You almost can’t even say the Scots are behind us on gender equality because I can’t remember a time when we were ever at the “bind and gag” stage of workplace sexism.

Ms. Fitzpatrick told the court that she had received Valentine’s Day cards from someone at work in which she was called a troll and told, “We miss you not.”

Sheeeesh! Sounds like these assholes REALLY didn’t like DeeAnn. “We miss you not” is a SAVAGE thing to write on a Valentine’s Card. They didn’t even go with the slightly nicer Borat “We miss you. NOT!” Their message captures the spirit of Valentine’s Day, then completely flips it around and, in old-fashioned English, lets her know they don’t mind that she’s gone. Brutal!

The former co-worker told the BBC that the accusations were false, that he didn’t remember the events and that if anything had happened it “would have been office banter.” Efforts to reach the former worker were not successful.

Hard to call this “office banter” given that she can’t really banter. Banter requires a back-and-forth, a tit-for-tat, some verbal ping pong. Whenever you place tape over someone’s mouth, it throws a wrench in the banter. It’s a clear message that tells the other person you don’t care what they have to say, and also that you want them to be your prisoner.

PS- I’m not into choking at all. Some people love it. I hate it both ways–as the choker and the chokee. I was pretty asthmatic as a child, so my lungs struggle enough during sex without her/Frankie restricting my airflow. I start to see spots and my feet tingle uncomfortably like I’ve just woken up from a bad nap on an airplane. And in terms of applying the choke, I have NO idea what the right amount of pressure is. Hard to know if she’s tapping out or just spanking me. Too much grey area. I’d much rather use my hands for playing the piano or stroking your hair or whatever. Seems a lot safer.