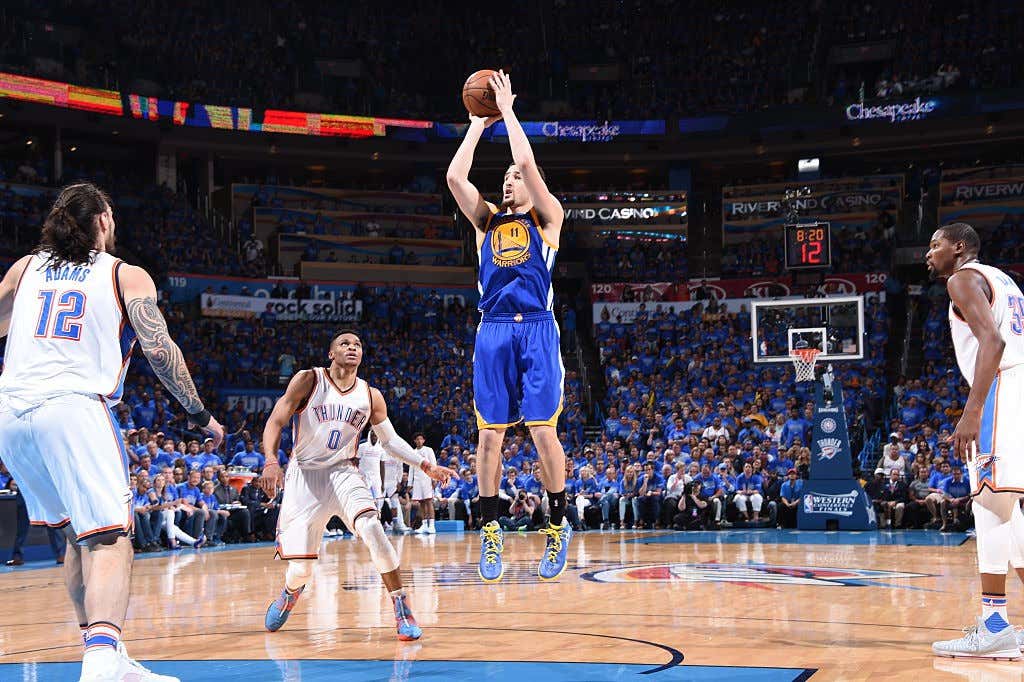 The Golden State Warriors have been on some sort of run since the 2014-15 season. This isn’t really news, but now that they face their first bit of real adversity in what feels like forever, it brought my brain back to the last time we saw the Warriors in a 3-2 hole. It was back in 2016 heading into Game 6 during a OKC/GS Western Conference Finals. What’s crazy is we can now look back and say that perhaps it was this game that would go on to change the landscape of the NBA forever. This was the game the OKC Thunder had to have after getting out to a 3-1 lead, and who knows, if OKC doesn’t blow this game and wins this series, do they go on to win the title? Does Durant then stay in OKC? We obviously had no idea of the implications at the time, but looking back it really makes you shake your damn head at the Thunder. This game was close essentially the entire way. Through the first three quarters OKC never won a quarter by more than 3 points, and eventually that added up to a 8 points lead heading into the final 12 minutes. They had a 101-99 lead with 2:21 to go. You were so close you bastards.

The reason GS pulled out this win to tie the series at 3-3 and then ultimately win in Game 7? Steph Curry and Klay fucking Thompson went bananas.

An absolutely ridiculous. Klay finished with 41 points on 13-31 shooting, while going 11-18 from deep. ELEVEN OF EIGHTEEN!! Curry had a nice little 31/10/9 with 6 3PM. The Splash brothers lived up to their name by combining for 17 of the 21 made GS threes. The fact that they only won by 7, mostly due to a OKC fourth quarter collapse in which they only scored 18 points, is pretty wild especially when your opposition only goes 3-23 from deep. But this was one of those moments where we were all reminded just how good a 73-9 team could be, and that it was GS that was the defending champs, and the champs aren’t dead until you truly beat them four times.

Which brings me to our current situation. The Warriors are again down 3-2 heading into a Game 6 in the WCF. They are once again the defending champs. Hell even Kevin Durant is involved again. Would anyone actually be surprised if the Warriors come out and make 20+ threes tomorrow? So far this series Klay and Steph are averaging 3.0 3PM a night. Last time Steph was in Oracle he made 11 threes in two games. Klay made 10. It just feels like any time we want to even entertain the idea of these Warriors finally being dead, they come out and remind us how stupid that is to do. I’m curious to see if guys like PJ Tucker and Trevor Ariza will be able to keep up their impressive defense for a third game in a row, and if the Rockets will be able to withstand the first few times Oracle goes crazy one Steph/Klay make a couple in a row.

The good news is that even if the Warriors do come back and win this series, there is ZERO chance of James Harden leaving HOU to join them. So in that regard we may not have a NBA altering result on Saturday night, but if history tells us anything we’re about to get a goddamn show.