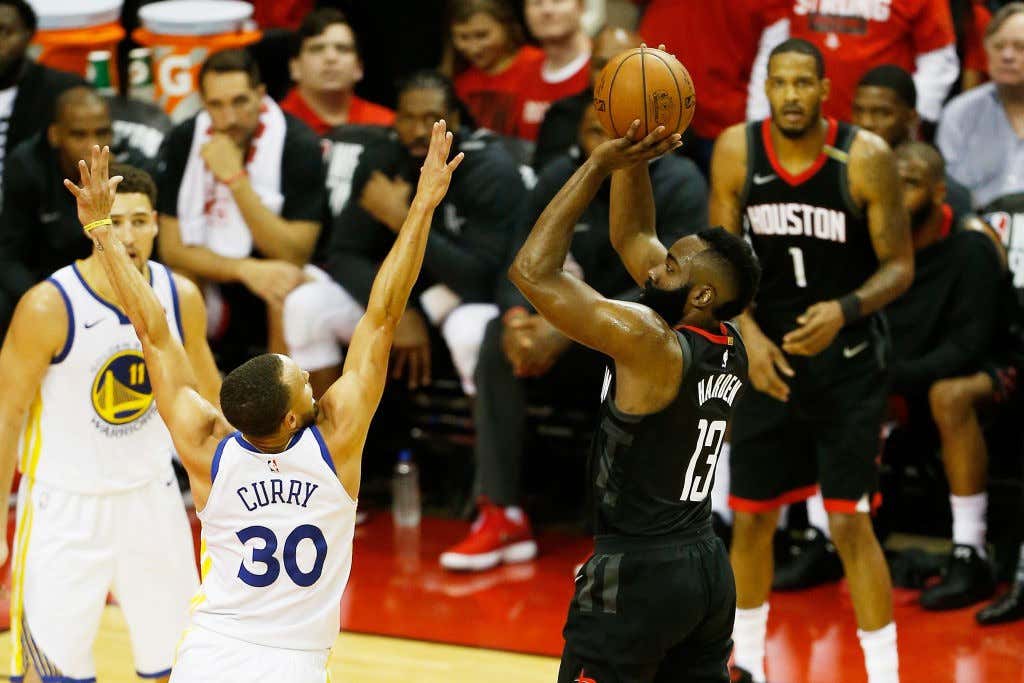 Happy Friday everybody and welcome to another edition of Last Night In The NBA where we catch you up on everything that went down from the night before in the Association. Hopefully you’re already done with work for the week, enjoying the first day of the long weekend, but if you’re a stoolie who is stuck in the cube for one more day, I am here for you. I will help you kill some time and get through whatever bullshit your boss gave you while they also took today off. We had a great basketball game last night, so let’s talk about it. If you got busy and couldn’t watch, here’s what happened

Sometimes in the playoffs you have to win ugly. At this point, this deep into a Conference Finals, it really doesn’t matter how you get the win, as long as you get it. With the Rockets returning home with the momentum and an opportunity to really put the pressure on GS, you could say this game was far more important for them. A situation like this was why they played well all year, so that if the opportunity presented itself to take a step in knocking the Warriors off, they’d be ready. As we’ve seen this playoffs home court matters, and even though the Warriors had won in HOU earlier this series, it’s still an extremely tough place for visiting teams to win.

If the Rockets were going to pull this win out, they were going to have to get big nights from their stars, or so we thought. In terms of production the Rockets Big 3 showed up, with Paul/Harden/Gordon all combining for 63 of the 98 points. The problem was they weren’t the most efficient, so even though the point totals were there, they never really could pull away

Harden really struggled, going 0-11 from deep, and really he’s 0 for his last 20 from behind the arc. Add in his 6 TOs and it would be fair to say that Harden kinda stunk in what was the biggest game of the season. What makes him so relentless though is he keeps coming at you despite his offensive struggles. This style led to some big fourth quarter free throws and he was able to exploit the lazy reaching defense of GS. The same was sort of true with Gordon as well. He didn’t shoot well from deep either (3-10), but he was able to bait the Warriors into some silly fouls, and had a big fourth quarter with 10 of his 24 points. Gordon didn’t miss a shot over his final 11 minutes, and that was really the difference in the game. When the Rockets actually get their guys to show up, we see how tough they are to beat.

But as we know, it sure looks like Chris Paul really fucked up his hammy. The line for Game 6 is already GS -10.5, so this is Vegas’ way of telling us they don’t think Paul is going to play on Saturday. I look at it like this, Jaylen Brown pulled his hammy and there was no way he was going to be ready to play an NBA game 2 days later. He’s 21. Chris Paul is 33, and while he’s a maniac, there’s no way he’s close to 100% by this weekend. That’s a BRUTAL loss for the Rockets, but who knows, maybe Eric Gordon can step up as a playmaker and pick up some of the slack. The Rockets have won games without CP3 in the lineup before, granted it wasn’t against a team like the Warriors, on the road in a hostile environment. I’m still holding out hope they pump him full of HGH and we see him out there. This series is now too close to have this ruin everything.

For GS, you’re probably kicking yourself right now. It’s sort of weird that one of the best high pressure late game executing teams in the league has now gone back to back games losing right at the end. It’s something we are not used to seeing, and I’m sure they are not used to experiencing.

I mean what the hell was Kerr doing going with Quinn Cook late, and not only that, but allowing him to take big shots in key moments? I get trusting your own guys, but I can think of some other guys I’d rather want shooting. Now, for the first time in years, the Warriors are at a real risk of missing the NBA Finals. The team we all just assumed back in October would win the whole damn thing may not even make it to the final round.

In this game, they had the same issues as HOU in that they got point production from their three best players with Durant/Curry/Thompson combining for 74 points, but they were in no way efficient. Durant went 8-22, Curry 8-17, and what this did was allow HOU to get by on their own poor shooting while still keeping things within a couple possessions

I guess if you’re GS you look at this series and think “OK, we played well enough to win, we just didn’t close it out”. It wasn’t as if the Warriors were blown out in both of these games. Now they return home to their own floor to try and keep their season alive. Maybe you’ve noticed but GS is pretty damn good in their own building. If they’re going to keep this series going, they are going to have to get back to what makes them the Warriors, Another game with not a lot of ball movement, just 18 assists on their 32 baskets, when they do nothing but play isolation basketball and turn it over a shit ton, like they did in Game 5, they become somewhat mortal. Add in the fact that they got a total of FOUR points from their bench, and they are lucky this was even a close game to begin with.

We’re now seeing that even though he’s sneaky old, Andre Iguodala is pretty important to what the Warriors do on both ends. They haven’t looked like themselves with Kevon Looney in the lineup, and it wouldn’t shock me if Iggy is back for Game 6. Now nobody should feel bad for GS, they still have 2 MVPs and 2 All Stars in the lineup so it’s a little lame to all the sudden say Iggy is the reason they can’t win, but it is a noticeable absence. For whatever reason this team looks tired once it gets to the fourth quarter, this time they only scored 22 points on 41/37% splits. Durant was especially brutal, going 0-4 in his 9 fourth quarter minutes. He’s had a pretty awful last two fourth quarters, which again feels weird because we almost never see it.

The good news is after what looked like it was going to be a quick series, where both teams were just blowing each other out left and right, there was nervousness at least on my part that this highly anticipated series would be a dud. Boy was I wrong, thank God. Instead we got the heavyweight slugfest we all wanted, and we’re in store for a pretty dramatic ending either way. Either the Rockets will finally dethrone the champs, or the Warriors are somehow going to come back from down 3-2 to make their fourth straight Finals. Let’s fucking go.

And you’re now all caught up with everything that went down last night in the NBA! We’re back tonight with a decisive Game 6 in CLE/BOS, hopefully we see Lebron’s season end tonight. Enough is enough already. As always you can check back here tomorrow for the regularly scheduled Celtics blog. MDW be damned.