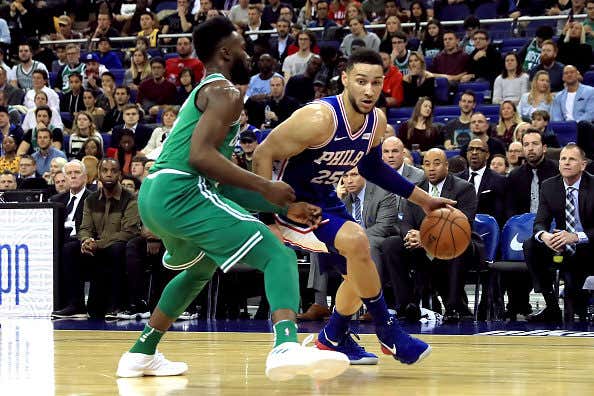 Right now it’s the Celtics, but that can change. Remember the Sixers do have the ability to make a splash in free agency this offseason plus still have 2 first round picks – including one at No. 10. There’s a chance that the Sixers could end up with a brighter future depending how that pans out. But, if you’re looking at the core right now, I like the Celtics core better, especially when you get Kyrie and Hayward back. This is a question that will be better answered after July though and even possibly during the season once we see who the Sixers take at 10 and how he plays.

They’d be up there, considering this Nova team is one of the best we’ve seen. According to KenPom (dates back to 2002) they have the fourth best numbers behind 2002 Duke, 2008 Kansas and 2015 Kentucky. Now throw in that they had some injuries and when they were at full strength just didn’t lose, yeah, I’m willing to put them in the best category that we’ve seen. Now, if they return everyone? You have to take away some of the incoming recruits because of scholarship numbers, but, yeah there would be a couple of preseason articles about if this is the best team ever. Returning the NPOY, an All-American on the wing and that depth, it’s not crazy.

I don’t think Danny Manning’s job is necessarily do or die this year. He has a decent recruiting class coming in and did make the First Four two years ago. He’s been able to develop some players, but now, yeah, he does need to put it all together. Last year was a bit of a setback as they lost some players unexpectedly and the same happened this offseason – most notably Doral Moore. But, if he can continue to compete, especially with the recruiting class coming in, he’ll be fine.

1 – Loyola. The Missouri Valley will likely be a one-bid league again, so I’ll go with Loyola over Bradley, Illinois State and Southern Illinois. I don’t see the other one-bid league teams winning and then that leaves DePaul, Northwestern and Illinois from the major conferences. I don’t see any of them making the NCAA Tournament next year. So, yeah, just one.

Uh, well, buddy you may want to sit down with this. I don’t like your chances. I mean don’t get me wrong, I like the Kings core and think they can be okay at some point. But, when are the Kings going to jump the Warriors? That brings you to your late 30s. Then you have to worry about the teams out in the East. That brings you to early 40s perhaps. Yeah, I mean, I don’t like your chances.

There’s a good chance this can happen. The 2019 Draft is fairly weak as everyone has discussed and Jontay Porter is a really good player. He’s already a first round grade (why I’d guess he stays in the Draft), so a jump up to the top-10 isn’t abnormal. He has good size to play the five spot but can also stretch the floor with his shooting. One thing to remember here though is it’s rare to see a guy jump that many spots as it just doesn’t happen all the time.

I don’t know about contending. They’ll probably be the same way they were this past season – finishing 4th/5th but in that second tier. I don’t see them better than URI or Davidson right off the bat. Throw in that St. Joe’s loses Newkirk and Demery it’s not like they return everyone to build on that 10-8 finish in the A-10. Now, with that said, the A-10 isn’t going to be good again next year, so they should be able to rack up wins. But, as for contending, I don’t see them beating URI or Davidson.

Well, he wasn’t a top-10 player after his freshman year, so it’s not like he fell back. Also, that group in front of him is all better. At the same time Bridges showed some weaknesses that didn’t stick out as much as a freshman. There were times he struggles to create for himself, which is something that is a bit concerning for the next level. Also, he’s projected to go 11 or 12, so let’s not act like he’s falling into the 20s or something like that. It’s as simple as having 10 better prospects, who also improved a bunch of things like Bridges.