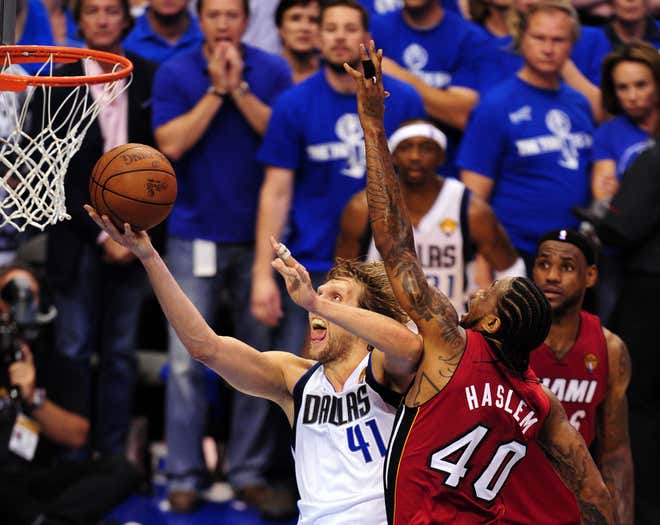 No. 7 – 2011 Finals – Dallas Mavericks 4, Miami Heat 2
MVP: Dirk Nowitzki
Notable players: Dirk Nowitzki, Jason Kidd, Tyson Chandler, Jason Terry, Shawn Marion, LeBron James, Dwyane Wade, Chris Bosh
Coaches: Erik Spoelstra (Heat), Rick Carlisle (Mavericks)
Best game: Game 4 (Mavericks won 85-83)
Biggest moment: At the end of Game 4, there were a handful of moments, so we’ll go with that ending as a whole. Dirk hit a layup with just under 15 seconds to go to push the Mavericks lead up to three. Wade came back with a dunk almost instantly and with the lead just 1 with 9 seconds to go, Jason Terry hit a couple free throws. With a chance to tie the game, Wade fumbled a pass with 6 seconds to go only for Mike Miller to airball a three at the buzzer. The Heat led the series 2-1 at the time and a win there ultimately changes everything. Instead, thanks to Dirk and Terry hitting big shots late, the series went to 2-2.
Background: This was the first season for the Heat and the Big Three. Wade/Riley were able to get LeBron and Bosh to South Beach that offseason, which ultimately led them to the No. 2 seed in the East. LeBron shut down Derrick Rose to get to the NBA Finals. On the other side, the Mavericks were the No. 3 seed who beat the No. 4 Oklahoma City Thunder to get to the Finals. Rick Carlisle put together a veteran team with Dirk, Kidd, Marion, Chandler, etc.
Historical Standpoint: From an individual standpoint, this was big for two people. This is ultimately the black mark on LeBron’s resume. This is the Finals he never should have lost and would have given him 4 Finals, with the losses all being more understandable. However, this is the one series that everyone who wants to knock LeBron can point to, especially that game 4 when he had just eight points. For Dirk, it got him his title. Dirk will always be one of the most underrated players in NBA history because he only made two Finals and won one while playing in Dallas. That said he was unbelievable in these Finals and it really altered how we view his career.
Video highlights from the series: