NOTE: There are NO SPOILERS for ‘Solo: A Star Wars Story’ in this blog.

On July 7th, 2015, Disney announced that ‘Solo: A Star Wars Story’, an anthology film about a young Han Solo set years before ‘A New Hope’, would be released worldwide on May 25th, 2018. All we knew then was that Christopher Miller and Phil Lord (the team behind ‘The Lego Movie’, ’21 Jump Street, and ’22 Jump Street’) would be directing, and that Lawrence Kasdan (the brilliant writer of ‘Empire Strikes Back’, ‘Return of the Jedi’, ‘Raiders of the Lost Ark’ and ‘The Force Awakens’ – who probably knows Han Solo better than anyone on the planet) would be writing the screenplay along with his son Jon.

At that point, ‘Revenge of the Sith’ was the last Star Wars movie to come out, over ten years prior to this announcement, and the prequels weren’t necessarily ringing endorsements for the ability to enhance our beloved characters through their origin stories, so even with a good team behind it, I wasn’t all that stoked about ‘Solo’ being in development. I was just worried. I felt – as I’ve said in dozens of blogs leading up to this one – that I saw all I needed to see of a young Han Solo in ‘A New Hope’, and wasn’t sold on another actor rocking his Corellian bloodstripes. 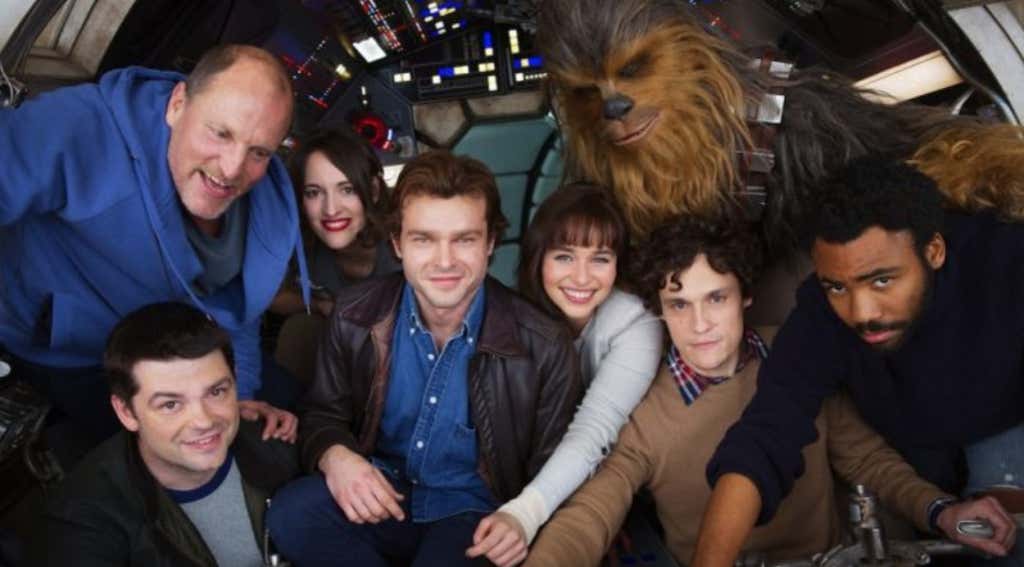 In the time between July of 2015 and last night’s premiere, many things about this film changed, but my emotions remained the same: worrisome…and for good reason. Alden Ehrenreich was cast to play our scruffy-looking nerf herder, a relative unknown. Emilia Clarke was cast to play his love interest, a notoriously not-so-great actress. Lord and Miller were fired from their directorial positions after completing a reported 95% of the film, leaving Ron Howard to step in and reshoot the majority of it. Rumors swirled about acting coaches having to be brought in, about Lucasfilm considering ‘Solo’ to be a lost cause and a bust, and about anything and everything under the twin suns of Tatooine.

I thought, sure, Donald Glover as Lando Calrissian sounds awesome, but is it going to be worth the risk of permanently damaging the pilot who completed the Kessel Run in under 12 parsecs? 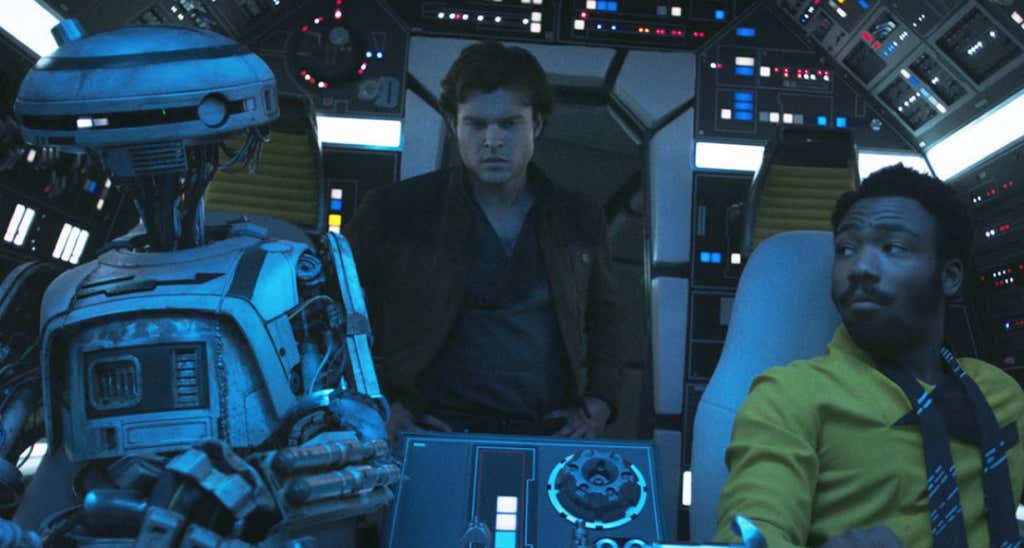 As we got closer and closer to the release of ‘Solo’, my excitement level for it never inched above baseline. Not even the fantastic trailers put together for the film made me any more eager to see it. Hell, less than 24 hours ago I literally wrote a blog headlined, ‘There’s A Star Wars Movie Coming Out Tonight And I’m Not Excited About It At All’.

It wasn’t that I thought the flick would suck, it was just that my brain auto-installed a “guilty until proven innocent” filter for everything relating to it. Probably a retroactive feature after I grew up and realized, “If you’re not with me…then you’re my enemy.” followed by “Only a Sith deals in absolutes.” was one of the worst exchanges in the history of cinema.

I bought my ticket for opening night anyway, though, because it’s Star Wars and I don’t think I’ll ever miss a Star Wars opening night for the rest of my life, and showed up ten minutes early to realize the general interest level of the public may been even lower than my own. The AMC Loews in Lincoln Square, one of New York City’s most popular theaters, was a complete ghost town.

Part of me said, “Well everyone’s probably in the theater already, it is close to showtime”, but that couldn’t have been further from the truth. Our theater was as empty as I’ve ever seen one at this particular location, having one-third of the seats filled at best by the time the trailers stopped rolling and “A long time ago in a galaxy far, far away….” hit the screen, which made for the most bizarre opening night viewing experience I’ve ever been apart of – ESPECIALLY for a Star Wars film.

‘Solo: A Star Wars Story’ started rolling regardless, and to be honest…by the time credits hit…I was kiiiiinda eagerly awaiting a ‘Solo’ sequel. Something I never thought I’d say in a million years.

We start off on Corellia, the home planet of Han (Alden Ehrenreich) and Qi’ra (Emilia Clarke), three years before the rest of the film takes place in what is basically an extended prologue sequence. This actually drags on pretty badly, and for a while, it had me in fear that my worst nightmares were becoming a reality. I wasn’t really buying Alden as Han here, and having only Clarke to play off of definitely wasn’t helping his cause, but luckily, once he meets the criminal gang of Tobias Beckett (Woody Harrelson), Val (Thandie Newton), and Rio Durant (Jon Favreau), the adventure kicks off at lightspeed and really gets going. 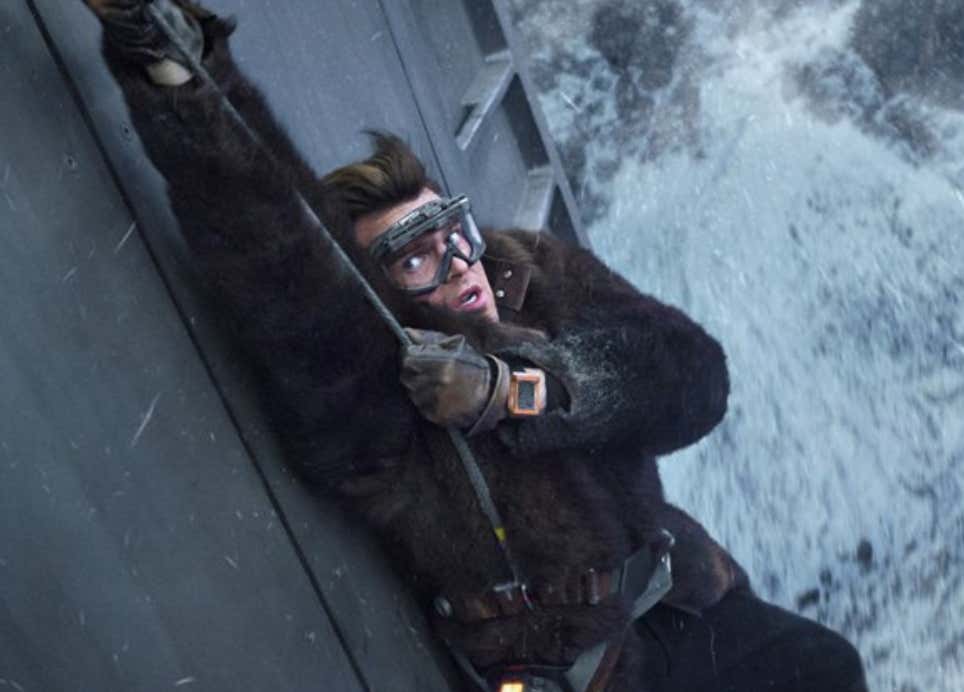 From there on, I couldn’t wipe the ear-to-ear smile off my face. From Han meeting Chewie and Lando, to receiving his now famous DL-44 blaster, to stepping into the cockpit of the Millennium Falcon for the first time, to completing the Kessel Run, this film is full of some seriously great fan service (even if some of it was ham-fisted…looking at you, lucky golden dice that were shown no less than one hundred and fifty two times) including some of the deepest pulls from lore you could ever dream up. Like ‘Rogue One’, some extremely minute details/lines of dialogue from the original trilogy were taken and made into major plot points in this spinoff, and I think that’s a really brilliant writing choice. Essentially, it’s adding another layer onto a trilogy of movies that are now forty-some-odd years old that improves the viewing experience of them all this time later, while providing this new flick with a more genuine purpose. I love that. 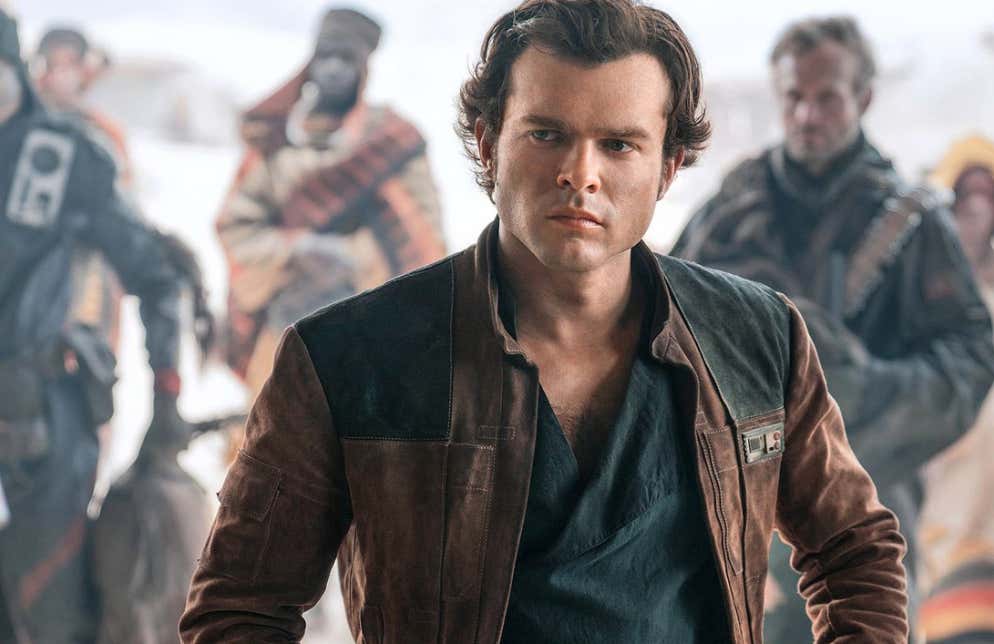 As for Ehrenreich as Solo himself, I thought he delivered a pretty respectable performance! I wouldn’t call it great, but he definitely captured more of that smuggler-charm than I thought he would and exceeded my expectations tremendously, so I’ll forgive all of the moments throughout the movie where I had to remind myself that he was Han Solo. It was a pleasure to watch him have a sort of oblivious innocence we’d never seen out of him, as well. Shoutout Kasdans for that. 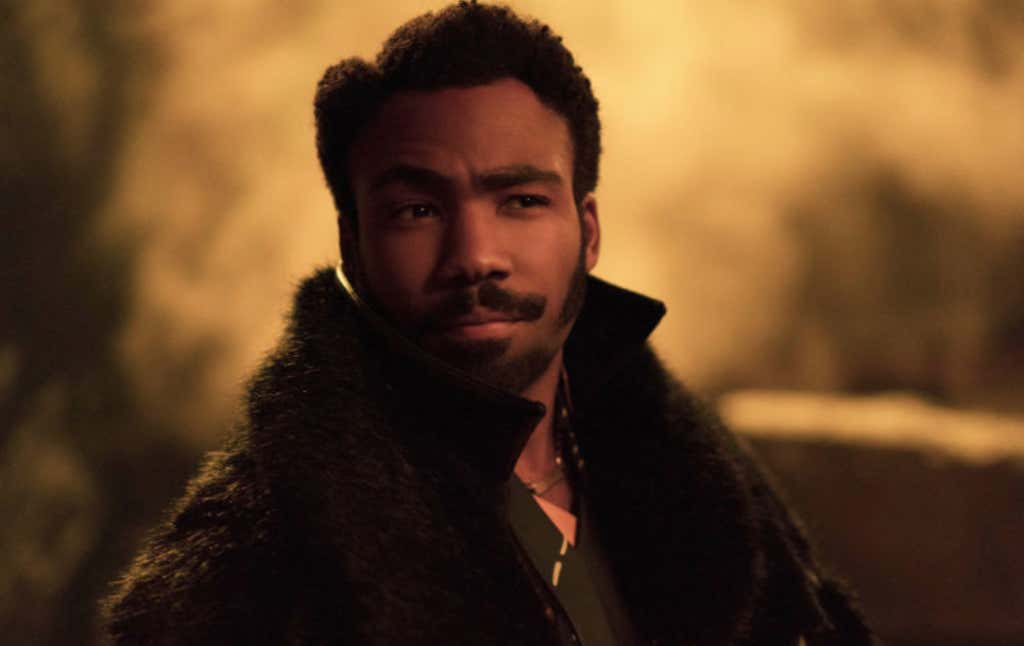 Donald Glover as Lando Calrissian, who we meet about halfway through the flick, completely steals the show and delivers the most spot-on, perfectly suave performance imaginable. At no point did I have to remind myself that he was Lando because he WAS Lando. Just as much as Billy Dee was. And his companion droid, L3-37 (El Three) played by Phoebe Waller-Bridge, gave off massive K2-SO vibes in the best way. She was really great.

Visually, this is an incredibly unique-looking movie that starts off very dark and gritty (grittier than the Star Wars universe has ever gotten, believe it or not) and slowly lightens up in color and tone as the flick advances, which I found really cool. It’s always a fine line to ride between going off the beaten path with overall designs and still making them feel familiar to the Star Wars universe, but ‘Solo’ really nailed it. John Powell’s score was pretty great as well, once again proving that while John Williams is the GOAT, he’s not completely necessary to make a Star Wars film sound like a Star Wars film.

As the flick winds down, it starts to fall apart a bit (like the Falcon does, a good visual representation of what’s happening to the plot) as things get messy and discombobulated in the same way that most heist movies do, but after the wild ride that was the second act, I almost felt like anything else was icing on the cake, and OH BOY do you get some icing in those last few minutes, as well. Jaws will hit the motherfucking floor, y’all. They probably could’ve shaved thirty minutes off the two-hour and fifteen-minute runtime though, and it would’ve made for a much better, much more cohesive movie in my opinion. 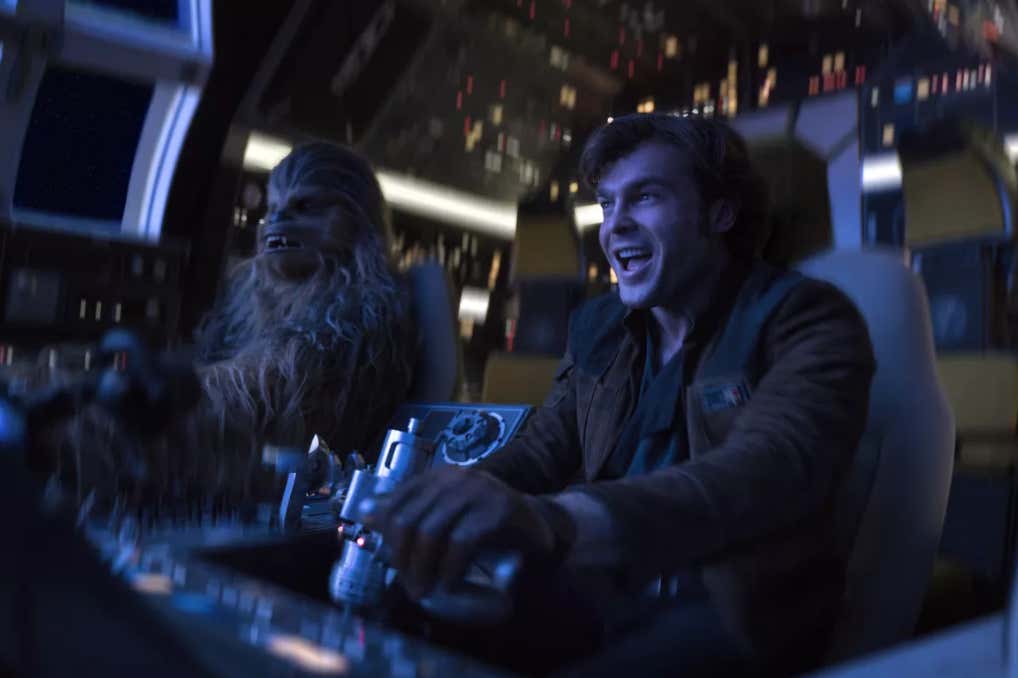 Overall, ‘Solo: A Star Wars Story’ is a really safe, enjoyable popcorn-flick that takes us through the greatest hits of Han Solo, and is best described by one of its own lines of dialogue…

“Good. Rough around the edges, but good.”

It’s not a masterpiece by any stretch of the imagination, and has some glaring flaws, but it was genuinely a blast for a Star Wars fan like myself, and the pleasant surprise I’ve so badly yearning for since July 7th, 2015. 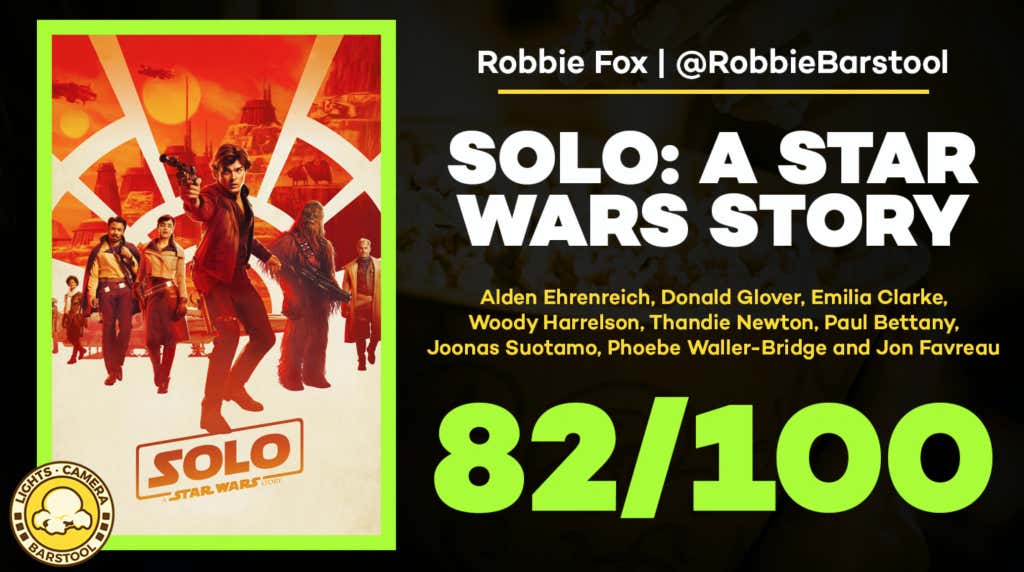 I believe after Clem, Devlin, and Fran get a chance to see the flick, we’ll re-assemble that rag-tag squad for a podcast breaking down how we felt about the movie where we’ll do a deep dive into spoiler territory, so make sure to keep your eyes and ears peeled for that all of next week.