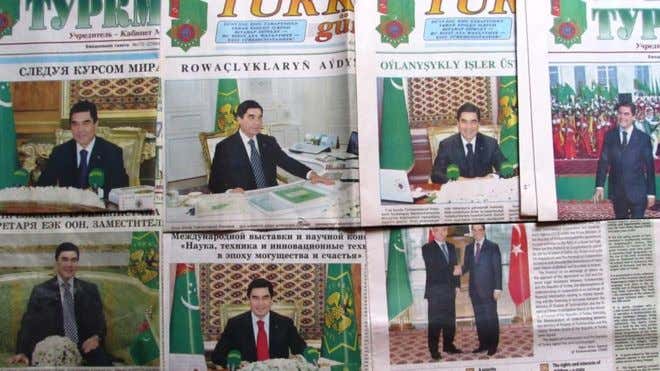 Local police in Turkmenistan are inspecting toilets for evidence that locals have been using newspapers containing photographs of President Gurbanguly Berdimuhamedov to wipe themselves, it’s been reported.

The regional police in the western region of Balkan have allegedly instructed community policing officers to check toilets in public places and private houses, and to find evidence of people using newspapers with pictures of the country’s president as tissue paper, Moscow-based news website Fergana.ru – known for its credible reporting on Turkmen affairs – reports.

Officers have been told to look for the Turkmen leader’s “soiled” pictures at landfill sites, as well as among garbage at waste collection points.

“There is a special janitor at each landfill site whose job is to inspect garbage, to look for soiled newspaper photos, to establish the house or flat of the newspaper subscriber and to report it to the police,” Fergana says.

I love how the article above says that they are inspecting the toilets. Immediately, I thought of these inspectors with black lights like that were on an episode of CSI: Turkmenistan.

“Take a look a look at this, boss. I think you’re gonna wanna see this,” he says while holding up the Daily Turkmenistan Harold.

“It appears to be just a picture of the President on a newspaper. Nothing out of the norm. Keep lookin, rook.”

The job of that special janitor should be featured on the next season of dirty jobs too. Nothing like seeing a fella give his wife and kids a hug and a kiss before heading off to another long day at the Hunting For Poop On Newspaper Clippings In the Landfill factory.

“Have a good day, honey! Use your nose, find the poopy pics, and then come home and fuck these tits!”

Happy to see they are still madly in love. Wonderful.