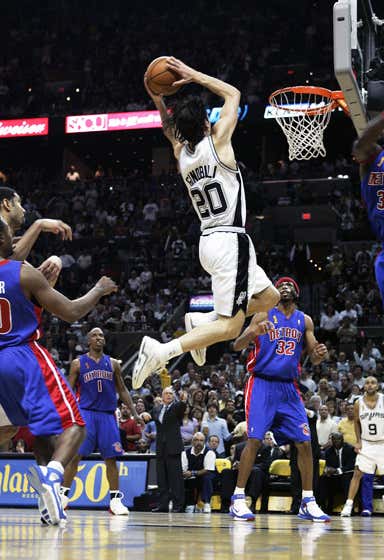 No. 8 – 2005 Finals – San Antonio Spurs 4, Detroit Pistons 3
MVP: Tim Duncan (Spurs)
Notable players: Tim Duncan, Robert Horry, Tony Parker, Manu Ginobili, Bruce Bowen, Rasheed Wallace, Ben Wallace, Chauncey Billups, Tayshaun Prince, Richard Hamilton
Coaches: Gregg Popovich (Spurs), Larry Brown (Pistons)
Best game: Game 5 (Spurs won 96-95)
Biggest moment: Could it be anything else? Big. Shot. Bob. Game 5, the Spurs down 95-93 with under 10 seconds left. Remember, Chauncey Billups missed a layup before the Spurs got the defensive rebound and called timeout. So instead of up 4, the Pistons are now down 2. Ginobili gets the inbound from Horry and as he drives left to try and create a corner 3, Horry pops to the wing where he’s left open. Manu kicks it out to Horry and, well, I think you know what happened.
Background: You had the Pistons trying to defend their title after beating the Heat 4-3 in the Eastern Conference Finals. The Spurs easily got past the Suns 4-1 in the Western Conference Finals, setting up this one. Both teams were known for their defensive ability, which is why you saw 5 games where a team didn’t score 80 points. Both teams were the No. 2 seeds in their respective conferences, beating the No. 1 seeds in the conference finals.
Historical standpoint: These were the two teams who won the last two NBA Finals, both working on setting up a ‘dynasty.’ The Spurs had won in 1999 and 2003 and a win here started to really put Duncan into that elite category, especially with three titles. The Pistons beat the Lakers 4-1 in the year prior and with this group were looking to secure another title. The lasting image of this series though is Robert Horry and hitting that game-winner in game 5. The series overall was a bit weird as you had a couple of blowouts with the Spurs winning game 1 84-69, game 2 97-76. On the flip side the Pistons won game 3 96-79 and game 4 102-71. It was a weird series in that standpoint as everyone sort of expected this to go at least 6 if not 7 games before the first four blowouts.
Video highlights from the series: