PREFACE: As I do mostly video, this was actually my first time I’ve had a blog ready to go only to  see another blogger post the same topic. I was upset for a second and then realized this is what the full-time bloggers here have to deal with on a weekly basis. It’s a blog or be re-blogged world. Nothing you can do but put your nose back to blogstone and get grinding. I agree with pretty much every thing Feits said in his blog but am still sharing this for the video at the end about how Will Smith got cast as the Fresh Prince. It’s definitely worth a watch.

Danny Gold speaks the truth. It sure feels good to hear Big Willy Style AKA WILL2K back in the booth. I pray to God he hops on the beat you hear from 0:15-0:35 in the above video because that thing is FILTHY. Now I won’t vouch for all of his past music. I think it was around the time he dropped Willennium that my 12 year old self realized I needed more angst in my hip hop, or at the very least swear words, drug references, and graphic sexual imagery. Big Willy’s sugar coated style just wasn’t doing it for me anymore and by the time Eminem dropped the lyrics

“Will Smith don’t gotta cuss in his raps to sell records
Well, I do, so fuck him and fuck you too!”

I was officially no longer “getting jiggy with it.” It didn’t help that he was releasing songs like “I Wish I Made That” where he spends the chorus just lamenting about other people’s rap songs he wish he would’ve made. Not a good look bud.

His disappearing musical career didn’t matter though because he was still putting out banger after banger at the box office. Independence Era Will Smith could do no wrong in Hollywood (except for Wild Wild West).

Unfortunately, as of late Big Willie has been suffering from a string of Ls on the big screen (After Earth, Concussion, Suicide Squad, Collateral Beauty) and the small screen (Bright. I actually enjoyed this one but it did get voted “worst movie of 2018″).

This must be why Will has decided to return to his first love, hip-hop, and I’m here for it. I’m no longer the emo kid I once was who would only settle for either conscious rap lyrics that touched upon society’s ills or ignorant rap lyrics that touched upon how to overdose on cough syrup while murdering someone. I’m finally at the age where I can sit back, relax, and appreciate Will Smith bragging about how he might marry Halle Barry AND Rhianna and has the acting chops to play both Muhammad Ali AND a white chick (which he does). So keep doing you Fresh Prince. I’m looking forward to your new music and I’m proud that you’ve finally been able to admit you may have have had something to do with your son Jaden being an asshole. 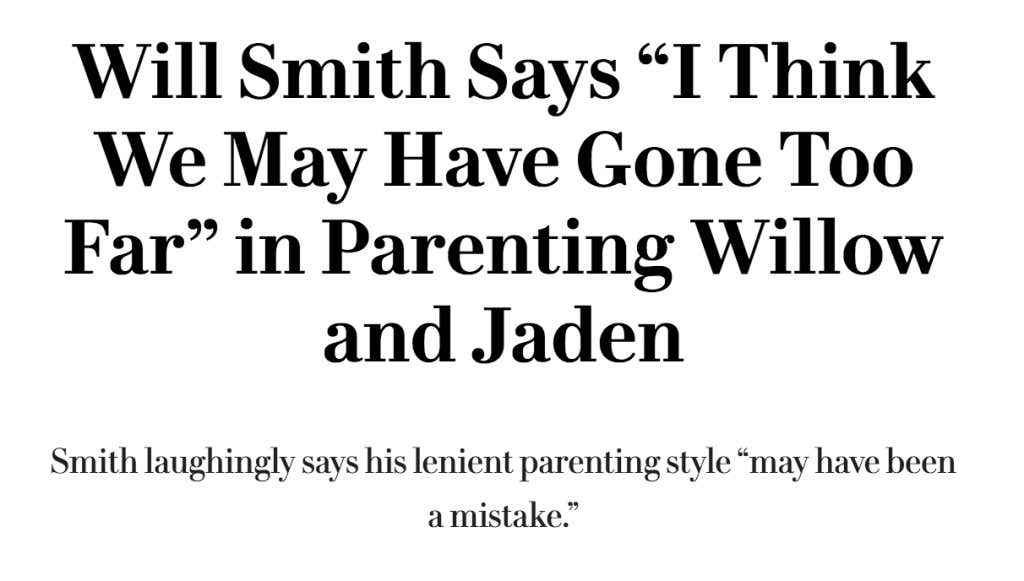 P.S. This mini documentary of Will Smith explaining how got cast as the Fresh Prince is fascinating and well worth a watch.