Last night we went to the annual Sports Business Journal Awards.   We were nominated for Breakthrough Sports Media Company so we were given a table.  The host was Mike Tirico.  It was a Who’s Who of the sports media world, featuring people such as Mike Tirico, and others.   The new head of ESPN was there but I forget his name.  Not the cokehead, the new one.  Deadspin wasn’t invited.

We knew we had no chance of winning because we are Barstool Sports.  To even be invited in the first place was a shocker.  Normally when you know you have no shot of winning you stay home to avoid embarrassment.  However Erika told us there would be an open bar and free dark chocolate mousse cake so I insisted we go, because the only thing I love more than an open bar, is an open bar combined with dark chocolate mousse cake.  Also I figured it would be a great chance to make connections and network a little bit.  Ha ha, just kidding – everyone hates our guts.  That’s the best part about Barstool.  We don’t belong at fancy award shows wearing fancy suits and fancy dresses looking for the approval of fancy people.   We did look better than anyone there, but that’s besides the point.

Long story short, we didn’t win. Like I said we didn’t expect to.  Having quite literally the second to last table in the place was the first warning sign.  I’d estimate we were a quarter mile from the stage.  We were seated even farther than where Kevin put us at his wedding, which I didn’t think was possible.   I’m also 95% sure they instructed the servers to not let us actually eat our food.   They took my salad with an entire mound of quinoa left.  They tried to take Kayce’s chicken with legitimately 3/4 of it still left on the plate.  When she said no, another one came in from the blindside and snatched it and ran at a half sprint to the kitchen to dispose of it. Those dudes were assassins.

I thought we would lose to Overwatch.  Maybe Kobe Bryant.  Small, small chance we lost to the Jumbo Shrimp.

No, it turns out we lost to the concession stand at the Atlanta Falcons’ stadium, who lowered the price of their hot dogs by $2 and saw an increase in revenue.

Yes, the $150 million company that brings joy to millions of people every day and has seen 8x revenue growth since the hire of Erika Nardini, lost the “Breakthrough” award to a stadium who slashed the price of processed beef.

To be fair, I bet cheaper hot dogs brought a ton of joy to the dozens of fans who went to Falcons home games this season.

I went to college in Atlanta and we would buy tickets for like $4.99 10 minutes before kickoff and sit at the 50 yard line.  I walked into the Celtics/Hawks Game 6 and sat courtside.  Maybe times have changed.  Maybe more fans come out for the reduced price meats.

I think it was because Arthur Blank was there while our CEO was in a t-shirt.

I’m not mad about it.  I’m actually laughing.  I didn’t want to win.  Sure I had an awesome speech prepared, but whatever.  Since when does Barstool get recognized by our peers in the industry for positive stuff?  Not my Barstool. 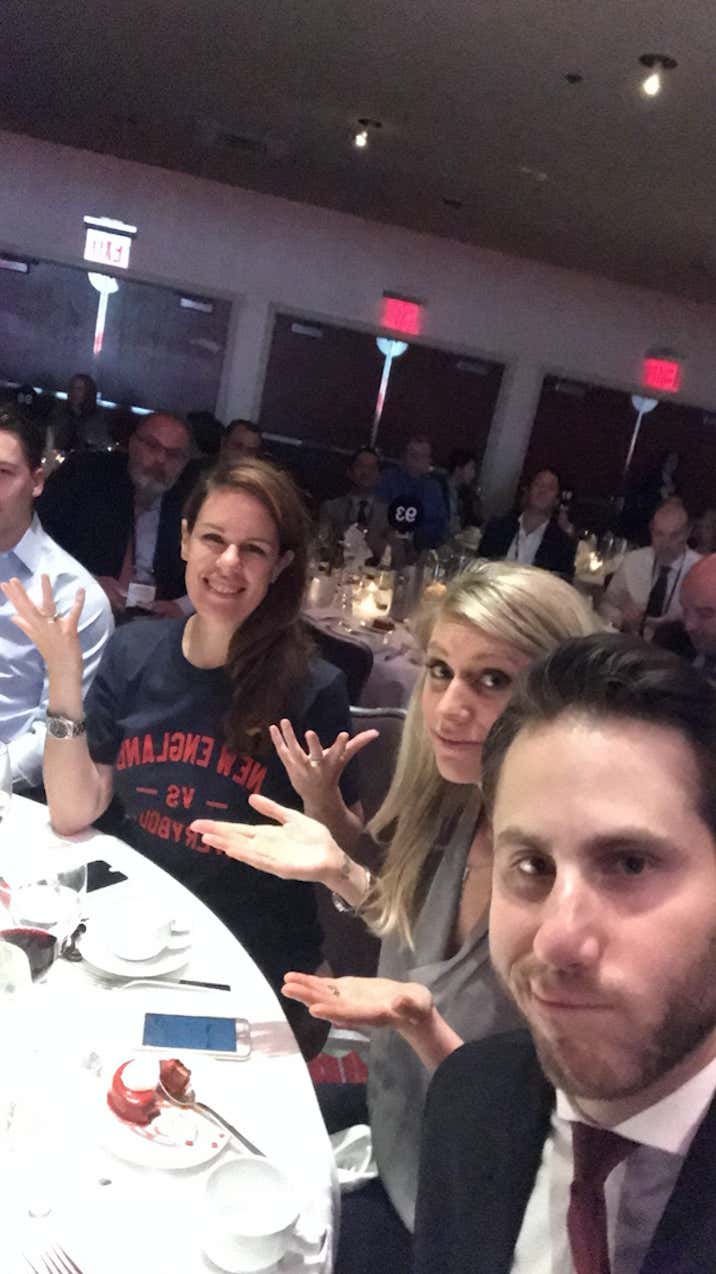 I got half a salad, overcooked chicken, a wine glass they never actually put anything in but looked nice as decor, dark chocolate mousse cake, some quality time with some of my favorite Barstool people and a sales guy, and I looked better than Feitelberg.  At the end of the day that’s all that matters.

*There wasn’t an open bar.  I spent $394 on drinks.  But I saved the receipts and I am going to expense it.