Did anyone else get chills watching that? Chills of jealousy. My graduation ceremony was a goddamn snoozefest. They said my name, I shook hands with a couple old people, and walked off stage. It was 95 degrees and I was probably the 30th kid to get named, so people were already tired of clapping. And my last name starts with E, which is towards the beginning of the alphabet, so by the time we arrived at the S kids, mothers’ makeup was melting off, dads were choking in their ties, and grandparents were checking in to hospice care.

Willie told me that black families treat graduation completely differently. It’s like church, he said. Many of these kids are the first ones in their family to graduate from college, and everyone in the theater/auditorium/arena goes bonkers the entire time. But these two kids decided to throw their own blend of sriracha and gasoline on an already-blazing inferno, and boy did they make it fun. I’m too afraid to try that split move, ever since Andy Bernard busted his scrotum on the eve of J & P’s wedding. And I certainly can’t telescope my spine like a playing card like the second guy. But everyone should try something fun when they’re getting their diploma. Right?

Have to acknowledge the incredible hugs being handed out by that guy who is probably the president of the university. He just stepped back and said, “do your thing, young blood.” 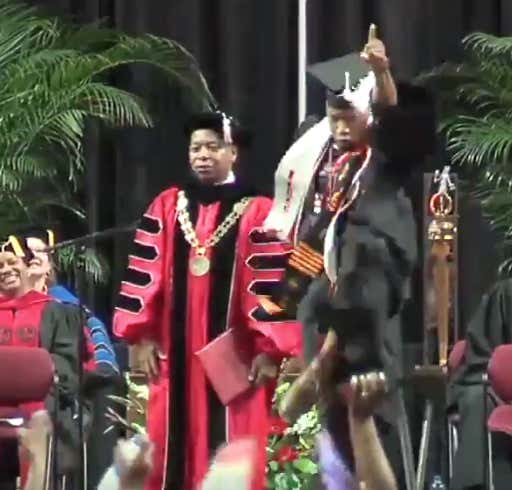 Unfortunately for this guy, he was followed by the only guy in town who can do the splits better. And the President rewarded the second guy with a way better hug. Dude looked like Roger Goodell at the draft back when players liked him.