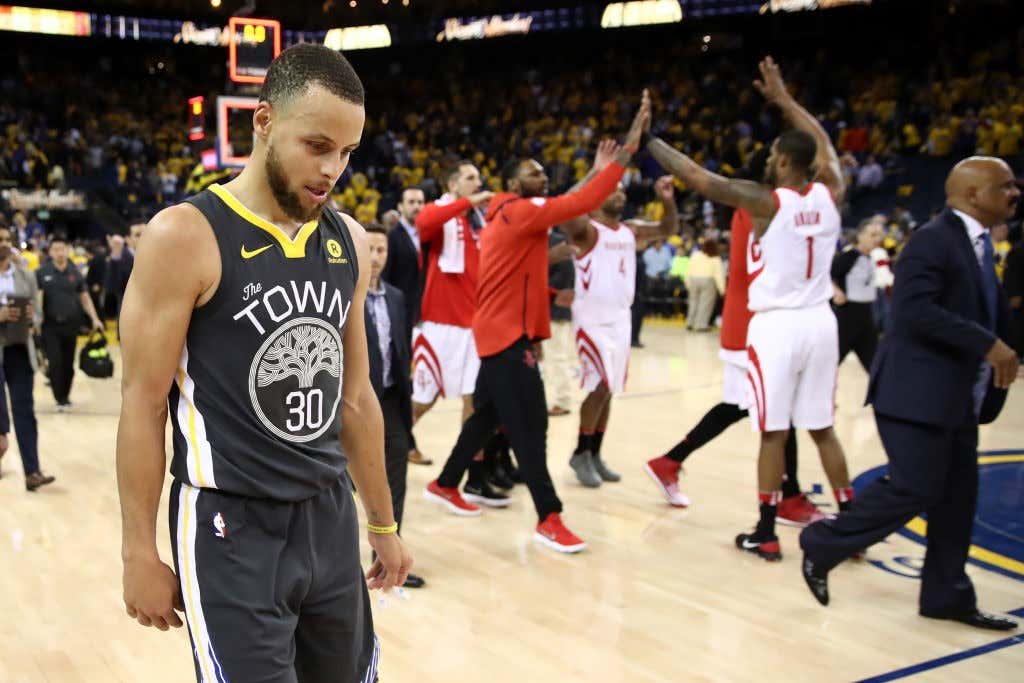 Happy Wednesday everybody and welcome back to another edition of Last Night In The NBA where we catch you up on everything that went down from the night before in the Association. To say we finally got ourselves a competitive night of basketball would be an understatement, as last night was definitely the best game of the Conference Finals for either series. It had a little bit of everything, from huge runs so super human stretches, to high pressure moments. Everything you could want in a Conference Finals playoff game, this Game 4 gave you and then some. Have no idea what I’m talking about? That’s cool, just keep reading because here’s what happened

It wasn’t supposed to happen like this. Everything we knew about this Warriors team told us that when they smelled blood in the water, and got to play at home, that it usually meant bad things for their opponent. This was a building that GS had not lost a playoff game in since 2016, and given how this game started, you know with a quick 12-0 run

it sure looked like we were heading for another Conference Finals blowout. If you thought the series was over after watching GS win by 41 in Game 3, this start certainly didn’t change your mind. But what happened next is not something any of us could have predicted. Instead of folding the Rockets punched back, hard. They won the second quarter 34-18 and ended up taking a 7 point lead into the half. Then in the second half, once again the Warriors reached a superhuman level where it did not appear the Rockets could stop them on a single possession. Curry and Durant went nuts in the third quarter, especially Curry, and all the sudden the Rockets were down 10 heading into the final quarter. So how did they end up pulling this out? Well it helps when you get great performances from your two best players. James Harden and Chris Paul put this team on their goddamn backs, and when the stakes were at their highest, they came through and then some

Especially Paul. In that decisive fourth quarter not only did Paul lead the Rockets in +/- (+13), but he also lead them in scoring and assists while playing all 12 minutes. All season we saw the Rockets play this elite level of defense, and over those final 12 minutes they took it to an even greater level. GS shot just 3-18 in the fourth, blew a 12 point lead and Curry and Durant were held to just 2-13 shooting. The Rockets were able to get the Warriors completely out of whack at the most important moment of the game, something that we certainly do not see very often. The Warriors panicked

Look the Rockets had to win ugly, and that’s perfectly fine. With just three players in double figures, and the third being Eric Gordon who went 4-14 from the field, not many teams can say they went into Oracle and pulled out a win despite shooting 39/31%. While he didn’t make a shot, the 4/16 performance from PJ Tucker was gigantic, and he was great on the boards late which was important considering the Warriors had 16 OREB and were tormenting them all night. The same goes for Capela and his 8/13. When it was all said and done the Rockets did exactly what they set out to do and that was steal one on the road. Now the entire feel of the series has shifted, and it’s the Warriors who now have all the pressure. Now they have to go into HOU, a place where the Rockets were an NBA best 34-7, and have to try and repeat what we saw in Game 1. The difference is now the Rockets have confidence, now they know they can not even play their best and still beat this Warriors team. Something not a lot of teams can say.

For GS, I imagine the team and their fanbase will try and deflect the fact that this was a blown opportunity, and that the Warriors now face real pressure for the first time in a long time. But the reality is, even though Curry and Durrant and Draymond were pretty ridiculous

The thing is, the Warriors didn’t really look like themselves at times. They only had 14 assists on their 35 makes, and I can’t remember a time they basically never took FTs. Especially at home. You add in the 16 TOs which lead to 20 Rockets points, and it all becomes a little more clear. Poor shooting plus sloppy play against a 65 win team usually results in a loss. Normally the Warriors are so good they can shoot their way out of such a situation, but last night proved they are actually human just like the rest of us.

And honestly, I have to question their shot selection in that fourth quarter. You had Durant hitting the side of the backboard, Curry missing layups, and it’s never good when you have more TOs than actual FGM. GS is now faced with real adversity, and they loved to talk about how this is when they are at their best, so let’s see it. Game 5 now becomes the most important game of their season now that both teams have proven they can win on the road. I’m not so sure if we’ll get another situation where two guys from both teams have over half their team’s points, but I think we can all agree that we will all take another version of what we saw last night.

In my opinion, the Conference Finals needed a game like this. All these blowouts had gotten a bit boring, and finally the most hyped series of the entire season actually lived up the the billing. These were two heavyweights trading punches for 48 minutes, neither willing to accept defeat. But like we’ve seen so many times before, all it takes it one bad mental stretch, one possession where you lose your composure, and the entire complexion of a series can change.

And that’s it! You’re now caught up on everything that happened last night in the NBA. We’re back tonight with a pretty important Game 5 for CLE/BOS so if you excuse me I need to go try and not vomit at my desk. See everyone tomorrow for that recap.