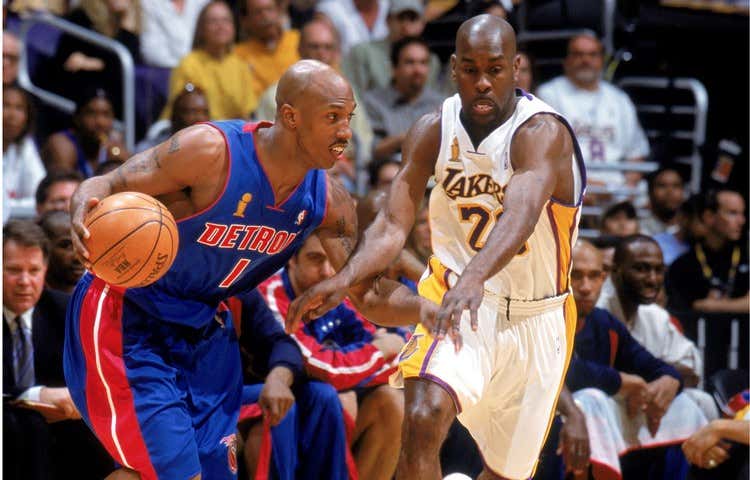 As of May 22, 2018 – the start of this countdown – we’re officially 10 days away from the NBA Finals. So with that in mind I started thinking about the best Finals since I really remember started watching the games. I was born in 1987, which basically goes in line of remembering Jordan’s first trip to Finals in 1991. So we’ll use that as our starting point. What were the 10 best NBA Finals since 1991. Each day we’ll reveal one as we countdown to No. 1 on the start of the NBA Finals.
No. 10 – 2008

No. 9 – 2004 Finals – Detroit Pistons 4, Los Angeles Lakers 1
MVP: Chauncey Billups (Pistons)
Notable players: Chauncey Billups, Tayshaun Prince, Ben Wallace, Rasheed Wallace, Rip Hamilton, Kobe Bryant, Shaq, Derek Fisher
Coaches: Larry Brown (Pistons), Phil Jackson (Lakers)
Best game: Game 2 (Lakers won 99-91 in OT)
Biggest moment: It was all of Game 1 for me. The Pistons came out with a defensive strategy that was a bit different. They knew that someone else had to help out Shaq and Kobe in order to beat them and the Pistons defense clamped down on everyone else. Kobe and Shaq combined for 59 points. That sounds great and all, but the problem is the rest of the team combined for just 16 points. Getting the win on the road really set the tone for the series. I’ll always remember the Lakers just struggling to get anything going.
Background: Arguably the biggest upset of the era, the Lakers were made to run through the NBA that year. They had Shaq and Kobe, but also brought in guys like Karl Malone and Gary Payton, who were chasing a ring late in their career. Combined with those guys were staples like Luke Walton, Rick Fox, Devan George and Derek Fisher. It would end up being the last time we saw Kobe and Shaq together as Shaq forced his way to Miami that offseason. As for Detroit it looked like they were ready to start a mini-dynasty out of the Eastern Conference. They had the core of the starting five and did end up making the Finals the next year as well.
Historical standpoint: As I mentioned, this was the last time we saw Shaq and Kobe play together. Ultimately with Shaq heading to Miami there was a dramatic shift in the NBA. We saw the Lakers take a step back for a couple of years until they were able to go out and get Pau Gasol – which sent Marc Gasol to Memphis. The Heat ended up winning a title in 2006 with Shaq and Wade leading the way. As for Detroit, they ended up keeping the core together for another run in 2005. However, the missed pick at No. 2 in 2003 (Darko over Bosh/Wade/Melo) ended up hurting them keeping the run last longer. These Finals will also be one of the biggest upsets of this era that we’re discussing along with the Mavs over the Heat.
Video highlights from the series: