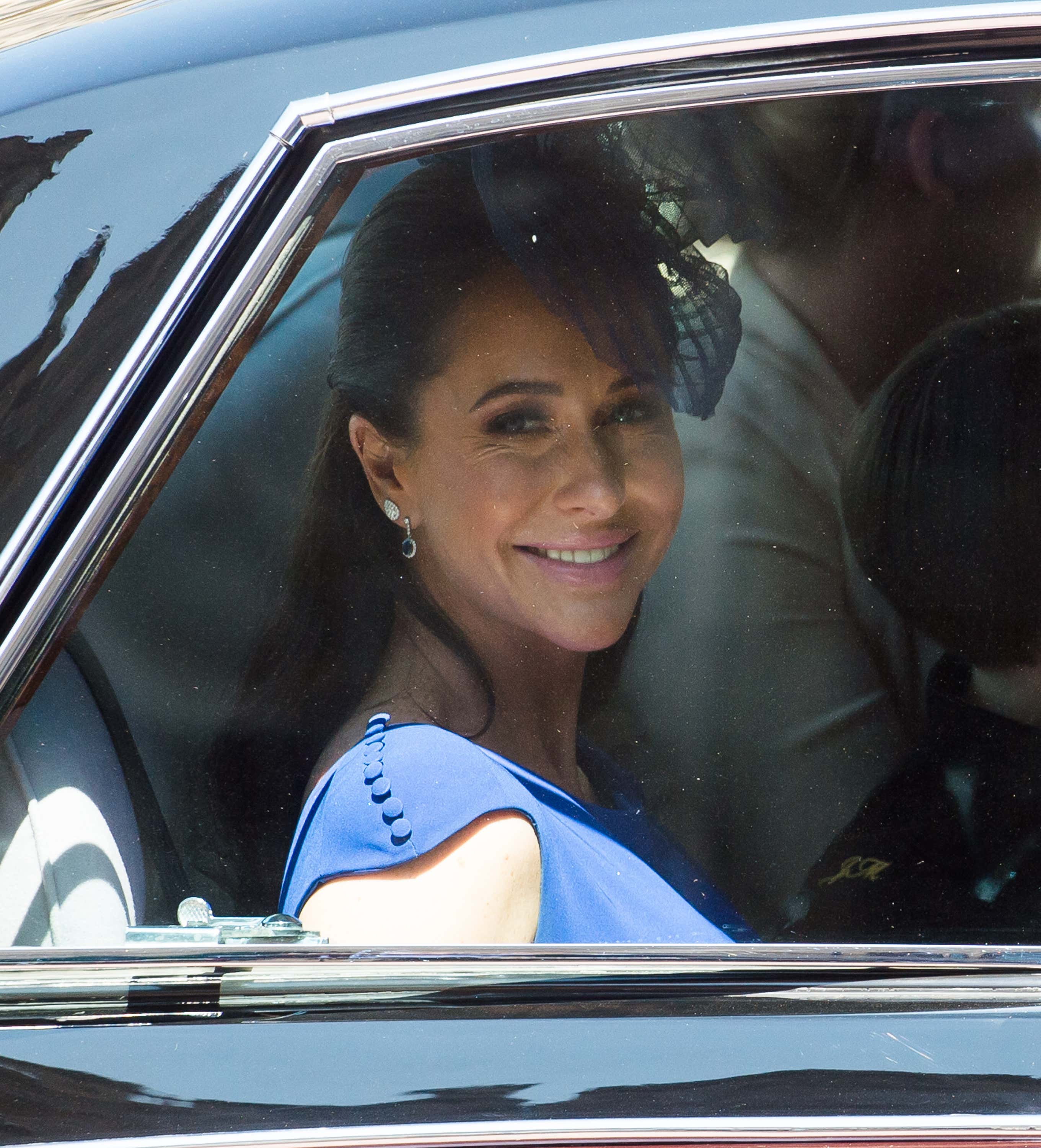 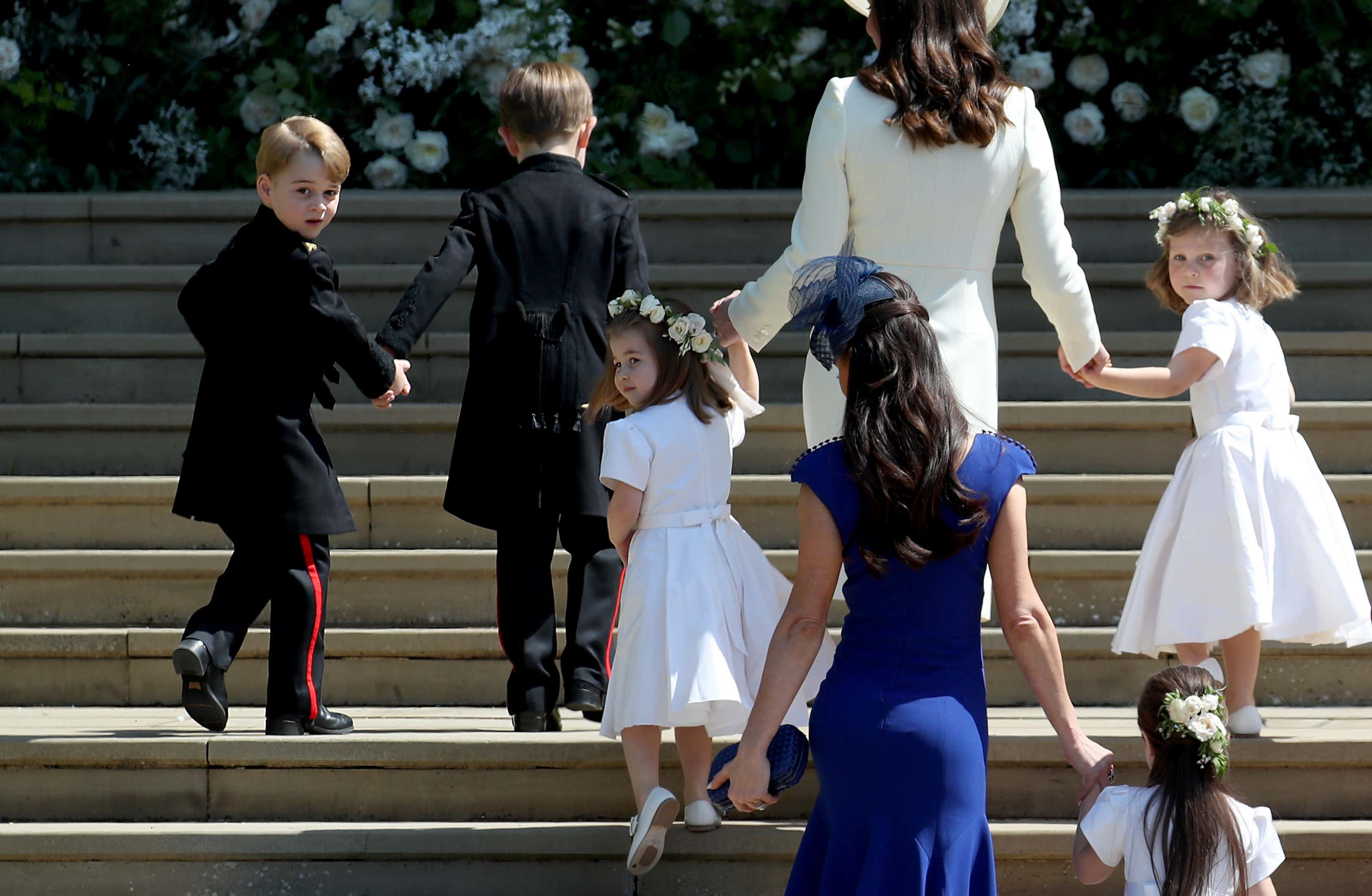 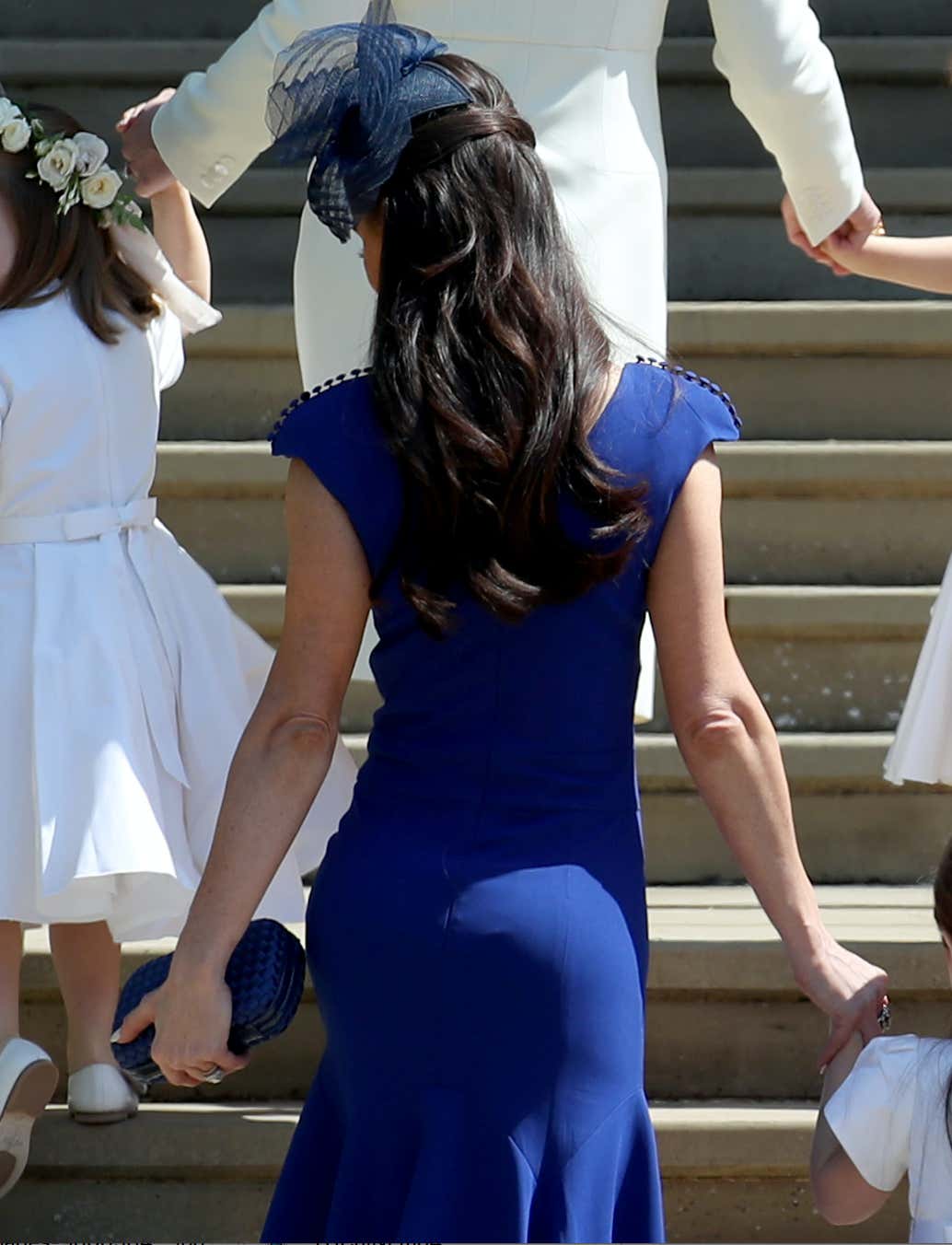 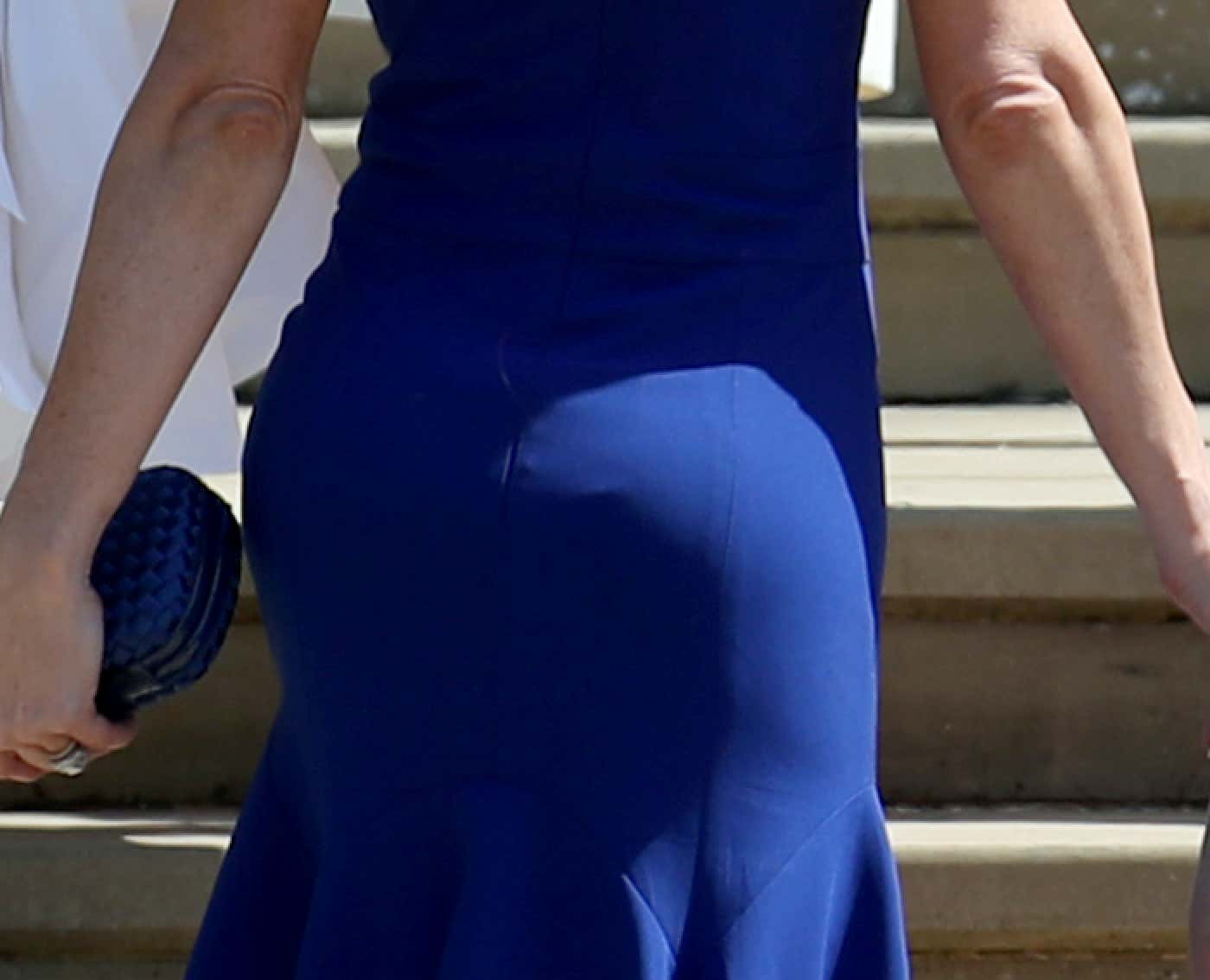 Page 6 – The internet has been abuzz about Jessica Mulroney’s “Pippa moment” at the royal wedding — and insiders claim it was a calculated move to promote herself.

Meghan Markle’s best friend was said to be inspired by Pippa Middleton, who became a sensation when she was photographed from behind at the 2011 wedding of her sister Kate to Prince William. Mulroney stole the show Saturday when she was snapped walking up the steps of St. George’s Chapel wearing a form-fitting $1,495 royal blue Di Carlo Couture dress designed specially for her.

And it seems she was already practicing her pert-posterior plan last month.

“At a Toronto gala, a prominent photographer asked Mulroney to pose. She said archly, ‘I’m going to give you some Pippa,’ and turned her back to offer a rear shot,” a friend of Markle’s told reporter Sharon Churcher.

Mulroney — who is said to be Markle’s behind-the-scenes style adviser and who reportedly had a hand in planning the wedding — has a lot to gain from her friendship with the new duchess of Sussex.

Girl you workin with some ass, yeah! You bad, yeah! Make a Royal spend his cash, yeah, his last, yeah! Hoes frown when you pass, yeah, they mad, yeah!

Jessica Mulroney tryna go viral with those cheeks and be Pippa 2.0. Can’t knock the hustle! Every chick – even normal ones in normal social situations – make sure that ass pops. And thats just because they’re worried about impressing boys or making an ex jealous or simply making sure they get likes on Instagram. Now imagine you take a regular girl – no royal blood or anything – and you put her in a situation where TWO BILLION people worldwide are gonna be watching. Of course she’s thinking next level. Hit them motherfuckin angles! Go viral with that ass and get yourself your own Prince. Land a reality TV show. Maybe become a model. Shit, just to rack up the followers. That wedding may have been in England but our girl Jessica is a red blooded American from the land of opportunity and in her eyes this was her break. She probably put up with years of her friend complaining about her Royal ass boyfriend. A shoulder to cry on every time pictures surfaced of Harry wearing nothing but cocaine with some hoes in Vegas. Listening to Meghan moan about that old bitch The Queen. This was her chance to cash in on all that nonsense.

And she’s going viral with that ass when she doesnt even really have an ass. I mean dont get me wrong shes an attractive girl. She’s got a nice figure. But in the year 2018…in the world of Instagram…in an era where even white women have evolved…there’s ass EVERYWHERE. A+ butts everywhere you look. The competition in the ass department is more cutthroat than its ever been. Almost anywhere else in the world (Maybe not in Asia) nobody even looks twice at this ass. BUTT, this is England. The whitest place on God’s Green Earth. The land of flat asses and yellow teeth. If you’ve got even the slightest curves, you’ve basically got a Buckingham Badonk. I mean Pippa Middleton went viral worldwide at the last Royal wedding for her ass. Do you remember that? Do you want a refresher? THIS is the ass that apparently captivated all of England and was talked about worldwide: 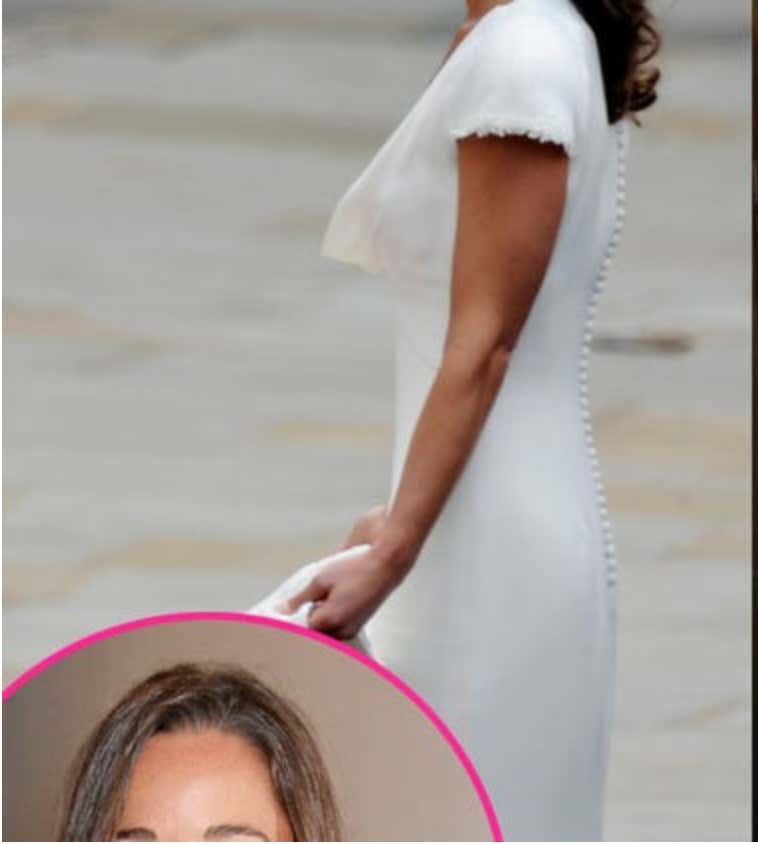 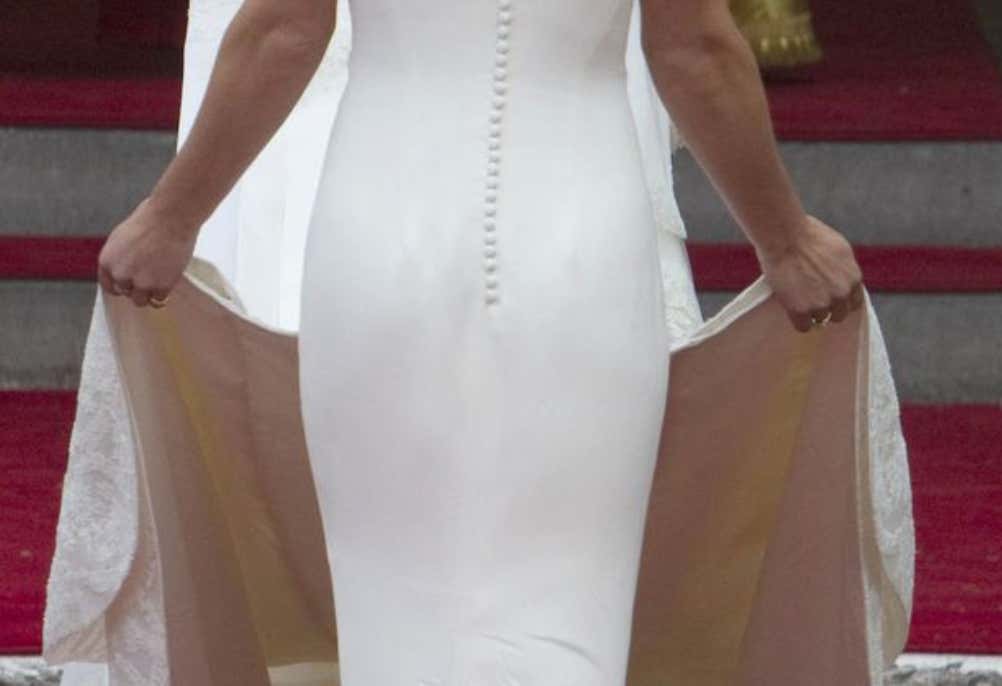 That ass is quite literally non existent. If that thing can make you into a household name, anybody with any humps should shoot their shot. Arch that back, look back at it and pray that money somehow rolls in, girl.