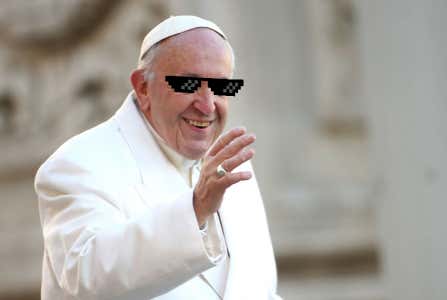 Source - Pope Francis’ reported comments to a gay man that “God made you like this” have been embraced by the LGBT community as another sign of Francis’ desire to make gay people feel welcomed and loved in the Catholic Church.

The Vatican declined to confirm or deny the remarks in keeping with its policy not to comment on the pope’s private conversations. The comments first were reported by Spain’s El Pais newspaper.

Whether or not the pope intended to break ground, there was a time when the Catholic Church taught that sexual orientation was not something people choose.

Francis DeBernardo, executive director of New Ways Ministry, which advocates for equality for LGBT Catholics, said the pope’s comments were “tremendous” and would do a lot of good.

The Rev. James Martin, a Jesuit whose book “Building a Bridge” called for the church to find new pastoral ways of ministering to gays, noted that the pope’s comments were in a private conversation, not a public pronouncement or document. But Martin said they were nevertheless significant, particularly given the original version of the Catechism.

I know what you’re thinking. You think that I’m going sit here and say that the Internet is giving the Pope too much credit. That he’s light years behind the rest of the world and everyone and their mother knows that being gay isn’t a choice. That for some reason religions are able to get away with preaching outdated, archaic views of the world with zero consequence. Well guess what? I’m not. Why? Because Pope Francis telling gays to ignore the haters may be my favorite quote of all time. Right next to Mike Tyson’s, “fuck it, it’s a fight.”

Granted, it’s easier said than done. I’m sure the Pope has never had to deal with the comment section after writing a blog on a trans wrestler from Texas. Then again, I’ve never seen his DM’s, he could be a hater magnet. Regardless, it’s some pretty cool advice from the Pontiff. Especially, considering he was (allegedly) giving it to LGBT people; a rarity for a religious figure. So it’s not surprising that every news outlet on the planet picked it up.

Which is all well and good. I just wish that the Pope would do more. Project Love, Simon on the side of the Vatican. Marry two of those closeted cardinals you have prancing around the rectory. Quote tweet a Lady Gaga song with the hashtag #bornthisway. Private, off the record (alleged) conversations aren’t enough, Fran. Grow some balls and make a real statement. What’s the worst that could happen? God gets mad at you? It’s not like he’s going to do anything, you’re the Pope. So I’ll take your advice this time, but next time I’m expecting more. I’m going to end this blog with something Rone said to me when I first started which I think fits well with this story. “If you ain’t got no haters, you ain’t popping.” -Rone, – The Pope.