You clicked on the blog, now answer the fucking question.

And you can pretend that you have no clue, but everyone should know the answer to this.

I think for the average adult… Whether you identify as a man or woman… The answer would either be a finger (or two) or perhaps a cock (or two).

I'm betting that finger probably was either your own, or a doctor’s, or maybe a camp counselor.

For the average child, the answer to that same question would probably be a rectal thermometer… Unless, of course, that child was unlucky enough to be an altar server. In which case, there's an unfortunate (but slim) chance the answer changes back to that of an average adult.

So now that we’ve established WHAT is the longest thing that’s been shoved up your ass, here’s a more difficult question to answer:

Exactly HOW LONG was the longest thing that was shoved up your ass?

Fingers are like snowflakes and dicks are just as randomly sized.

So whereas the first question was easy to answer, that second one is a whole other kettle of fish.

But not for me.

I know the exact answer to both Question 1 AND Question 2.

Answer 1: The longest thing I have ever have shoved up my ass is a colonoscope.  And it’s happened 6 times with 4 different doctors (3 male and 1 female), and in 3 different states (NY, NJ, and my juicy peach was also probed just outside of Atalanta, GA).

Answer 2: That violating scope is exactly 1500 millimeters long, which means I have had just over 59 inches (or just under 5 feet) of camera snaking my toilet at one time or another.

During those six colonoscopies, I have had DOZENS of benign polyps removed… Two of which were made into my favorite pair of cuff links and another two that were made into a pair of tasteful earrings that my weirdo wife refuses to wear.

I won’t go any further into the process except to say 3 things:

A gorgeous young Russian broad walks into a doctor’s office complaining about severe pain in her rectal area.

The doctor says, “Where exactly in that area does it hurt most?”

And she sheepishly replies, “Right by the entrance.”

To which the doctor immediately answers back, “Since you referred to it as an ‘entrance’ and not an ‘exit’ I think I have a pretty good idea where the pain is coming from.”

And he wrote her a prescription for lube.

So why did I ask this question, and then use the answer as a ham-handed segway into colonoscopy talk?

Because I saw this billboard the other day… 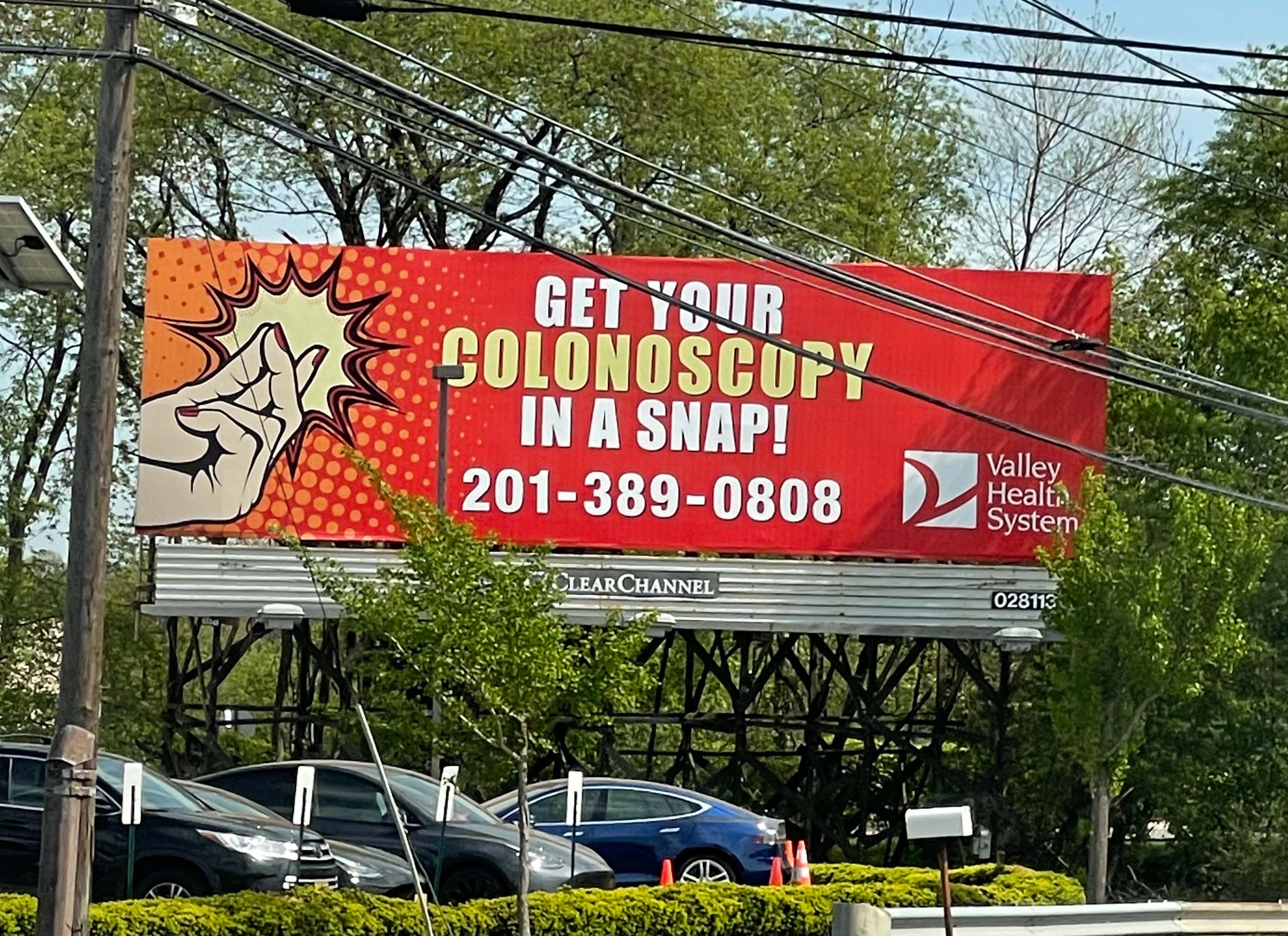 Now, for anyone planning on having OR anyone who has had a colonoscopy, I think you should take immediate umbrage with the Valley Medical Group using the image of non-lubricated fingers (with seemingly sharp fingernails) in front of a formerly-puckered-but-now-gaping-yellow-asshole.

I said I wasn't going to go further into the process… I lied.

The reason that the obvious graphic of a snap plastered on that billboard resembles something much more sinister to me and other colonoscopies-getters is because the colonoscopy is a very sensitive procedure that is arguably more violating than any other operation a person may go through in their life.

I mentioned that the camera shoved up my ass was less than an inch shy of six feet long.

And yet that camera didn't enter between my toes and then take a straight shot up to the base of my skull.

Instead, the journey of this intricate machine started nearly halfway up my body, at my freshly shaved anus (thanks Manscape!), and then carefully traversed through this… 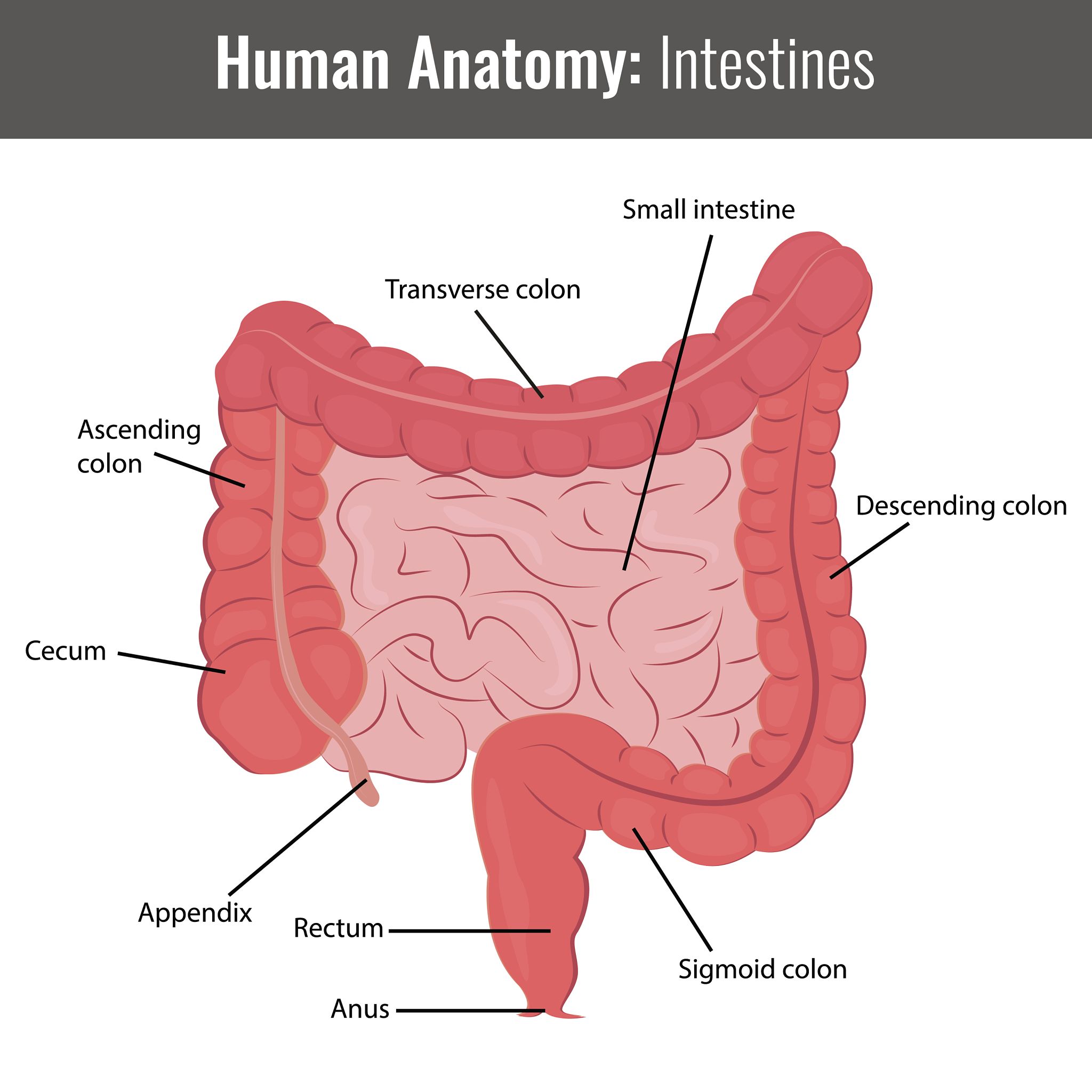 As you can see, once the doctor performing this procedure makes that first hard-right exiting my rectum and into my sigmoid colon, the rest of the journey resembles a fleshy NASCAR track… A hard-left turn onto the descending colon, another hard left onto the transverse colon, yet another left onto the home-stretch that medical professionals call the ascending colon, and then finally a little peek to the left towards the appendix.

And then, after that arduous 5-foot journey filled with twists & turns and polyps & blood, they have to reel that bitch back in without fatally rupturing anything in its path.

The drugs they give you are FANTASTIC, and the prep is better than any dump you have ever taken, BUT the process is fucking DAUNTING.  And the recovery can be painful, depending on what they find.

Therefore, I would expect a little more bedside manners AND roadside billboards from a medical group like Valley Health Systems… You had a universe of graphics to choose from for your colonoscopy ad, and you ultimately chose the one with fingers pinched in front of a hole.

You should've gone with a can of ginger ale waiting next to a warm bath. Or whatever-the-fuck this is…

This week's Twisted History is a Best Of episode because I was traveling, but if the mention of penetrated assholes has you wanting more, might I recommend you also revisit…