This was a really quick, really great interview with Los today. I cannot state this emphatic enough - go and subscribe to Red Line Radio on iTunes, Spotify, whatever and rate the show 5 stars. Please and thank you - it actually really helps us on our end with all the analytics and shit.

Last year when Oakland finished off the Sox in the 3 game wild card round, Carlos Rodon came out of the pen and surrendered this stat line:

People shit their goddamn pants about this outing and thought that appearance would be his last ever outing on the South Side while never fulfilling the potential that lead to him being the 3rd overall pick in the 2014 MLB Draft.

Not even the White Sox wanted him back at first, as he was non-tendered in early December before resigning at a cheaper rate in February

But in that playoff outing, I saw something I hadn't seen out of Carlos Rodon in a long time, maybe ever. I saw a fastball that was touching 98MPH with run and the same biting slider. It made me go, "huh... if he can tap into this for 175IP, that's legit wipe out stuff" to myself: 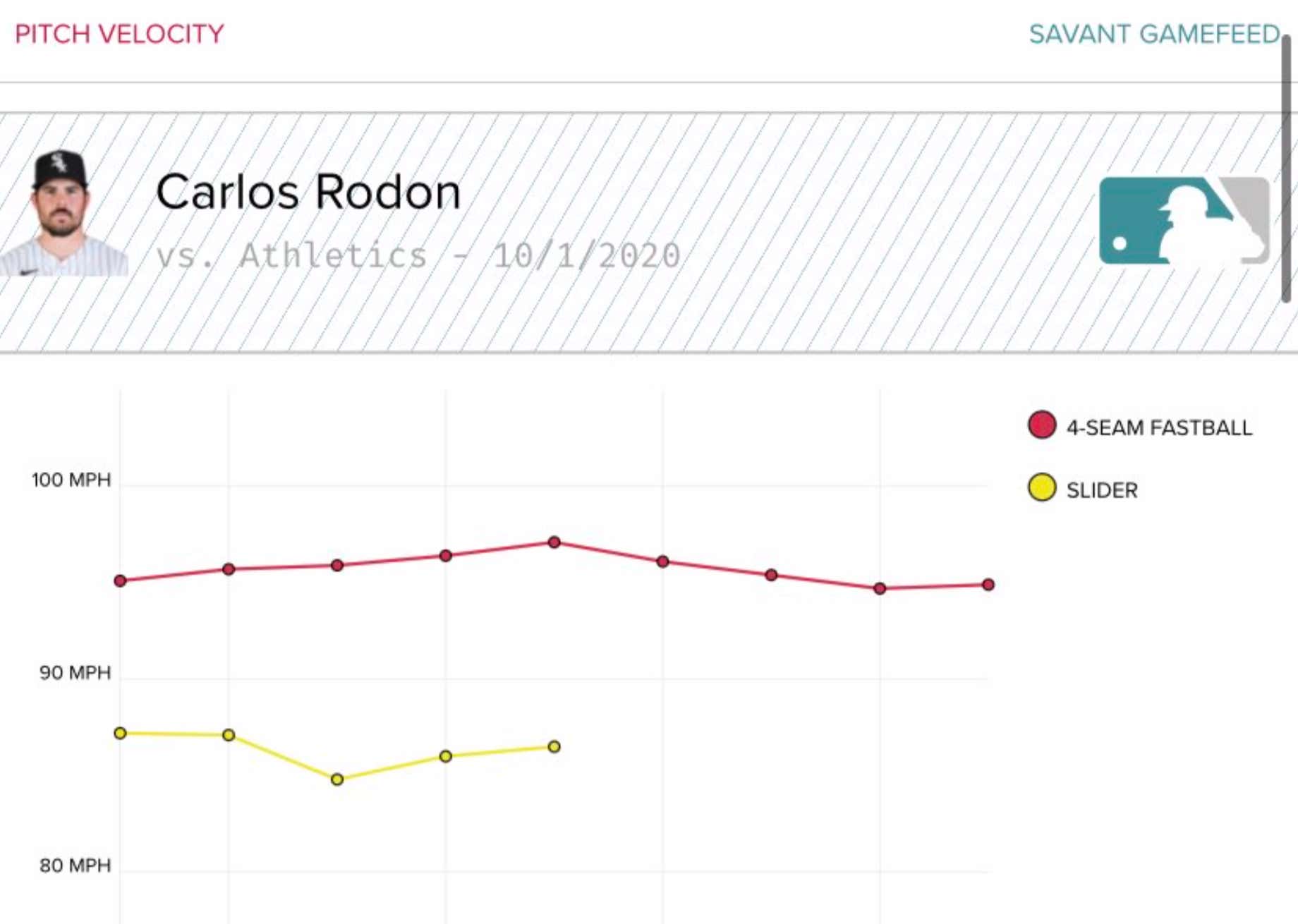 I said this to myself in spite of him being fed to the wolves after not seeing real game action for a couple months and coming out of the pen for the first time since his rookie campaign, in a playoff game, with the bases chucked and nobody out. The situation he was put in in this specific playoff game sucked; not a lot of pitchers would have succeeded given the circumstances.

But the pure "shit" was evident to me. Enough for me to say "bring his ass back, this dude has a lot in the tank" then free agency was popping off all winter. I got completely shit on for that, but ho hum, WSD knows a thing or two about baseball and was correct. Again. Sorry to jerk myself off, but it's true.

Sure, his health was shit and that's not something anyone can really control. Tommy John, shoulder bursitis and other shit? A lot of that is luck of the draw, but Rodon is healthy now, and his shit is better than it's ever been: 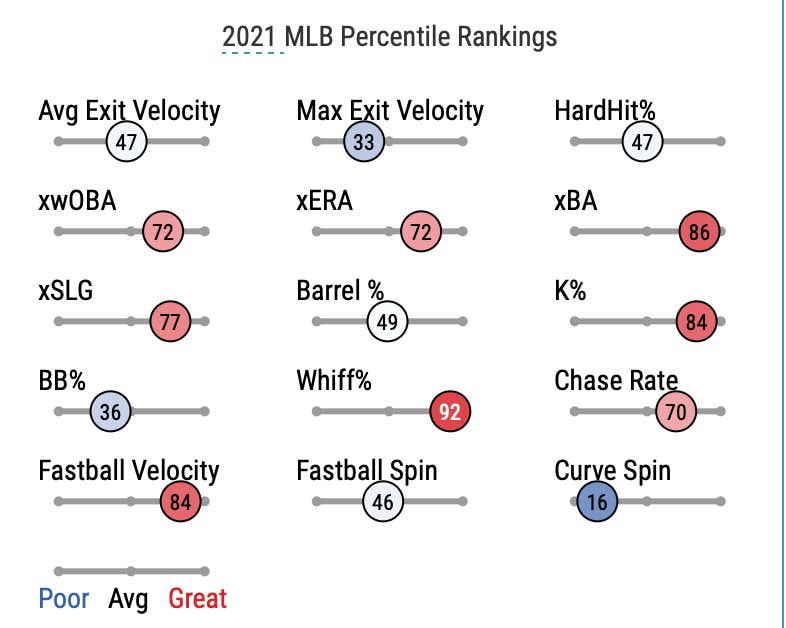 For a quick reference on how good a player looks, even if their stats are poor, one can take a glance at Baseball Savant. Type in the player's name and if there is a lot of "red", that's good. If there is a lot of blue, that's bad. The red means your underlying statistics suggest that you are either dominating or outperforming their stats, and if the latter is occurring, that their should be regression to the mean or beyond.

That's Carlos Rodon right now; his "shit" is filthy and that's proven by his expected batting average, slugging, era, OBP, and then his whiff rates against. That, my friends, you LOVE to see… and it lead to his first career no-no last week. Take a look at the spike in his fastball velo this year compared to the prior 6 seasons:

But my favorite part of Rodon's renaissance is not his pinpoint fastball command thus far; it's that he's working off his changeup. In his no hitter, his fastball command was surgical, but his changeup was his comfort pitch. At any given point of that game, he was throwing a changeup not just for a strike, but for an out pitch. It could have been a 2-0, 3-1, 1-0, whatever hitters count and he was pulling that string on that pitch with out even thinking about it. It was beautiful, and THAT'S the pitch that was always going to put him in the "pretty good back end starter if he finds fastball command" category to "top of the rotation ace that can no hit a team on any given night".

Should Rodon keep his feel for that pitch over the course of the entire 2021 season while pairing it with that 97MPH fastball, the White Sox have 3 or 4 starters who could make a push for the all star team and perhaps some post season awards. That's not an embellishment, that's just a fact. Gio, Lynn, Keuchel and Rodon.

You love to see it.