The Twisted History of Ice Hockey, with Large & Rear Admiral of Spittin' Chiclets 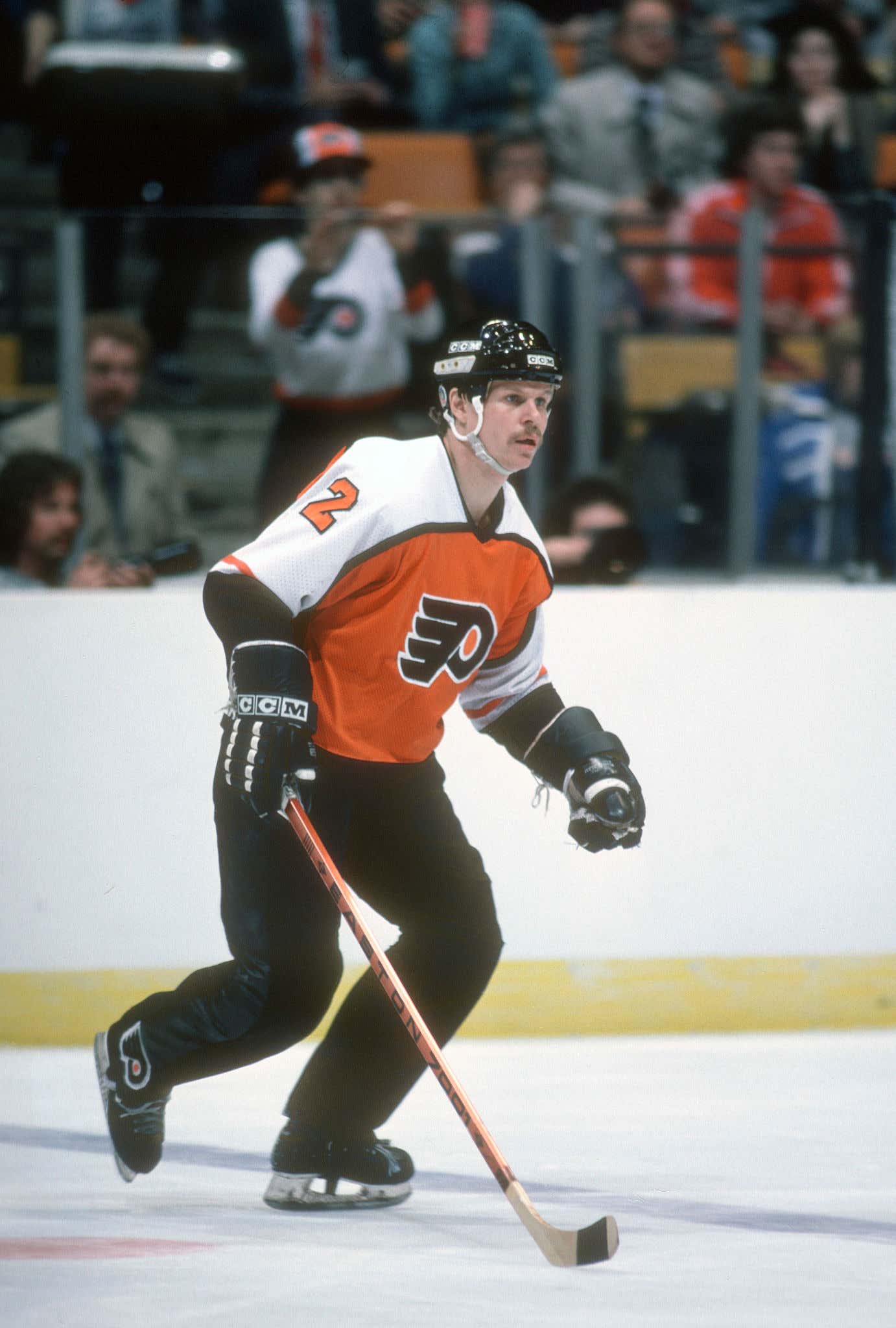 (Cooperalls, pictured above, made their NHL debut in 1981 when the Philadelphia Flyers took to the ice in their full-length pants versus the Detroit Red Wings. Following the 1982-83 season the NHL outlawed the long pants on the grounds of player safety, as the outer fabric of the pants was made out of what was comparable to a nylon windbreaker which was more slippery than the traditional hockey pants/knit socks combination, and any player who fell while wearing them would skid relatively unabated into the boards at a much faster speed than previously.) SOURCE: thirdstringgoalie

Twisted History is joined by Rear Admiral of Spittin' Chiclets, the biggest hockey show in the world.

From The Notes, Bad Injuries:

While playing with the Hartford Whalers in 1982, Mark Howe slid into the pointed metal center of a goal and cut a five-inch gash in his upper thigh. He was essentially impaled by the metal piece of the goal. The injury nearly ended his career and prompted the NHL to change the design of its nets so that there would no longer be a center portion that jutted up toward the goal line. The Whalers, feeling Howe was damaged goods after his injury, would later trade him to Philadelphia where he became a Norris Trophy-winning defenseman. SOURCE: FOX SPORTS

Goaltender Clint Malarchuk details the night he nearly bled to death after a skate gashed his neck:

Forever changed by the incident, Malarchuk later struggled mightily with depression and a dependence on alcohol that left a bullet in his head and nearly cost him his life.

WARNING THE FOLLOWING IS GRAPHIC VIDEO

In March of 1989 then Buffalo Sabres play-by-play announcers Ted Darling and Mike Robitallie were stunned as they were calling the hockey game on home ice when Malarchuk suffered a life threatening injury. A skate blade slashed his neck.

From The Notes, Tough Guys:

What Does It Take to Earn Respect? A Puck in the Face. Source: NYTIMES

Laperriere still remembers everything about being hit by Martin’s shot — the dive to block it, the impact, the ringing in his ears, the lost vision in his right eye. He even remembers the first thing he said to the Flyers’ trainer when he came out to attend to him.

“I said, ‘Can you see my eyeball?’” Laperriere said in a recent interview. “I really thought I’d lost my right eye.”

From The Notes, Stanley Cup Errors Through The Years:

FROM THE NOTES, SAD STORIES:

But before his third season with Atlanta, Heatley's life changed irrevocably. Speeding in a Ferrari 360 Modena with teammate Dan Snyder in the passenger seat, he lost control and a horrific crash tossed both him and Snyder from the vehicle.

Heatley sustained injuries, but it was Snyder who died six days later. Heatley pleaded guilty to second-degree vehicular homicide, speeding, failing to maintain a lane, and driving too fast for conditions. 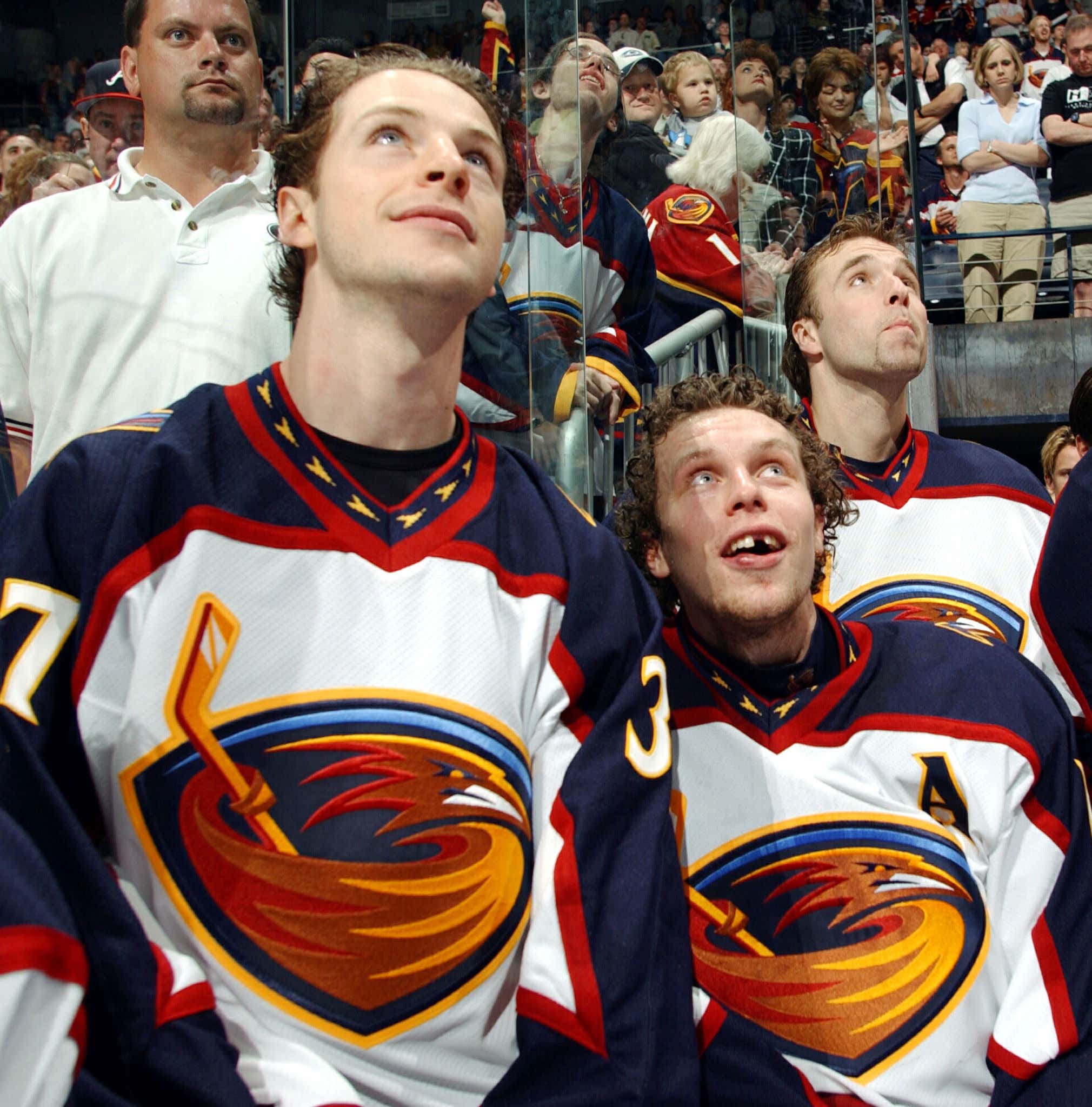 The Buffalo Sabres are the only team to have killed a live animal during a hockey game. In 1974, the team killed a bat during the game. SOURCE: PuckReport

Big Thanks to RA for coming on this week, stay tuned for more with him …

THIS WEDNESDAY, VIBBS RETURNS on 2/24, THE TWISTED HISTORY OF TATTOOS:

FOLLOW US ON TIK TOK FOR TWISTED HISTORY FACTS