On this week's We Gotta Believe, we discussed MLB owners and players fighting another round in the battle over money. It's been written, rewritten, blogged, and reblogged enough on this site and every other sports site since 1994 and I think everyone gets the gist where billionaires are asking millionaires to take a pay cut after they agreed to a pay cut.

What fascinates me is how the four major sports leagues in the country are reacting to this coronavirus bullshit just like they always do with everything else.

I personally think Adam Silver has been getting his dick sucked a little too much since he walked into a job at a league that was about to explode financially and his first order of business was taking a team away from a rich asshole nobody seemed to like. But there is no denying the NBA always seems to have its shit buttoned up, has the best relationship with its players, and seems to be the only league that gets it sometimes.

I honestly don't know what the fuck the NHL is doing. You could tell me they cancelled the season, have a date where they are coming back, or are just waiting to see what the NBA officially does (which to be honest is probably exactly what's happening, which isn't a bad thing for the NHL). The NFL is doing what the NFL always seems to do, which is act like they are Mike Alstott in the open field and any potential hiccup blocking them from their billion dollar endzone, including a global pandemic, is an undersized DB. 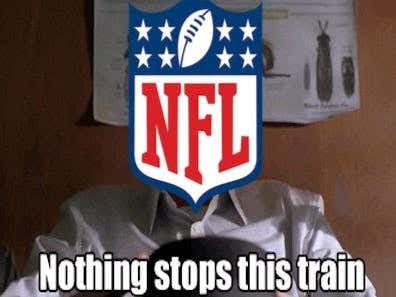 Then of course there's baseball, a sport that's already had a CATASTROPHIC labor stoppage in our lifetimes that was only saved by a home run race that later became a black eye for the sport that isn't exactly crushing it in terms of growth. However, the owners being unable to come to an agreement with the players for the better of the sport is so fucking baseball, it hurts. KFC asked if I thought there will be a baseball season considering there is baseball in Korea, soccer coming back tomorrow, and the NBA potentially coming back in the future. But considering everything I've seen from Major League Baseball in my life, I don't know how you could say the answer is Yes unless someone sits the owners down and explains that taking a bath in the short term is better than staring down the players to a draw in a pissing match and having no season, which could possibly be the only major sport to do so during this pandemic. They can do whatever they want though. I'm a Dinos fan right now and waking up to wins every morning beats the hell out of the Mets ripping my heart out before bed.

Thank you for sitting through my Sports Reporters rant. Also on this week's pod we discuss ARod and JLo bowing out of the Mets ownership race and delve into more of the Mets misery bracket.