(Nickelodeon) – Rise of the Teenage Mutant Ninja Turtles reimagines the characters in a fresh new way, featuring jagged-shelled Raphael as a snapping turtle, wielding twin tonfas as his weapons; Leonardo as a red-eared slider, using an odachi sword; Donatello as a soft-shell turtle, sporting a tech-bo staff; and Michelangelo as a box turtle, arming himself with a kusari-fundo. Along for the adventure is the Turtles’ most trusted ally, April O’Neil, a street savvy native New Yorker and Splinter, father figure and sensei to the Turtles.

Look, I get it. This is being made for kids. Small tiny children who don’t care about the 90’s and are born with smartphones + ADD in hand. But C’MON MAN. Are you kidding me with this shit? And I don’t really mean the designs themselves, those are alright, new weapons aside. Making them all different types of turtles is super try hard but so be it. The same guy who designed Samurai Jack created these, so visually I don’t doubt it’ll be entertaining… but HOWEVA!

What you’re not seeing in these pictures is the new character descriptions for each turtle. They turned the entire premise upside down and not in a cool way, more of a “I’m retroactively questioning my entire childhood” kind of way.

Might as well start here because this is the biggest slap in the face of all. They made Raph the oldest, which is fine, but they also made him the LEADER? What? And took away his sai’s? What? Why would you EVER take away those badass ninja forks, let alone try and replace them with “tonfas”. What? My dude, what THE FUCK is juice? And why does he look like he wants to eat me like a damn snack?

I only know my Raph one way. Angry, stubborn, and constantly trying to act like the leader but really always having Leonardo pull everyone together. This boggles my mind in ways I wish it did not. Speaking of our fearless double-sworded leader…

Alright so points here for Jean-Ralphio voicing him but the praise ends there folks. Only one sword now? Weirdly skinnier than Raph despite the same snackin’ off face? Oh and about that whole “being the leader thing…”

“The Turtles’ hold distinct personality traits and skills, including: Raphael, as the oldest and biggest brother, he is the leader full of enthusiasm and bravado; Leonardo, the self-professed ‘coolest’ brother possesses irreverent charm and a rebel heart; Donatello, a mechanical genius and tech wizard whose ninja skills are second only to his coding; and Michelangelo, the youngest brother, a skateboarder and artist who is wild and imaginative.”

Self professed? Cool? YO Leo did not give a FUCK about being cool and he certainly never begged for the credit. I already hate this Leonardo intensely, he really might as well be fucking Logan Paul. I always admired how he held the group together and was always self-LESS. Not a narcissistic dickhead with one blade, which is worse than two, who’s trying to fit-OUT instead of fit-IN.

Here they are giving away new weapons for everybody but for good ol’ Donny they whip up a… TECH-BO. Yikes. Making him a soft shell turtle on top of that certainly doesn’t help the Donatello street cred (the first Michael Bay movie was the only time he was portrayed as somewhat cool) and it is incredible that even in a twisted bizarro remake, Donny still can’t catch a break.

I respect that he’s not trying to eat me and has his best ninja scowl on, but he’s also voiced by this guy so, street cred need not apply. 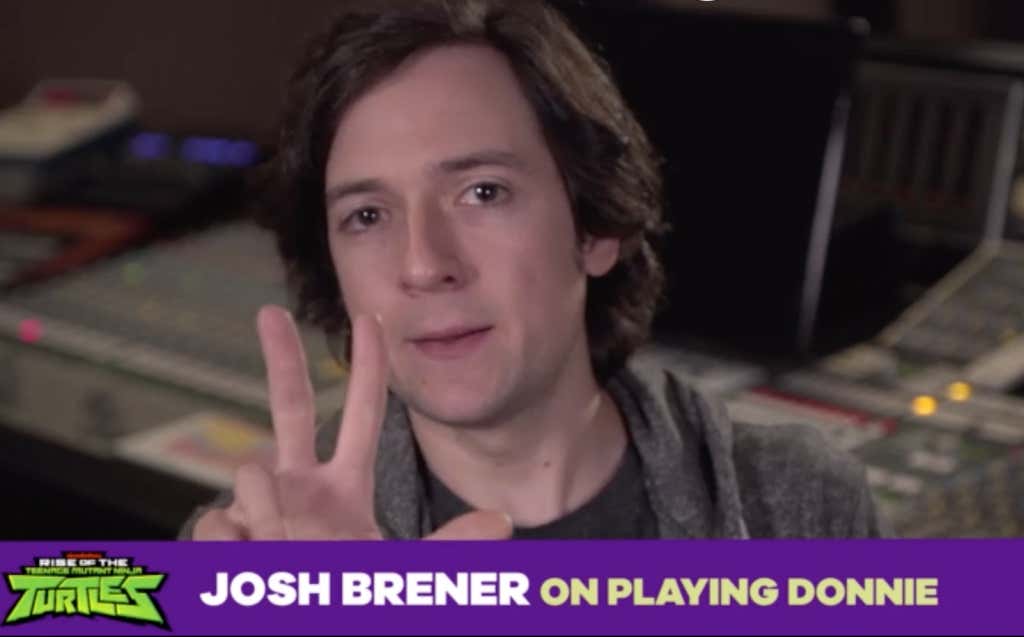 Taking away nun-chuks from Mikey is like putting anchovies on pizza. YOU DON’T FUCKING DO IT. There was a TMNT series before this that did the same thing and I’m guessing it’s literally because they don’t want kids running around nun-chukking people. Totally understandable. But I would’ve preferred a few PSA’s on the subject instead of giving him kusari-fundo, which is somehow NOT a STD.

I also don’t think they had to make him an actual child just to ham up the playfulness aspect. Gonna make things pretty awkward when he starts hitting on rising reporter April O’Neil I bet…

Yep! But they’re both like 10 years old so maybe it’s fine? I don’t mind the culture change, it’s actually the coolest part of this rebrand since April was originally African-American in the first comics published.

I’m just confused that aside from the word “Rise” in the title, I don’t really understand the same-age-angle with her and the turtles, and specifically not having April already in the workforce and part of the real world. That was a pretty big dynamic they may miss out on here. But she is the least offensive character in this series for me by far.

THEEEEEE RAT?!? If you didn’t read that as Shredder than GTFOH I honestly can’t believe you made it this far. Get yourself a kudos bar. I can sorta can fuck with this Splinter though, cause at least that is a rodent who is ready to GO and he’s gotta have some angry wisdom tucked away in there somewhere right? Maybe it’s The Rat who can save this series after all? If they make this a pseudo origin story where we really see what it took Splinter to whip them into shape, that could be good I guess? I would be shocked if that was the case as nothing in this setup seems familiar to me. Or good.

Now granted it’s not like I’ll be tuning in every September 2018 week to critique this show anyway, but it’s more about the feeling I got when I read all these things. Look at how streamlined the Turtles have been over the years… Subtle changes but essentially the same radical, teenager, COWABUNGA archetypes…

Now I don’t know what to think. I am indeed very offended by how they made all of this though, that much is for certain. Now kids are gonna grow up watching and think “Yea, THIS is the Ninja Turtles, awesome!” It is not awesome, sweet child. It is not the Teenage Mutant Ninja Turtles. And while it pains me to be a shitty old man yelling at cartoon clouds, frankly I don’t know what else to think or do.

But most importantly, as a 29 year old white male… Am I allowed to get upset about this in any way shape or form? It’s personal for me because the Ninja Turtles WERE my childhood. And since I hate losing childlike wonderment, also my current adulthood as well. I slept with a Ninja Turtle comforter up until last year.

So this does make me feel threatened, frightened, and lost. I am a loser no doubt, but that’s entirely my point. I don’t have much in this world. The Nic Cage comeback isn’t coming anytime soon, the future of Joker movies is still in the air, Paul Walker is STILL dead. I’m just looking for a W somewhere folks. So give me one here, or not. Gack Face