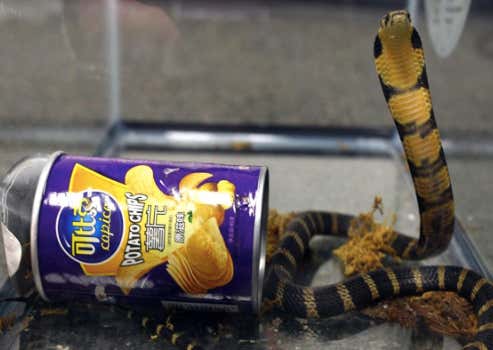 US Customs and Border Protection discovered the three, two-foot long killer snakes back in March when they intercepted a package from Hong Kong. According to a Department of Justice (DOJ) press release, each snake was crammed into its own emptied tube of knockoff Pringles chips.

Franco was likely trying to make a quick buck off the reptiles. Though snake-smuggling might seem like a pretty dangerous line of work, the live reptile trade brings in roughly $2 billion a year, according to the Humane Society. And although chip cans might be an odd trafficking vehicle, other smugglers have been known to use children’s books and cigarette packs to get the job done.

If convicted, Franco faces up to 20 years in prison. As for the animals, Franco’s have reportedly been welcomed into the San Diego Zoo.

Idiotttttt. All he had to do was use a regular Pringles can and he’d be rolling in the reptile dough. Instead, Franco decided to save a buck and go with the bodega bootleg. Weird move from a guy whose job is to make his product blend in. Can’t say I’m surprised though, reptile guys are some of the weirdest on the planet. Here’s some advice from a guy who accidentally brought weed on a plane once: don’t do anything that’s going to make you stick out. For example, when smuggling snakes in a Pringles tube, don’t use this: 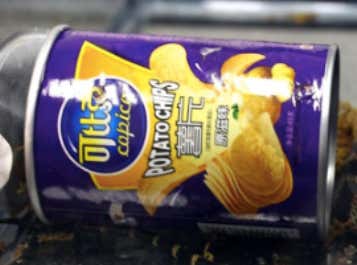 Or it will be searched. If not for the contents for the curiosity. Why wouldn’t they open it up? It looks like a mix of the classic Extra Saucy BBQ and the ever popular Sweet Chilli. Must have been a real mid-fuck to open a snake in can.

I can’t believe the live reptile trade brings in two BILLION dollars a year. I should grow my hair out, strap on a shark tooth necklace and get in the game. I’m sure I’d have a higher success rate than this idiot. I hope they throw the book at him. Not for smuggling the snakes just for being stupid. I enjoy an ingenious smuggling technique as much as the next guy but this isn’t it.